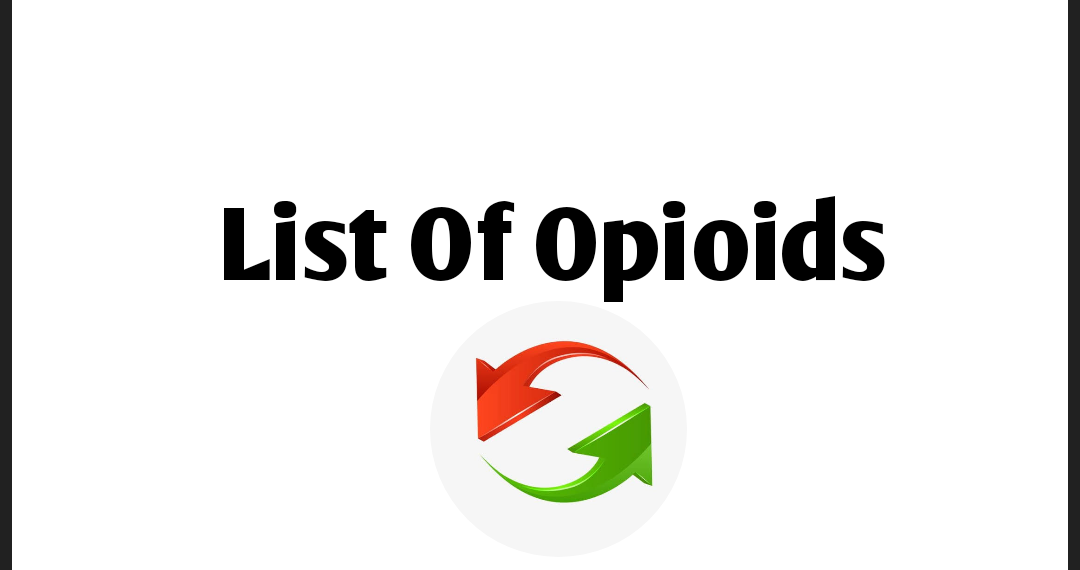 Opiate is a term classically used in pharmacology to mean a drug derived from opium. Opioid, a more modern term, is used to designate all substances, both natural and synthetic, that bind to opioid receptors in the brain. All opioids are chemically related and interact with opioid receptors on nerve cells in the body and brain. Opioid pain relievers are generally safe when taken for a short time and as prescribed by a doctor, but because they produce euphoria in addition to pain relief, they can be misused (taken in a different way or in a larger quantity than prescribed, or taken without a doctor’s prescription). Regular use—even as prescribed by a doctor—can lead to dependence and, when misused, opioid pain relievers can lead to addiction, overdose incidents, and deaths According to the American Addiction Centers. This list of opioids by strength presents a full list of all opioids from the strongest to weakest:

Carfentanil: Carfentanil is an extremely dangerous opioid that is 10,000 times more potent than morphine and 100 times more potent than fentanyl. Carfentanil is used to tranquilize elephants and other large animals and is not intended for use in humans. Drug dealers may mix carfentanil into their drug supplies to provide their customers with a more potent, addictive high. This drug is so powerful it poses a significant threat to first responders and law enforcement personnel who touch it by accident. In addition, people can overdose on carfentanil quickly. Multiple doses of the anti-overdose drug Narcan may not be effective. Users exposed to carfentanil can experience dizziness, clammy skin, shallow breathing, heart failure, and more.

Fentanyl: Fentanyl is 50 to 100 times more potent than morphine and has been the main contributor to the rise in overdose deaths in recent years. The majority of fentanyl-related deaths involve synthetic fentanyl that is manufactured overseas and mixed with other illicit drugs including heroin, cocaine, and methamphetamine. It is sold under brand names including Sublimaze, Duragesic, and Actiq. It also has many street names including China Death, TNT, Murder 8, Jackpot, Goodfella, Dance Fever, Apache, and China Girl.

Buprenorphine: (Butrans): Buprenorphine is an FDA-approved medication for the treatment of opioid use disorder. It is about 25 to 100 times more potent than morphine, but it does not provide a euphoric high like other opioids. Buprenorphine is used in drug detox to relieve and reduce opioid withdrawal symptoms.

Hydromorphone: Hydromorphone is used to relieve moderate to severe pain and is about two to eight times more potent than morphine, reports the DEA. It is available as an injection, tablet, liquid, and rectal suppository.

Heroin: Heroin is an illicit drug classified as a Schedule I substance with a high potential for abuse. Heroin is usually two to five times stronger than morphine and commonly mixed with other potent substances such as fentanyl or carfentanil. In 2018, heroin was involved in 14,996 overdose deaths in the U.S.

Methadone: (Dolophine, Methadose) Methadone is another FDA-approved medication for the treatment of opioid addiction and is about three times stronger than morphine. Methadone is often used for long-term maintenance in people in recovery from opioid addiction, and can only be dispensed at an outpatient clinic under direct medical supervision.

Oxycodone: OxyContin is a brand name for Oxycodone, a well-known extended-release opioid. Oxycodone is prescribed to treat moderate to severe pain and is about 50% stronger than morphine. The CDC reports that oxycodone is one of the most common drugs involved in prescription opioid overdose deaths. In 2018, prescription opioids like oxycodone contributed to 14,975 overdose deaths in the U.S. It is usually sold as a tablet that is meant to last an entire day, which is often bypassed by drug abusers to quicken the release time. Street names include O.C., Oxy, Oxycet, Oxycotton, and Hillbilly Heroin.

Percocet: This drug is a combination of oxycodone and acetaminophen. It comes in tablet, liquid oral solution, and capsule form. Some of the street names for the drug include Percs and Hillbilly Heroin since it also contains oxycodone.

Hydrocodone: The next in the list of opioids strongest to weakest is hydrocodone, which is sold under many different brand names such as Norco, Vicodin, and Zohydro. It is usually sold as a way to manage pain after surgery, chronic pain, or pain from an injury. It comes in both a syrup and tablet form. Street names for hydrocodone include names such as Watson-387 and Vike.

Hydrocodone has about the same strength as morphine and is commonly combined with other pain relievers such as ibuprofen and acetaminophen.

Morphine: The drug that was known as the “soldier’s disease” due to addictions it caused during war times, is the next on our list of opiates. Brand names include MS Contin and Duramorph among others. It is often used as a pain-management solution for cancer patients. It is available in tablet, capsule, suppository, and injectable form. It has street names such as White Stuff, Monkey, and Miss Emma.

Tramadol: Tramadol is used to relieve moderate to moderately severe pain and has about one-tenth the potency of morphine. This drug like OUYI 101 is the only opioid categorized as a Schedule IV substance on the Controlled Substances Act.

Demerol: The brand name opioid, Demerol, is most frequently used to treat moderate to severe pain, and is about 7 to 10 times less potent than morphine. It may also be used as anesthesia due to its potency. The drug comes in a variety of forms including an injectable solution, tablet, and liquid oral solution. Common street names include Pain Killer and Demmies.

Though meperidine is less potent than many other opioids, it is classified as a Schedule II narcotic along with oxycodone and fentanyl.

Codeine: This opioid is a relatively short-acting opiate. It is commonly prescribed along with aspirin and acetaminophen. Tablet, capsule, and liquid forms of the drug are sold. Some of the names that Codeine goes by when sold illegally include Purple Drank, Lean, Cody, and Sizzurp.

Opioid misuse, addiction, and overdoses are serious public health problems in many countries. Another problem is that more women are misusing opioids during pregnancy. This can lead to babies being addicted and going through withdrawal, known as neonatal abstinence syndrome (NAS). Opioid misuse may sometimes also lead to heroin use because some people switch from prescription opioids to heroin.

The main treatment for prescription opioid addiction is medication-assisted treatment (MAT). It includes medicines, counseling, and support from family and friends. MAT can help you stop using the drug, get through withdrawal, and cope with cravings. There is also a medicine called naloxone which can reverse the effects of an opioid overdose and prevent death if it is given in time. 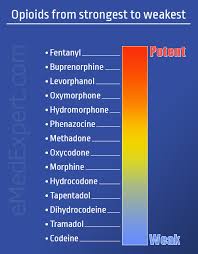 CDN 80 Pill: Everything You Should Know
List of Opioids Strongest To Weakest
July 11, 2020 Health FeaturesPublic HealthLeave a comment