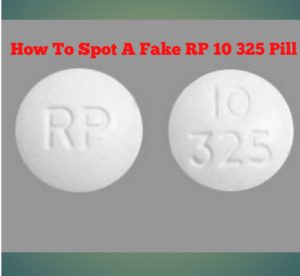 The White, Round Pill with imprint RP 10 325 has been identified as Acetaminophen and oxycodone hydrochloride 325 mg / 10 mg. It is supplied by Rhodes Pharmaceuticals L.P.  Acetaminophen is a mild painkiller while Oxycodone is a strong narcotic pain-reliever and cough suppressant similar to morphine and rapidly produces tolerance which can lead to addiction and adverse health effects. In combination, they belong to a class of drugs known as the opioid analgesics, which exert their action by blocking certain nerve cell receptors in the brain, this action alters the way the body responds to pain. SEE: How Long Does RP 10 325 Stay In Your System

Fake RP 10 325  Pills are imprinted with the same ” RP 10 325 ” imprint that was assigned to a legal Acetaminophen and oxycodone hydrochloride pill. However, they neither contain Acetaminophen nor oxycodone hydrochloride but mostly fentanyl, a synthetic opioid that is 50 to 100 times more potent than morphine and can be lethal in very small doses. Fentanyl is a prescription medication available in sprays, lozenges and patches used in treating severe pain.

However, the drug is illicitly manufactured in illegal labs in Mexico and China and smuggled across borders like carfentanil  from where drug cartels make them available on  street corners. Fentanyl  is blamed for thousands of overdose deaths in the U.S. and Canada.

Fake RP 10 325 pill can sometimes contain heroine, a highly addictive drug or THC (Tetrahydrocannabinol) the major psychoactive substance in cannabis (Marijuana). As fake drug manufacturers continue to acquire new technologies, it is becoming more difficult to tell a fake RP 10 325 pill from a genuine RP 10 325 pill. Nevertheless, visual inspection is still one of the most important parameters used  in fishing out a fake drug. Here is how to detect an RP 10 325 fake pill

Q& A on Oxycodone acetaminophen Combination

What is the brand name for oxycodone acetaminophen?

Is oxycodone acetaminophen a narcotic?

Oxycodone is an opioid pain medication, sometimes called a narcotic. Acetaminophen is a less potent pain reliever that increases the effects of oxycodone. Acetaminophen and oxycodone is a combination medicine used to relieve moderate to severe pain.

What milligram is oxycodone acetaminophen 5 325?

Percocet 5/325 is a brand name for the combination of 5 mg oxycodone and 325mg acetaminophen (APAP). It is an opioid analgesic used for moderate to severe pain.

People often wonder “is codeine in oxycodone,” and the answer is no. Codeine and oxycodone are two different types of opioids, and they wouldn’t be used in combination with one another.

How does oxycodone acetaminophen work?

This combination medication is used to help relieve moderate to severe pain. It contains a opioid (narcotic) pain reliever (oxycodone) and a non-opioid pain reliever (acetaminophen). Oxycodone works in the brain to change how your body feels and responds to pain. Acetaminophen can also reduce a fever.

What is the strongest pain killer?

Codeine is only about 1/10th as powerful as morphine. Opioids more powerful than morphine include hydromorphone (Dilaudid) and oxymorphone (Opana). But the strongest opioid in community use is fentanyl which, in its intravenous form, is 70 to 100 times more potent than morphine.

Can oxycodone and acetaminophen be taken together?

This pain reliever has two active ingredients: oxycodone and acetaminophen (also known as Tylenol, and often abbreviated as APAP). Too much acetaminophen can damage the liver and cause death.  Adults should not take more than 3,000 to 4,000 mg of acetaminophen each day. Also See RP 10

R P 5 325 (Acetaminophen and Oxycodone Hydrochloride 325 mg / 5 mg) .Acetaminophen/oxycodone is used in the treatment of chronic pain and belongs to the drug class narcotic analgesic combinations. Risk cannot be ruled out during pregnancy.

Does oxycodone make you sleepy?

Oxycontin may interact with other narcotic pain medications, sedatives, tranquilizers, sleeping pills, muscle relaxers, other medicines that can make you sleepy or slow your breathing, pentazocine, nalbuphine, butorphanol, or buprenorphine.

Can Acetaminophen and oxycodone kill?

In urine tests, traces of Percocet can generally be detected for 48 hours, starting 2 hours after the first dose. It can be found in the blood for just a day. The only long-term test is the hair test, which can detect oxycodone built up in the follicles for up to 30 days. ALSO READ: How to Spot fake RP 7.5/325

Prolonged use of opioids during pregnancy can result in physical dependence in the neonate and neonatal opioid withdrawal syndrome shortly after birth. Chronic use of opioids may cause reduced fertility; it is unknown whether these effects are reversible.

You can contribute your own quota to fight against fake, substandard and counterfeit drugs by sharing this information. You can also share your thoughts  with us and others in the comment section . Read : How To Spot An A 215 Pill Fake