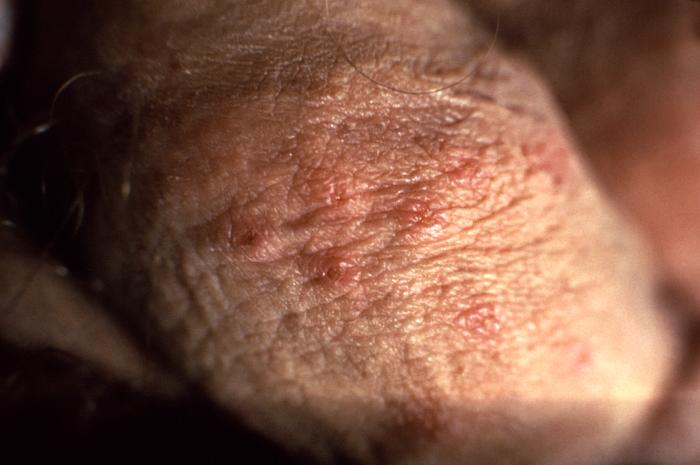 Sexually Transmitted Diseases (STD) are one of the major challenges in reproductive health. This is why the appearance of a rash on the penis can create concern about possible STD exposure. There are more than 25 types of STDs known to medicine, the most common ones are gonorrhea, syphilis, hepatitis B, HIV, genital herpes, Human papillomavirus (HPV), and trichomoniasis.

However, the reality is that there are several causes of penile rashes other than STDs. Some diseases which were previously classified as non-sexually transmitted diseases are presently been reclassified, due to new discoveries about their modes of transmission. See What Gonorrhea Looks Like

What is a Penis Rash and Why do I Have it on My Penile Shaft?

There are several conditions that can result in a rash on the penis, vagina, or in groin. Usually, these rashes are itchy and can be caused by something as simple as an irritation to a certain bath, lotion, or something as complex as an infection caused by a fungus, pubic lice, or a Sexually Transmitted Disease. Among the most common causes of rashes on the penis or in the groins are:

Jock Itch-(tinea cruris) – Jock itch is caused by a fungal infection that results from staying in sweat-soaked clothing for a long period of time. It is very common among athletes but can affect anyone. Those who wear tight clothes with low aeration potential are at risk because those type of clothing doesn’t allow for moisture to dry. Others at risk of Jock itch include obese individuals because they are prone to sweating in skin folds.

Physical activity that leads to sweating usually worsens the condition. Symptoms can affect the groin, thighs, and lower abdomen, but usually, the testicles are unaffected. The symptoms of Jock Itch include :

Balanitis – Balanitis results in the swelling of the tip/head or foreskin of the penis. It is a painful condition that is usually caused by poor hygiene practices and lifestyles. This type of rash on the penis is caused by bacterial overgrowth around the area resulting in an infection. In addition, non-bacterial irritation can also cause balanitis. Such irritation can be caused by bar soap that dries out the skin, scented or perfumed soaps, lotions, and sprays.

Yeast Infection –  yeast infection is caused by an overgrowth of fungus, this condition is also known as candidiasis. It is characterized by a red rash on the penis and itching and/or burning on the tip of the penis which is more frequently seen in uncircumcised men than their circumcised counterparts.

Psoriasis – this rash is characterized by bright red, shiny patches on the penis and/or genitals. It typically is not flaky or scaly when it occurs in the genital region due to the area being well-covered, so it retains more moisture than other parts of the body.

Molluscum contagiosum –This is another condition that can cause Rash On The Penile Shaft. It is a viral infection that affects the skin and presents as a firm, isolated, round bump that can sometimes be itchy and inflamed. Also See Blue Wafflé Disease: WebMD Separates Facts From Fiction

Contact Dermatitis – This is a condition that causes red, itchy, irritated skin that occurs after the use of a new skincare product such as soap. This skin appearance in contact dermatitis can resemble a burn and is sometimes caused by chemicals in cosmetics, latex gloves or condoms, poison oak, and jewelry.

Razor burn or razor bumps – These are small, irritated red bumps that appear on the genital area due to trapped bacteria or ingrown hairs. It is quite common for itchy razor bumps to appear on or near the genitals after shaving.

Which STDs Can Cause a Penis Rash?

Having an itchy rash on the penis doesn’t mean you necessarily have an STD or that your partner is cheating. In this section, we will be looking at the sexually transmitted diseases that can cause a rash on the penis.

Scabies is mites caused by an organism named Sarcoptes scabies that can be passed from close contact with an infected individual, including sexual contact. The mite bites leave red itchy spots that look like a rash on many parts of the body, including the groin and genitals. Pubic lice, also known as crabs, can leave red dotted spots that look like a rash on the penis. This condition is caused by the lice bites, and sometimes the lice themselves can be seen in the groin, especially among individuals with very poor hygiene standards.

Primary syphilis can also cause rashes to appear on the genitals. This STD produces a red, painless ulcer on the penis or groin, but secondary syphilis can become more widespread, causing raw, red mucosal surfaces (in the genital area, inside the mouth, throat, and anus) including a non-itchy rash that can occur on the palms of the hands and soles of the feet. Another STD that can cause a rash on the penile shaft is Genital herpes outbreaks which are accompanied by clusters of small, fluid-filled blisters that eventually burst and become red and scaly. These outbreaks are typically followed by pain or a burning sensation.

The appearance of a rash on the penis can sometimes be a sign of penile cancer. The most common symptom of penile cancer is some form of a rash, wart-like growth, or lump on the penis, especially on the glans (head of the penis). Most men noticed a rash or wart-like growth on the end of their penis. This was usually bright or crimson red although some men found that it was white or slightly discolored compared to the rest of the glans. A rash or wart-like growth may be harmless. However, because it can be a sign of many conditions, some of which can have life-changing consequences it is best to discuss it with your doctor.

What is The Cause of Red Spots on My Penis After Sex?

Red spots on the penis can be caused by various factors such as an infection with Trichomonas vaginalis which manifests as red spots on the penis. In addition, lack of proper lubrication during sex, diabetes, lice infestation, or allergies can also cause red spots to appear on your penis after sex. Only a proper laboratory test in a hospital can determine the specific cause of your penile red spots.

What Penis Rash Treatment and Prevention Option Do I Have?

Treatment of penile rash is dependent on the cause of the rash and the organism or inanimate object implicated. Where a microorganism is implicated,  your doctor is likely to place you on antibiotics or anti-viral medications to help you overcome the infection and get rid of the rash on the penis. Where a penile rash is caused by an inanimate object most physicians will advise you to avoid such use as much as possible to avoid triggering an allergic reaction. In addition, to prevent rashes from allergic reactions, you can take antihistamines when at increased risk. To prevent penis rashes caused by STDs, always practice safe sex, use a condom that protects against sexually transmitted diseases and avoid multiple sexual partners.

Maintaining a healthy diet and lifestyle will also keep you in the best shape, boost your immune system and help fight off any infections that could cause genital rashes. When you have a specific concern, consult your doctor for advice. Read:  7 Things Sexually Transmitted Diseases Destroy

What is HPV? Causes, Treatment, Prevention