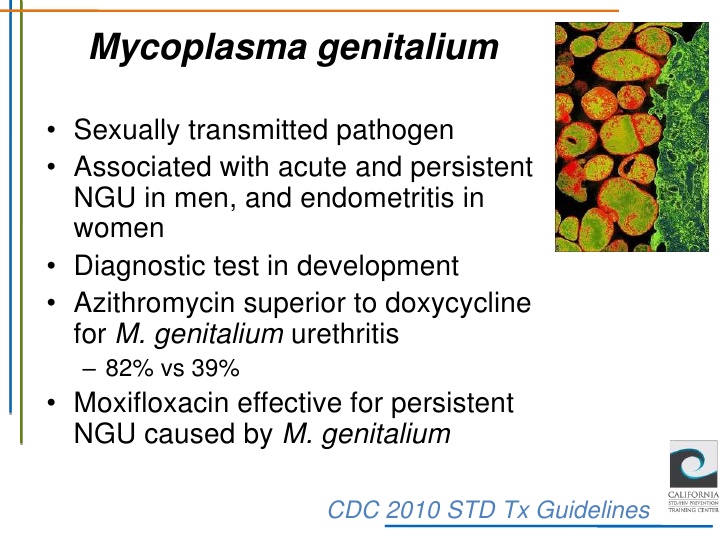 Mgen is responsible for many conditions including cervicitis and pelvic inflammation in women and urethritis in both men and women. With a genome sequence of 0.58 Mbp and 475 genes, this organism was regarded as a cellular unit with the smallest genome size (in Mbp) until recently when an even smaller unit was discovered.

According to the Centers for Disease Control (CDC), Mycoplasma Genitalium is more common than gonorrhea in the United States. The disease also affects around 250,000 people aged 16-44 in the United Kingdom representing 1 percent of the population according to UK census data.

In men, Mgen infection causes urethritis (infection of the urethra, the urinary canal leading from the bladder to exit at the tip of the penis). Symptoms of this condition may include:

In women, Mgen infection causes infection of the cervix (opening of the uterus (womb) at the top of the vagina). Symptoms are usually absent but may include:

Without proper treatment, infection of the cervix may spread to the Fallopian tubes (tubes leading from the ovary to the uterus) and cause pelvic inflammatory disease (PID). This may be without symptoms, but there may be:

Polymerase chain reaction (PCR) test in a pathology laboratory on urine or a sample of discharge from the cervix or urethra. However, a PCR test for Mgen is not readily available and many infections in men will be labeled as non-specific urethritis. The diagnosis is usually made when symptoms are present and tests for gonorrhea and chlamydia are negative and further testing for M. genitalium is undertaken. READ: Blue Wafflé Disease: WebMD Separates Facts From Fiction

How is it treated?

The following antibiotics are recommended :

Doxycycline for 7 days followed by azithromycin for 3 days

Moxifloxacin for 10 to 14 days

Reduce the Number of Sex Partners

Reducing your number of sex partners can decrease your risk for STDs. It is still important that you and your partner get tested, and that you share your test results with one another

No sex until antibiotic treatment is completed and your usual sexual partner has completed treatment.

Stop having sex with others until your usual sexual partner has completed treatment, and do not have sex for the next 7 days after taking medication. A follow-up test must be done to make sure that treatment has cleared the infection. People are advised to avoid sexual intercourse until they and their partner have been treated – ideally waiting until 5 weeks after the start of treatment when a test has shown they are clear of the MG bacteria.

Mutual monogamy means that you agree to be sexually active with only one person, who has agreed to be sexually active only with you. Being in a long-term mutually monogamous relationship with an uninfected partner is one of the most reliable ways to avoid STDs. But you must both be certain you are not infected with STDs. It is important to have an open and honest conversation with your partner.