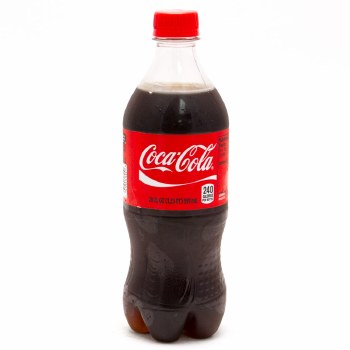 Coca-Cola, or Coke, is a carbonated soft drink manufactured by The Coca-Cola Company. Originally marketed as a temperance drink and intended as a patent medicine, it was invented in the late 19th century by John Stith Pemberton and was bought out by businessman Asa Griggs Candler, whose marketing tactics led Coca-Cola to its dominance of the world soft-drink market throughout the 20th century. The drink’s name refers to two of its original ingredients: coca leaves, and kola nuts (a source of caffeine). The current formula of Coca-Cola remains a trade secret; however, a variety of reported recipes and experimental recreations have been published.

The Coca-Cola Company produces concentrate, which is then sold to licensed Coca-Cola bottlers throughout the world. The bottlers, who hold exclusive territory contracts with the company, produce the finished product in cans and bottles from the concentrate, in combination with filtered water and sweeteners. A typical 12-US-fluid-ounce (350 ml) can contains 38 grams (1.3 oz) of sugar (usually in the form of high-fructose corn syrup). The bottlers then sell, distribute, and merchandise Coca-Cola to retail stores, restaurants, and vending machines throughout the world. The Coca-Cola Company also sells concentrate for soda fountains of major restaurants and foodservice distributors.

The Coca-Cola Company has on occasion introduced other cola drinks under the Coke name. The most common of these is Diet Coke, along with others including Caffeine-Free Coca-Cola, Diet Coke Caffeine-Free, Coca-Cola Zero Sugar, Coca-Cola Cherry, Coca-Cola Vanilla, and special versions with lemon, lime, and coffee. Coca-Cola was called Coca-Cola Classic from July 1985 to 2009, to distinguish it from “New Coke”. Based on Interbrand’s “best global brand” study of 2015, Coca-Cola was the world’s third most valuable brand, after Apple and Google. In 2013, Coke products were sold in over 200 countries worldwide, with consumers drinking more than 1.8 billion company beverage servings each day. SEE: Coke Zero: Sugar Content, Effect On Ketosis, Pregnancy, Diabetes

Is it true that you can die from eating Mentos and drinking?

A carbonated beverage is packed full of dissolved carbon dioxide gas, which forms bonds with water. While the soda is in the bottle, the gas is kept in solution by the bottle’s pressurized conditions. When you pour some soda into a glass, some gas escapes and forms foam, but most stay trapped by the surface tension of the water. But all those gas bubbles want to escape, making it no wonder that soda makes you burp.

A Diet Coke and Mentos eruption is a reaction between the carbonated beverage Diet Coke and Mentos mints that causes the beverage to spray out of its container. The candies catalyze the release of gas from the beverage, which creates an eruption that pushes most of the liquid up and out of the bottle. Putting mentos into your stomach and then drinking coke, would, more or less just result in belching; perhaps faster than just ingesting coke alone. The coke will also foam up, which may irritate the stomach and cause you to vomit.

The only danger lies in that some people are unable to belch enough to release the gas before it gets too much pressure; this would cause stomach aches and maybe even a rupture, but that is very unlikely as most people would vomit before that happened.

Many people try to ingest mentos and coke together and often end up mixing them in their mouth; which causes rapid gas release, at a rate at which most people cannot keep their mouth sealed; this results in the person spewing out the foaming coke. But in rare cases could result in the Soda entering the lungs. SEE: Renerve Plus Tablet Uses And Side Effects

Recently, a High court held that high levels of benzoic acid and sunset additives in the popular soft drinks could pose a health risk to consumers when mixed with ascorbic acid, commonly known as vitamin C, according to CNN.

Justice Adedayo Oyebanji ordered the Nigerian Bottling Company (NBC) to place written warnings on Fanta and Sprite bottles against drinking them with vitamin C, and awarded costs of two million naira ($6,350) against the National Agency For Food and Drug Administration and Control (NAFDAC) for failing to ensure health standards.

“It is manifest that NAFDAC has been grossly irresponsible in its regulatory duties to the consumers of Fanta and Sprite manufactured by Nigeria Bottling Company,” the judge said. “NAFDAC has failed the citizens of this great nation by its certification as satisfactory for human consumption products … which become poisonous in the presence of ascorbic acid.

Nevertheless, the soft drinks companies are evolving with vitamin fortified drinks. One of those drinks, Diet Coke Plus, will have vitamins B3, B6, and B12 and two minerals that are part of a healthy diet. Pepsi’s new drink will come in different flavors and have vitamins B3, B6, and E. Some experts say drinking the new sodas with vitamins will be better than drinking regular soda.

Side Effects of Mixing Coke and Guinness Stout

Mixing Coke and Guinness Stout to produce the Trojan horse which requires equal pours of Guinness Stout and Coke in a pint glass is an unhealthy practice with far-reaching consequences. Adding soft drinks to alcohol makes the resultant mixture more acidic which in turn makes it a harder hit to the liver. Alcohol interferes with memory and learning. Alcohol increases the likelihood that you will use other drugs. Alcohol increases your risk of developing cancer. Alcohol can lead to liver disease and other severe, chronic diseases. SEE: Side effects of Fearless Energy Drink