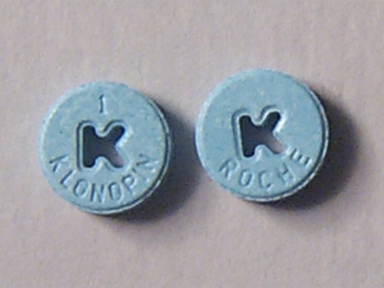 A drug test is a technical analysis of a biological specimen, for example urine, hair, blood, breath, sweat, and/or oral fluid/saliva—to determine the presence or absence of specified parent drugs or their metabolites. Major applications of drug testing include detection of the presence of performance enhancing steroids in sport, employers and parole/probation officers screening for drugs prohibited.

Klonopin is a prescription medicine used to treat the symptoms of seizures and panic disorder. Klonopin may be used alone or with other medications. Klonopin belongs to a class of drugs called Antianxiety Agents, Anxiolytics, Benzodiazepines, Anticonvulsants, Benzodiazepine.

Klonopin is a potentially habit-forming benzodiazepine, with some people becoming addicted to it in as little as a few weeks. Many people have become addicted to Klonopin taking only the amount prescribed by their doctor. Klonopin blocks special receptors in the brain to reduce anxiety, stress, and difficulty relaxing. Once a person is addicted to the drug, their brain can no longer produce feelings of relaxation and calmness without it. This is why people addicted to Klonopin struggle to quit and are unable to function normally when they don’t have it.

Some signs that you may have a Klonopin addiction include:

Klonopin addiction starts when the user builds a tolerance to the drug, which means they need larger doses to get the same effects they once had with smaller doses. Some users then start taking more than they were prescribed, or using the drug just to get high.

Singer and songwriter Stevie Nicks publicly shared her struggles with a Klonopin addiction. Because the drug was prescribed by her doctor, Nicks said she had a false sense of security about using it.

A long-acting benzodiazepine, Klonopin is the brand name for clonazepam. Klonopin slows down brain activity to help users feel relaxed. It was initially formulated to help people with epilepsy manage seizures. Later, the drug’s rapid and powerful calming effects were also recognized as a way to treat panic attacks. Klonopin is often prescribed to ease anxiety and withdrawal symptoms from alcohol and other addictive substances. Doctors may also prescribe Klonopin for short-term insomnia. The drug is swallowed as a blue tablet or taken as a quick-dissolve tablet placed on the tongue as often as three times a day. Slang terms for Klonopin include k-pins, tranks, downers or benzos.

Klonopin isn’t generally recommended for long-term use because of its addictive potential. The drug has a relatively long half-life, or length of time the drug is active in the body.

How Long Do Benzos Stay in the Body?

Several factors play a role in how long benzodiazepines stay in your system. They can stay in urine 3 to 6 weeks, hair up to 90 days, and blood 2-3 days. Once Klonopin’s effects wear off, addicted users start to experience symptoms of anxiety and insomnia. Many people attempting to quit Klonopin relapse when withdrawal symptoms become unbearable.

Due to its long half-life of 20-50 hours, Klonopin stays in the body for a longer time than other drugs with relatively shorter half-lives. The half-life of a drug refers to the amount of time it takes a person’s body to eliminate half of the dose.

The following are some general timeframes for how long Klonopin will show up on different types of tests based on case studies.

It is important to note that Klonopin may not show up on common urine tests. The test may be able to show that the drug is present, but it may not be able to determine the amount.

Individual factors can affect the result of a test, including:

How Do You Detox From Klonopin?

If you have been abusing Klonopin, a medical detox program can help ensure a safe withdrawal.

NAMI warns that clonazepam use should not be stopped abruptly or without talking to your doctor first. If stopped too abruptly, unpleasant side effects are likely to occur, and some can even be life-threatening.  Withdrawal symptoms may not develop for more than a week, reach peak intensity during the second week, and fade during the third or fourth week. If you have been taking the medication under the care of a physician, you can work with them on a tapering schedule to gradually reduce the dose. The recommended tapering schedule is to decrease the dose by 0.125mg every 3 days until you are no longer taking the drug. However, talk to your doctor to determine the best dose for you. READ: How to Spot A Fake Klonopin Pill

Does LSD (Acid) Show Up On A Drug Test