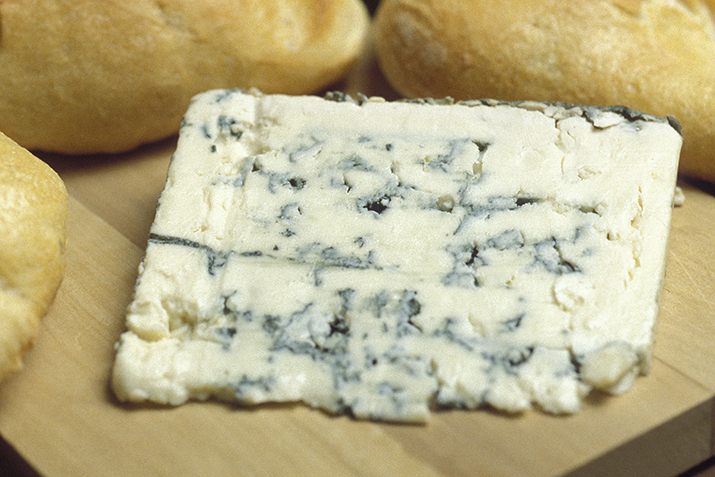 Gorgonzola is a veined Italian blue cheese, made from unskimmed cow’s milk. It can be buttery or firm, crumbly and quite salty, with a “bite” from its blue veining. Traditionally, it has come from the Northern Italian town for which it is named and is a young cheese that ripens within three to six months. Blue cheeses have had different bacteria and molds introduced during the ripening process to impart a distinctive sharp, earthy flavor. It’s rich and creamy and generally used uncooked as a dessert cheese or in salads or dips. Two types of Gorgonzola are readily available, Dolce and Piccante. Dolce, or Sweet Gorgonzola, is sweet, milky, and creamy, with hints of spice. It’s aged for about three months. Piccante is more piquant and crumbly. It’s aged six months or more. It’s also called Gorgonzola Picante or Mountain Gorgonzola.

Gorgonzola is very rich in vitamin B2, B6, B12, which are extremely important for the nervous system and the immune system”. For these reasons, Gorgonzola is known and loved all over the world, as well as being the third most important Italian cow milk DOP cheese. Gorgonzola is one of the world’s oldest blue-veined cheeses.

What do you eat Gorgonzola cheese with?

What kind of wine goes with Gorgonzola cheese?

How to Pair Wine to Cheese

Is there a difference between blue cheese and Gorgonzola?

Roquefort and Gorgonzola are two kinds of blue cheese. Roquefort is a French sheep’s milk cheese and Gorgonzola is Italian and made from cow’s milk. Roquefort has a sharper flavor but is not as strongly flavored as robust and aromatic as gorgonzola.

Is Dolcelatte the same as Gorgonzola?

Dolcelatte is a blue-veined Italian soft cheese. The cheese is made from cow’s milk and has a sweet taste. The fat content of dolcelatte is higher than Gorgonzola at about 50%. Dolcelatte is comparable in taste and texture to dolceverde and torte gaudenzio cheese.

How long does Gorgonzola last?

When blue cheese is kept in the refrigerator, it can last quite a while. Check the expiration date on your cheese — in most cases, it will remain good for one to two weeks past the date. That typically means it will last in the fridge for three to four weeks. Throw away refrigerated cheese after three to four weeks

Is it OK to eat Gorgonzola while pregnant?

During pregnancy, you would need to avoid soft cheeses such as brie, Camembert, Roquefort, feta, Gorgonzola, and Mexican-style cheeses that include queso Blanco and queso fresco, unless they clearly state that they are made from pasteurized milk. All soft non-imported cheeses made with pasteurized milk are safe to eat.

What are the Side Effects of Gorgonzola Cheese?

High Cholesterol – Having an excessively high level of lipids in your blood (hyperlipidemia) can have an effect on your health.  Gorgonzola cheese may increase your cholesterol levels because it provides 5 grams of saturated fat per serving. According to the Cleveland Clinic, a heart-healthy diet should limit saturated fat to not more than 25 percent of daily calories and less than 7 percent of those should be from saturated fat. Each ounce of gorgonzola contains 21 milligrams of dietary cholesterol, and healthy individuals should not have more than 300 milligrams per day.

High Blood Pressure- High blood pressure, also called hypertension, is dangerous because it makes the heart work harder to pump blood out to the body and contributes to hardening of the arteries, or atherosclerosis, to stroke, kidney disease, and to heart failure. Each ounce of gorgonzola cheese provides 391 milligrams of sodium. A high-sodium diet makes it more difficult to control your blood pressure, and healthy adults should not have more than 2,300 milligrams of sodium per day.

Poor Calcium Content –Your body needs calcium to build and maintain strong bones. Your heart, muscles, and nerves also need calcium to function properly. Some studies suggest that calcium, along with vitamin D, may have benefits beyond bone health: perhaps protecting against cancer, diabetes, and high blood pressure. Choosing gorgonzola cheese can lead to inadequate intake of calcium because gorgonzola cheese has less calcium for the number of calories than other dairy products have. An ounce of gorgonzola cheese has 99 calories and 150 milligrams of calcium, while a cup of yogurt or reduced-fat milk provides about 90 to 130 calories and 300 to 450 milligrams of calcium, according to the 2010 Dietary Guidelines from the U.S. Department of Health and Human Services. Calcium is an essential mineral for strong bones.

Gorgonzola Cheese Was Named After A Town In Which Country?

Gorgonzola cheese is named after the Northern Italian of  Gorgonzola an Italian town of  20,000 inhabitants in the Metropolitan City of Milan, Lombardy. It is part of the territory of the Martesana, northeast of Milan.