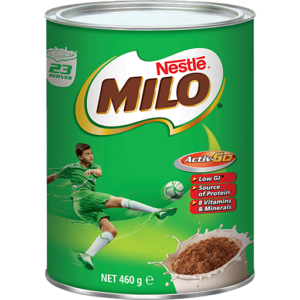 Milo is a chocolate and malt powder typically mixed with hot water or milk (or both) to produce a beverage popular in Oceania, South America, West Indies, Southeast Asia and parts of Africa. Produced by Nestlé, Milo was originally developed in Australia by Thomas Mayne in 1934. Most commonly sold as a powder in a green tin, often depicting various sporting activities, Milo is available as a premixed beverage in some countries, and has been subsequently developed into a snack bar, breakfast cereal and protein granola. Although Its composition and taste differ in some countries Milo is generally made with four main ingredients; malt barley, milk powder, sugar and cocoa, plus 8 vitamins & minerals .

Milo contains 1,680 kJ (402 calories) in every 100 g of the powder, mostly from carbohydrates. Carbohydrates can be used for energy by the body, which is the basis of Milo being marketed as an energy drink. Most of the carbohydrate content is sugar. Milo dissolved in water has a Glycemic Index (GI) of 55, lower than Coca-Cola’s GI of 63.[28] However, milk has a much lower GI of 30 – 33, so mixing Milo into a mug of milk yields an overall GI closer to 33.The Milo website states that the drink is high in calcium, iron and the vitamins B1, B2, B6, B12. Milo is advertised as containing “Actigen-E”, but this is just Nestlé’s trademarked name for the vitamins in the Milo recipe. Milo also  contains some theobromine, a xanthine alkaloid similar to caffeine which is present in the cocoa used in the product.

Milo is  widely marketed as a sports drink  because of its rich energy capacity. Milo contains 1,680 kJ (402 calories) in every 100 g of the powder, mostly from carbohydrates. Carbohydrates are referred to as energy-giving foods. They provide energy in the form of calories that the body needs to be able to work, and to support other functions. Carbohydrates are needed in large amounts by the body.

Rich Source of B Vitamins

Milo contains vitamins B1, B2, B6, B12. B vitamins play a vital role in maintaining good health and well-being. As the building blocks of a healthy body, B vitamins have a direct impact on your energy levels, brain function, and cell metabolism. Vitamin B complex helps prevent infections and helps support or promote: cell health. B vitamins are also important for energy levels. The vitamins also provide a host of other benefits. Among other things, vitamin B6 helps keep blood sugar within a normal range, vitamin B12 protects against anemia, and folate (folic acid) helps prevent changes to your DNA that could lead to cancer.

Milo elevates the capacity of physical endurance and also the immunity of the body because it’s a rich vitamin source. Vitamin B-6 in particular helps the body make new red blood cells, which carry oxygen throughout the body. It also helps keep the immune system strong. Biotin is essential for healthy hair, nails, and nerve function. If you have vitamin B12 deficiency, you could become anemic. A mild deficiency may cause no symptoms. But if untreated, it may lead to symptoms such as: Weakness, tiredness, or lightheadedness. ALSO SEE: Lucozade: Benefits, Pregnancy, Diabetes, Side Effects

Milo helps you fulfill the daily iron requirement of your body which is essential for the proper oxygen transportation in your body. Iron is an essential element for blood production. About 70 percent of your body’s iron is found in the red blood cells of your blood called hemoglobin and in muscle cells called myoglobin. Hemoglobin is essential for transferring oxygen in your blood from the lungs to the tissues. Iron also helps to preserve many vital functions in the body, including general energy and focus, gastrointestinal processes, the immune system, and the regulation of body temperature. The benefits of iron often go unnoticed until a person is not getting enough.

The perfect flow of oxygen throughout your body facilitated by iron rich milo helps in getting rid of the toxins and waste products. When excess CO2 builds up in your blood, it causes an imbalance between your blood oxygen and carbon dioxide levels, which can cause serious symptoms and oxygen deprivation.

Milo, when taken with milk regularly, optimizes your calcium intake. Calcium level is higher in children who take Milo with milk daily when compared to children who drink plain milk. Milo powder is also fortified with extra calcium. Adding Milo to milk boosts the calcium content of milk by 65%. It’s not too late to start encouraging your teenager to eat more dairy foods to up their calcium. Calcium requirements are actually the highest in young people aged 12-18 years.

Is Milo Safe During Pregnancy

Milo is good to drink during pregnancy. It provides all nutrients to the growing baby. You can start in any stage of pregnancy, the earlier the better. Cocoa based drinks like Milo are POSSIBLY SAFE in pregnancy and during breast-feeding when used in moderate amounts or in amounts commonly found in foods. But be sure to monitor your intake. Caffeine is also a concern during breast-feeding.

Side Effects of Milo

Although it provides vital nutrients to your body, you should consider the following effects that may be caused by the consumption of Milo:

Although it boosts your energy level and keeps you alert and helps you concentrate better, many health experts and nutritionists, nowadays, considers such sugar based health drinks bad for health in the long run. Experts are of the opinion that the instantaneous elevation of energy due to high sugar content may serve you short term hike in energy levels but over long time period, you are eventually going to be dehydrated and lethargic. It may cause cavities and decay in your teeth, especially in children, because of high amount of chocolate and sugar content. Theobromine can be  toxic to animals. READ : Health Benefits and Side Effects of Golden Morn