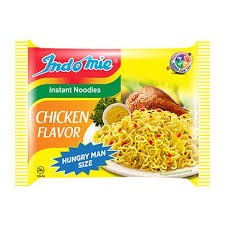 Indomie is a brand of instant noodles produced by the Indonesian company Indofood. Indomie has been produced in Nigeria since 1995 where it is a popular brand. Indofood has the largest instant noodle manufacturing plant in Africa. It has grown to become a household name in Nigeria owing to its delightful taste and wholesomeness. Transcending across all age groups, the brand has managed to win over the hearts and taste palates of both the young and the old. In this article we will delve into the health benefits and side effects of Indomie.

Indomie Noodles is a good source of several vitamins and minerals, for example indomie contains Vitamin B6 providing 20% of the recommended  daily intake(RDI), the quantity of a particular nutrient which should be consumed daily in order to maintain good health. Vitamin B6, along with the other B vitamins, helps the body turn food into energy. On its own, vitamin B6 has many other uses that are important in maintaining a healthy body and developing a healthy brain.

It’s a Good Source of Energy

A 70g small size of indomie provides 320 calories (kcal) and contains 58g of carbohydrates. The four primary functions of carbohydrates in the body are to provide energy, store energy, build macromolecules, and spare protein and fat for other uses. Glucose energy is stored as glycogen, with the majority of it in the muscle and liver. A deficiency of glucose, or low blood sugar, is called hypoglycemia. If the body has insufficient carbohydrate intake or stores, it will consume protein for fuel. This is problematic because the body needs protein to make muscles.

Indomie contains around 7g of protein in a 70g size. Proteins are large, complex molecules that play many critical roles in the body. They do most of the work in cells and are required for the structure, function, and regulation of the body’s tissues and organs. Protein has many roles in your body. It helps repair and build your body’s tissues, allows metabolic reactions to take place and coordinates bodily functions. In addition to providing your body with a structural framework, proteins also maintain proper pH and fluid balance.

Indomie is a Source of Dietary Fiber

Indomie is a source of Dietary Fiber which adds bulk to your diet and makes you feel full faster, helping you control your weight. It helps digestion and helps prevent constipation. If you are constipated this means your fiber intake is too low. If you have a healthy colon, you will have regular, frequent and soft bowel movements. If you eat foods low in fiber, they take longer to digest, lead to irregular bowel movements, loose stools and can also cause stomach pain. Individuals with high intakes of dietary fiber appear to be at significantly lower risk for developing coronary heart disease, stroke, hypertension, diabetes, obesity.

Indomie is fortified with vitamin D and calcium, Vitamin D helps regulate the amount of calcium and phosphate in the body. These nutrients are needed to keep bones, teeth and muscles healthy. A lack of vitamin D can lead to bone deformities such as rickets in children, and bone pain caused by a condition called osteomalacia in adults.

Side Effects of Indomie Instant Noodles

Increases the Risk Of Heart Disease, Diabetes And Stroke.

Women who consume instant noodles twice per week or more are prone to suffer from metabolic syndrome, a condition that increases your risk of heart disease, diabetes and stroke. A 2014 study looked at the diets of 10,711 adults. It found that eating instant noodles at least twice per week increased the risk of metabolic syndrome in women. Another study looked at vitamin D status and its relation to dietary and lifestyle factors in 3,450 young adults. Intake of instant noodles was associated with decreased levels of vitamin D. It was also associated with obesity, a sedentary lifestyle and intake of sugar-sweetened beverages.

Noodles have MSG (monosodium glutamate) which leads to increased blood pressure, weight gain, nausea and headaches. A single serving of instant noodles contains 861 mg of sodium. There is evidence showing that high sodium intake may have a negative effect on certain people who are considered salt-sensitive. These individuals may be more susceptible to the effects of sodium and an increase in sodium intake may cause an increase in blood pressure. Those who are black, over 40 years old or have a family history of high blood pressure are the most likely to be affected. One study looked at the effects of reduced salt intake in over 3,153 participants. In participants with high blood pressure, each 1,000-mg reduction in sodium intake led to a 0.94 mmHg reduction in systolic blood pressure.

It Can Negatively Impact Your Weight Loss Efforts

High content of carbohydrate, fat and sodium causes water retention in the body leading to obesity. Sodium binds to water in the body and helps maintain the balance of fluids both inside and outside of cells. If you often eat meals that are high in salt, such as many processed foods, your body may retain water. In fact, these foods are the biggest dietary source of sodium. Obese people are more likely to develop a number of potentially serious health problems, including: Heart disease and strokes. Obesity makes you more likely to have high blood pressure and abnormal cholesterol levels, which are risk factors for heart disease and strokes.

It Can Negatively Affect Kidney, Heart Liver and Damage the Immune System.

Most instant noodles are made with propylene glycol, an anti-freeze ingredient preventing noodle strands from drying by retaining moisture. The body absorbs it and accumulates in kidney, heart and liver damaging immune system. According to a public health statement by ATSDR, Propylene glycol is generally considered to be a safe chemical, and is not routinely tested for, unless specific exposure, such as to a medicine or cosmetic, can be linked with the observed bad symptoms. Since propylene glycol breaks down very quickly in the body, it is very difficult to detect.

Pregnant women should avoid its consumption because it may affect the development of foetus adversely. According to baby center, instant noodle lacks all the important nutrients that you need while pregnant. It is also extremely salty and can possibly lead to hypertension if you eat this day after day. However generally speaking, it’s safe to eat instant noodles in moderation.