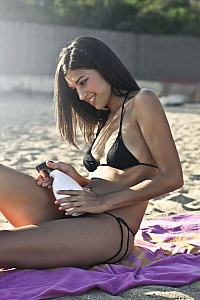 Sunscreen, also known as sunblock, sun cream or suntan lotion, is a lotion, spray, gel or other topical products that absorbs or reflects some of the sun’s ultraviolet radiation and thus helps protect against sunburn. Skin cancer  on the other hand is a condition that arises from the abnormal growth of skin cells due to exposure of the skin to the sun. This common form of cancer can also occur on areas of your skin not ordinarily exposed to sunlight. There are three major types of skin cancer namely:

Globally ,skin cancer are the most common form of cancer accounting for about 40% of cases. The most prevalent  type is non melanoma skin cancer(80% are basal-cell cancers and 20% squamous-cell skin cancers), which occurs in at least 2-3 million people per year. Non melanoma skin cancer rarely result in death. Over the years many primary care providers advise patients to use sunscreen as a means to reduce their risk for skin cancer, especially cutaneous malignant melanoma (CMM). But a study published in the Journal of the  American Board of Family Medicine reported that despite the availability and promotion of sunscreen for decades, the incidence of CMM continues to increase in the U.S. at a rate of 3% per year. There currently is little evidence that sunscreens are protective against CMM. A number of studies suggest that the use of sunscreen does not significantly decrease the risk CMM, and may actually increase the risk of CMM and sunburns.See: Breast Cancer NGO In Nigeria

Does Sunscreen Cause Cancer?

Avobenzone is an oil-soluble ingredient used in sunscreen products to absorb the full spectrum of UVA rays. A new study published in the Chemosphere Journal, reported that avobenzone can break down when exposed to a combination of light and chlorinated water, such as in a swimming pool and it can degrade into some very harmful compounds, some of which are known to cause cancer.

According to Dr. Abigail Waldman, Brigham and Women’s Dermatologist, “Anytime you put on a sunscreen or a lotion, it can react with chlorine and byproducts can form, which are chlorinated byproducts that can potentially be harmful and whether that’s on your skin initially or it’s floating in the pool and you get exposed, those are two main ways of having exposure,”  Another angle many public health specialists are looking at is vitamin D deficiency which currently affects about 90% of the world’s population because  the majority of individuals are not receiving healthy amounts of sun exposure. Deficiency in vitamin D is associated with an elevated risk of nearly all types of cancers such as skin cancer as well as autoimmune and cardiovascular disease. Alternative Cancer Treatment In Nigeria

A double-blind, randomized trial on sunscreen use and duration of sun exposure published by the  Journal of the National Cancer Institute,  reported that In epidemiologic studies, sunscreen use is associated with increased risk of cutaneous melanoma, basal cell skin cancer, and higher numbers of nevi. However, another study on the efficacy of daily sunscreen application and betacarotene supplementation in prevention of basal-cell and squamous-cell carcinomas of the skin published in the Lancet reported that regular daily use of an SPF 15 or higher sunscreen reduces the risk of developing squamous cell carcinoma by about 40 percent. But the study also noted that the use of sunscreens on the skin can prevent sunburn but whether long-term use can prevent skin cancer is not known. Also, there is evidence that oral betacarotene supplementation lowers skin-cancer rates in animals, but there is limited evidence of its effect in human beings. See Dbx 13 Cancer cure

Over ten years ago, the FDA admitted that they “are not aware of data demonstrating that sunscreen use alone helps prevent skin cancer.” The International Agency for Research on Cancer  an intergovernmental agency of the World Health Organization charged with the responsibility of conducting and coordinating research into the causes of cancer recommends that finding shade and using proper clothing articles such as hats should be the first barriers for UV radiation exposure. The agency also emphasized that “sunscreens should NOT be the first choice for skin cancer prevention and should not be used as the sole agent for protection against the sun.” Skin Cancer in Australia Compared To Other Countries

Importance of Caring For The Elderly