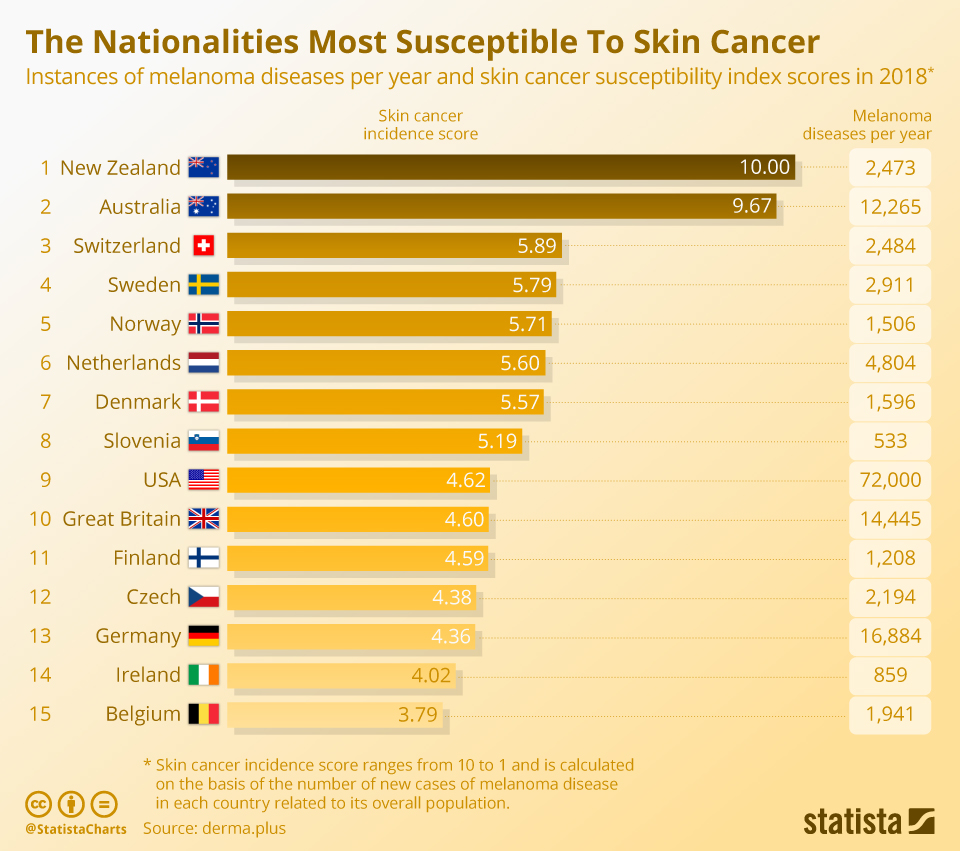 Skin cancer is a condition that arises from the abnormal growth of skin cells due to exposure of the skin to the sun, although many studies reported that sunscreen causes cancer. This common form of cancer can also occur on areas of your skin not ordinarily exposed to sunlight. There are three major types of skin cancer namely:

Why is Skin Cancer More common In Australia and New Zealand?

Australia and New Zealand have the highest rates of melanoma in the world. The three main types of skin cancer have become more common in the last 20 to 40 years, especially in areas that are mostly Caucasian. According to the Cancer Council Of Australia, approximately, two in three Australians will be diagnosed with skin cancer by the time they are 70, with more than 750,000 people treated for one or more non-melanoma skin cancers in Australia each year. Non-melanoma skin cancer is more common in men, with almost double the incidence compared to women.

Australia has a confluence of factors that put the population at prime risk for developing skin cancer the causes of skin cancer in Australia and New Zealand include:

Location of the countries

According to a study Where on Earth has the highest UV, ultraviolet intensities in the New Zealand summer are extreme on the international UV Index scale. The problem with Australia is that the continent receives higher UV radiation levels than Europe. “Being located close to the ozone hole over the Antarctic means that much higher, more severe levels of UV radiation get through to ground level  ( average of about 246 days of sunshine) This means more damaging UV radiation coming through the atmosphere, creating a high UV Index and causing harm to unprotected skin.

Lifestyle of the people

Many in Australia and New Zealand enjoy active, outdoor lifestyles. Outdoor sports and activities such as water sports, gardening, and beach days are quite common which is a healthy lifestyle by all standards. However, spending more time outdoor also exposes the skin to more damaging UV radiation. In addition, it is a common cultural preference for people to tan their skin this encourages harmful tanning practices within the population. See: Alternative Cancer Treatment In Nigeria

The Predominant Type of Skin

Another major reason why skin cancer rates are so high in Australia is the large proportion of fair-skinned people living in the region. The descendants of British and European colonists who came to Australia in the late 18th century are living in an environment to which their skin is not well adapted to. Light skin contains less melanin, our body’s natural protection from UV radiation. This makes them more vulnerable to developing skin cancer. Aboriginal Australians rarely develop skin cancers. See: Breast Cancer NGO In Nigeria

New Zealand -New skin cancers total about 67,000 per year, compared to a total of 16 000 for all other types of cancer. Skin cancer rates in New Zealand are the highest in the world. The incidence of melanoma in New Zealand and Australia is around four times higher than in Canada, the US, and the UK.

United States – More than 1 million cases are diagnosed each year, and according to current estimates, 40 to 50 percent of Americans will have skin cancer at least once by the time they are age 65.

Canada –  Over 80,000 cases of skin cancer are diagnosed in Canada each year, more than 5,000 of which are melanoma, the most deadly form of skin cancer. READ: 10  Photodermatitis Home Remedies You Should Try

What Blood Pressure Pills Cause Cancer?