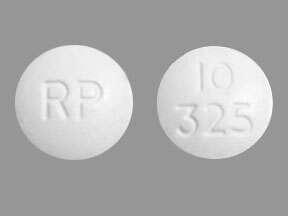 RP 10 325 contains 325 mg of Acetaminophen and 10mg of oxycodone hydrochloride. It is supplied by Rhodes Pharmaceuticals L.P. Acetaminophen a mild painkiller, is a non-opiate, non-salicylate analgesic and antipyretic which occurs as a white, odorless, crystalline powder, possessing a slightly bitter taste while Oxycodone is a strong narcotic pain-reliever and cough suppressant similar to morphine. Oxycodone occurs as a white, odorless, crystalline powder having a saline, bitter taste. It is derived from the opium alkaloid thebaine.

Acetaminophen/oxycodone is used in the treatment of chronic pain; pain and belongs to the drug class narcotic analgesic combinations. Risk cannot be ruled out during pregnancy. Acetaminophen/oxycodone 325 mg / 10 mg is classified as a Schedule 2 controlled substance under the Controlled Substance Act (CSA). The opioid component of this drug attaches to the receptor, which reduces the transmission of pain messages to the brain, reducing pain. Opioids are used to treat moderate to severe pain that is not well managed with other pain medications. Understanding more about RP 10 325 can help people make informed decisions about their pain management, and it may prompt them to seek treatment if they are struggling with substance abuse. SEE: How Long Does RP 10 325 Stay In Your System

Is Percocet the same as oxycodone with acetaminophen?

Oxycodone can be prescribed on its own and is an opioid pain medicine, while Percocet is a combination narcotic with an opioid element that is oxycodone and also acetaminophen, which is the same as Tylenol. Oxycodone acetaminophen is available under the following different brand names: Percocet, Tylox, Primlev, Roxicet, Endocet, and Xartemis XR.

Why is acetaminophen mixed with oxycodone?

What are the side effects of oxycodone acetaminophen?

Can you crush oxycodone acetaminophen?

Yes, all opioid drugs, from heroin to RP 10 325, can lead to overdose if a person takes too much. While the exact doses of each individual opioid may be different, abusing these drugs puts a person at risk of overdose. The main symptom of opioid overdose, including overdose from RP 10 325, is slowed or stopped breathing. The opioid receptors in the brain control pain sensations, link to the reward centers, and manage breathing rates. While taking a large dose of painkillers may make a person feel relaxed, it may suppress breathing so much that the body is starved of oxygen.

Does oxycodone make you pee?

For people with urination problems: If you have trouble urinating due to certain problems, talk with your doctor about whether this drug is safe for you. Oxycodone can make it even harder for you to urinate, or make you unable to urinate. Your doctor may prescribe a lower dosage of this drug.

Yes, all opioid drugs can cause withdrawal symptoms. At high enough doses, even people who take these medicines as prescribed may experience withdrawal symptoms, so doctors typically work with their patients to safely taper off the prescription when it is time to stop taking pain medication or when the individual wants to switch to a different analgesic. However, people who struggle with RP 10 325 addiction typically do not have the direct oversight of their prescribing physician, so if they attempt to stop taking RP 10 325 suddenly or they run out of the drug, they are more likely to experience uncomfortable withdrawal symptoms.

Some products that may interact with this drug include certain pain medications (mixed opioid agonist/antagonists such as pentazocine, nalbuphine, butorphanol), naltrexone. The risk of serious side effects (such as slow/shallow breathing, severe drowsiness/dizziness) may be increased if this medication is taken with other products that may also cause drowsiness or breathing problems. Tell your doctor or pharmacist if you are taking other products such as other opioid pain or cough relievers (such as codeine, hydrocodone), alcohol, marijuana (cannabis), drugs for sleep or anxiety (such as alprazolam, lorazepam, zolpidem), muscle relaxants (such as carisoprodol, cyclobenzaprine), or antihistamines (such as cetirizine)

RP 10 325 abuse can lead to dependence and addiction. As one struggles with an opioid addiction, compulsive misuse of the drugs can cause:

There are two general stages to opioid withdrawal: the early, acute phase and the later phase. Ultimately, detoxing from opioids like RP 10 325 may take up to two weeks.