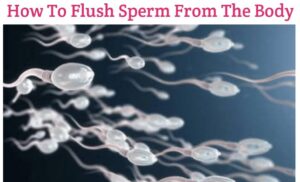 Semen is a combination of fluids that contains vitamins, minerals, and sperm. Sperm is the male reproductive cell, and when it combines with a female’s egg, this may lead to pregnancy. Semen enters the uterus within minutes of ejaculation. Sperm can live inside the vagina for up to 7 days. Once sperm enters the uterus, there is no scientifically proven way of removing it.

Between a few minutes and several hours after intercourse, some fluid may come out of the vagina. Although some of this may contain sperm, it will mainly consist of a mixture of proteins and vitamins from the ejaculation.

How to get sperm out of your body fast

Some of the proposed techniques to flush out sperm from the body naturally include:

Shower or douching: People may shower or douche to try to remove semen from their vagina, but this is unlikely to work, as the water will be unable to reach the semen in the uterus and cannot get sperm out of your body fast.

Bathing: The logic behind having a bath to remove semen is that it will wash the sperm out. However, this will not work, as the water will not reach the uterus.

How to Effectively Prevent Pregnancy

Forget about  Andrews Liver salt, Lime, Ampiclox, Alabukun, Salt and hot water, 7up, Alum, Aloe vera and Neem they are not effective methods of preventing pregnancy. For those who do not wish to get pregnant, there are several ways to prevent pregnancy. People typically use hormonal and nonhormonal birth control methods, but some individuals may also consider natural or surgical methods to prevent pregnancy. Effective methods of preventing pregnancy include;

The Condom: The condom is the only form of contraception that protects against most STIs as well as preventing pregnancy. This method of contraception can be used on demand, is hormone free and can easily be carried with you. And it comes in male and female varieties.

The Oral Contraceptive Pill: It’s the little tablet taken once a day. The oral contraceptive pill is the most commonly reported method of contraception used by Australian women. There are a few different types of pill to choose from, so it’s about finding the one that’s right for you. The combined pill contains estrogen and progestin and mini pill contains only one hormone, a progestin. The pill can have many benefits, however remembering to take it on time is a must.

Intrauterine Device (IUD): This small, T-shaped device is made from made of material containing progesterone hormone or plastic and copper and is fitted inside a woman’s uterus by a trained healthcare provider. It’s a long-acting and reversible method of contraception, which can stay in place for three to 10 years, depending on the type. Some IUDs contain hormones that are gradually released to prevent pregnancy. The IUD can also be an effective emergency contraception if fitted by a healthcare professional within five days (120 hours) of having unprotected sex. IUDs containing coppers are 99% effective and the ones containing hormones are 99.8% effective, so you’re about as protected as you possibly can be by a contraceptive method.

The Contraceptive Implant: In this method, a small, flexible rod is placed under the skin in a woman’s upper arm, releasing a form of the hormone progesterone. The hormone stops the ovary releasing the egg and thickens the cervical mucus making it difficult for sperm to enter the womb. The implant requires a small procedure using local anesthetic to fit and remove the rod and needs to be replaced after three years.

The Contraceptive Injection: The injection contains a synthetic version of the hormone progestogen. It is given into a woman’s buttock or the upper arm, and over the next 12 weeks the hormone is slowly released into your bloodstream.

The Emergency Contraception Pill can be used to prevent pregnancy after sex if contraception wasn’t used, a condom has broken during sex, or a woman has been sexually assaulted. While it is sometimes call the ‘Morning After’ pill, it can actually be effective for up to five days after having unprotected sex. The sooner it is taken, the more effective it is; when taken in the first three days after sex, it prevents about 85% of expected pregnancies. This pill contains special doses of female hormones. Any woman can take the emergency contraception pill, even those who cannot take other oral contraceptive pills. It can be bought over the counter at a pharmacy or chemist without a prescription. Examples include: Postinor 1, Postinor 2, Postpill, and Levon 2

This method consists of a flexible plastic ring constantly releasing hormones that are placed in the vagina by the woman. It stays in place for three weeks, and then you remove it, take a week off then pop another one in. The ring releases the hormones estrogen and progestogen. These are the same hormones used in the combined oral contraceptive pill, but at a lower dose.

A diaphragm is a small, soft silicon dome is placed inside the vagina to stop sperm from entering the uterus. It forms a physical barrier between the man’s sperm and the woman’s egg, like a condom. The diaphragm needs to stay in place for at least six hours after sex. After six – but no longer than 24 hours after sex – it needs to be taken out and cleaned.

How to effectively flush the vagina after sex

According to Medical news daily, the vagina is self-cleaning, and there is no need to clean it immediately after sex. However, the slimy nature of the semen can make many women uncomfortable. If you belong to this class, there are several possible ways to clean the vagina after sex. The most straightforward way is to wash the vaginal area gently with warm water.

The American Sexual Health Association (ASHA) recommends using mild, unscented soap around the vaginal area. It is best to avoid perfumed soaps as these can cause irritation by disturbing the pH level of the vagina.