Alabukun Powder and Abortion: Everything You Should Know 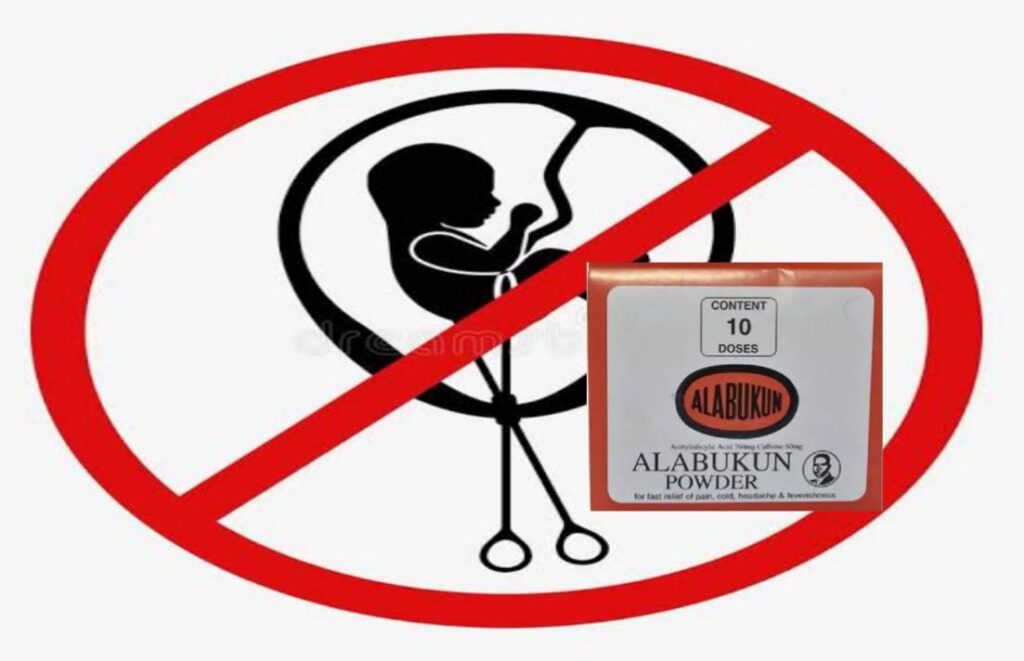 Despite its huge commercial success, Alabukun is one of the most abused medications in Nigeria, the drug is used haphazardly for all manner of conditions including unsafe abortion practice….. but does Alabukun work for abortion?

Unsafe abortion is a neglected public health problem accounting for 13% of maternal death worldwide. In Africa, 99% of abortions are unsafe resulting in one maternal death per 150 cases. Nearly half of pregnancies among adolescent girls in developing countries are unplanned. In Africa, about 46% of these pregnancies end in unsafe abortion. Deaths from abortion account for 10% of maternal deaths in sub-Saharan Africa. In Nigeria, nearly 28% of women were found to have had an unwanted pregnancy. The rate of unplanned pregnancy is especially high among young people. But women can only get a legal abortion if the pregnancy poses a threat to the life of woman or in cases of rape or incest.

Deadly Combination of Alabukun for Abortion

In Nigeria, Alabukun is combined with a large number of other unhealthy concoctions for the purpose of terminating pregnancies. Apart from the fact that these combinations do not work for abortion, they also pose a great danger to the health of the mother and her unborn child.

The unsafe use of medicines comes with huge risks; a study published in the Journal of Biochemistry reported that Alabukun induced marked renal and liver damage characterized by a significant increase in plasma urea, creatinine, and total bilirubin. Although caffeine reduces the tendency to become pregnant, Increased blood pressure from high caffeine intake and the effects of the stimulant on the cardiovascular system can have a devastating outcome for people with weak hearts. When people consume too much caffeine, they can go into what is known as caffeine intoxication, where they become confused and disoriented. ALSO SEE: Dangers of Using 7up with Salt

Limes are very acidic and best enjoyed in moderation. Eating many limes can increase your risk of cavities, as the acid in limes can erode teeth. Although lime juice caused reduction in sperm motility and has also been shown to alter estrus cycle by significantly prolonging the diestrus and estrus phases, thus exhibiting anti-fertility potential. Lime juice can result in vaginal dryness, itching, and burning sensation in the vagina.

Apart from the fact that these combinations do not work for abortion or flushing sperm, an already pregnant woman taking this concoction exposes her unborn child to risks that could have far-reaching consequences on both the mother and the child. Babies exposed to alcohol in the womb can develop fetal alcohol spectrum disorders (FASDs). These disorders include a wide range of physical, behavioral, and learning problems. The most severe type of FASD is fetal alcohol syndrome (FAS). Physical defects may include Distinctive facial features, including small eyes, an exceptionally thin upper lip, a short, upturned nose, and a smooth skin surface between the nose and upper lip. Deformities of joints, limbs, and fingers. Slow physical growth before and after birth.

Abuse of potash such as its combination with Alabukun may lead to its accumulation in the body which could cause severe and irreparable damage to the kidney and disrupt normal body functions which may eventually lead to loss of life. Rural women who use this method have the highest rate of failed attempts at pregnancy termination according to studies, which reflects the fact that this method does not work. It is important to also note that mixing Alabukun with Lipton tea or others does not also work either as an abortion agent or a sperm flushing mixture.

Can Beecham Ampiclox Be Used For Abortion?
Alabukun and Abortion
August 15, 2022 Family & Community HealthPublic HealthComments Off on Alabukun Powder and Abortion: Everything You Should Know