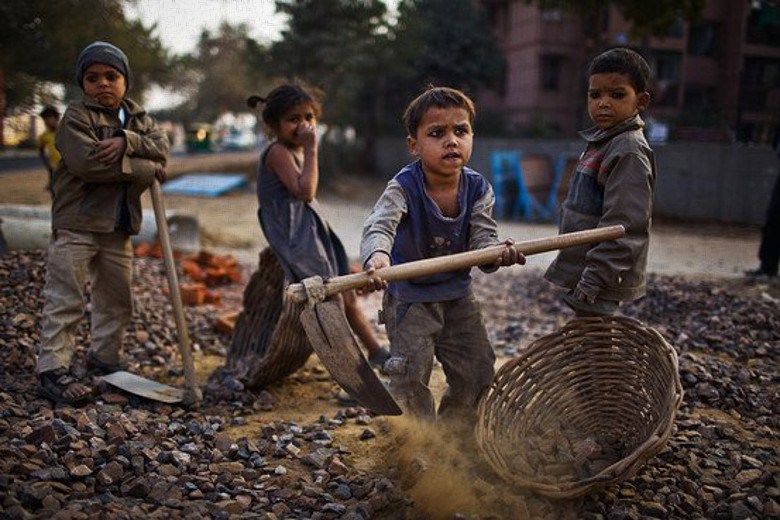 Child poverty refers to the state of children living in poverty and applies to children from poor families or orphans being raised with limited or, in some cases absent, state resources. Children that fail to meet the minimum acceptable standard of the nation where that child lives are said to be poor. In recent years, the world has made remarkable strides in advancing development. Yet, some 736 million people still live in extreme poverty. Children are disproportionately affected. Despite comprising one-third of the global population, they represent half of those struggling to survive on less than $1.90 a day. Children who grow up impoverished often lack the food, sanitation, shelter, health care, and education they need to survive and thrive. Across the world, about one in three children – roughly 663 million – live in households that are multidimensionally poor, meaning they lack necessities as basic as nutrition or clean water.

Child poverty is neither inevitable nor immune to efforts to address it. As many countries have already shown, it can be reduced and even eradicated through continued attention and action. With the Sustainable Development Goals (SDGs), nations agreed for the first time in history to end extreme child poverty. Children living in poverty experience a wide variety of risk factors, ranging from health concerns to increased difficulties at school. Unfortunately, about 15 million children (approximately 21% of all children!) in the United States live in low-income families (incomes below the federal poverty threshold), a measurement that has been shown to underestimate the needs of families.

Research shows on average families require an income of about twice the federal poverty threshold to cover basic expenses. It is no secret that poverty in most parts of the world is an epidemic that needs to be confronted head-on! Besides having difficulties meeting basic, everyday needs, here are just a few of the many other ways poverty harms children of all ages:

The Health Risks of Childhood Poverty

Most are unaware of just how greatly low-income households & poverty can influence child health and cognitive child development. However, poverty does indeed impact growth from early childhood, starting with brain development and other body systems. Poverty itself can negatively affect how the body and mind develop, and can actually alter the fundamental structure of the child’s brain. Children who directly or indirectly experience risk factors associated with poverty have higher odds of experiencing health problems as adults such as heart disease, hypertension, stroke, obesity, certain cancers, and even a shorter life expectancy. Additionally, the mental health of children can be affected as well. A major influence on parents, children, and families is their mental health. Low-income parents and children are more likely to be affected by challenges with mental health, impairing overall academic achievement and the ability of children to succeed in school. The effects of poverty can place these children at a higher risk of involvement with child welfare and juvenile justice agencies.

Growing Up in Impoverished Neighborhoods

Unfortunately, children who are poor are more likely to be raised in impoverished neighborhoods. These types of neighborhoods that have concentrated poverty levels are often associated with difficulties in academics, behavioral and social issues, and worsening health. Additionally, these children are more likely to live in neighborhoods where they are exposed to environmental risk factors. These factors may include pollution, food insecurity, housing instability, lead exposure, violence, and crime.

In regards to violence, even indirect exposure (such as witnessing a violent act or simply knowing of its occurrence) has shown to leave adverse developmental outcomes. Poor children are also disproportionately more likely to attend schools in districts with fewer resources, less funding from local tax, less parental involvement due to longer, low-wage working hours, facilities that are inadequate, and school leadership that has a much higher turnover.

In addition to these macro-level factors that influence neighborhood schools, poverty affects the way children learn as well. For starters, children who directly or indirectly experience risk factors associated with poverty or low parental education have a higher than a 90% chance of having 1 or more problems with speech, learning, and/or emotional development. Also, kids who are experiencing poverty at home often have difficulties focusing at school. You cannot learn well on an empty stomach! There are also often bigger stressors and issues that these young children are worried about after school than completing their homework.

Poverty and Sexual Abuse of Children

The number of prostituted children is rising in many parts of the world, including North America, Africa, and Europe. Exact statistics are difficult to obtain, but it is estimated that there are around 10 million children involved in prostitution worldwide. Research shows an undeniable, complex, and often a cyclical connection between poverty and sexual violence. Children living in poverty and lacking economic power and resources are at greater risk for childhood sexual abuse. For thousands of women, a lack of economic resources has devastating consequences on their abilities to alter their environments or to live in safety, particularly if they have dependent children. Poverty can make the daily lives of women and children more dangerous and make them more dependent on others for survival and, therefore, less able to control their own sexuality, consent to sex, recognize their own victimization, or seek help when victimized; poverty can necessitate high-risk survival activities according to the CDC. For instance, according to the World Health Organization’s World Report on Violence and Health, poverty increases one’s vulnerabilities to sexual exploitation in the workplace, schools, prostitution, sex trafficking, and the drug trade. Individuals who lack sufficient economic resources to meet their basic needs, specifically girls and women, may have to resort to bartering for essential goods with sex.

The Impact of Poverty Within The Family

Because children grow within the context of a family unit, it is important to recognize how poverty affects the household as a whole. Firstly, parents with inadequate income often have difficulties meeting basic economic needs for their families, such as paying for rent, food, utilities, clothing, education, accommodations, health care, transportation, and child care. Living in poverty often means having limited access to healthcare, food, and housing security, a higher risk of school drop-out for children, homeless, unemployment due to lack of education or child care, and, unfortunately, not reaching one’s full potential.

Additionally, stress and alienation have negative impacts connected to having little or no income. For parents, financial uncertainty is their major stressor when they are trying to meet their family’s basic needs. According to the “Stress in America” survey conducted by the American Psychological Association (2017), the proportion of adults who reported that stress impacts their physical and mental health and overall well-being is significantly growing.

Unfortunately, poverty and stress are two markedly consistent factors among perpetrators of child abuse, and they are intrinsically intertwined. While there are multiple causes of child maltreatment (such as mental illness, intimate partner violence, substance abuse, poor parenting skills, unmanaged anger, lack of coping strategies, or other individual issues), the correlation between poverty, stress, abuse, and neglect cannot be ignored. Children that experience these traumatic events (also known as adverse childhood experiences) are more likely to develop a variety of health problems, behavioral issues, or even substance abuse disorders down the road. The negative effects of adverse childhood experiences will only lead to further problems as the child develops from teen to adulthood.

Multiple studies have found environmental complexities and material deprivations to be causes of serious physical abuse. For example, low income, uneducated caregivers, single-parent households, incarcerated parents, teen pregnancy, unemployment, and living in the midst of community violence are macro-level socioeconomic factors that undoubtedly lead to stress in the family.

Additionally, inadequate bonding between the child and their caregivers, intimate partner violence in the home, a physical or mental disability (either the parent or the child), and other health problems (such as being born prematurely), are micro-level issues that place parents under tremendous mental stress, which may translate into abusive behavior. Younger children are more vulnerable to abuse as well, as 46.5% of child abuse fatality victims were younger than one year old, and 34.5% were between the ages of one and three (“Child Welfare Information Gateway,” n.d.).

Furthermore, families living in poverty may not have access to adequate resources, which creates a high risk for neglect, criminal activity, and physical abuse due to additional stress in the home. While it is significant to note that most parents living in poverty or under stressful circumstances will not abuse or neglect their children, kids who grow up in poverty are at a greater risk for maltreatment overall.

The Cycle of Poverty

You may have heard the term, “The Cycle of Poverty.” The cycle of intergenerational poverty refers to the idea that poor parents raise their children in poverty, who are then more likely to become poor parents themselves. It is important to keep in mind that children are more vulnerable to the negative consequences of poverty than adults. While various types of risk factors exist for impoverished households (such as single-parent or single-income households and low parental education), the best protection against child poverty is access to the labor market, quality childcare, and adequate employment and education for parents.

In fact, according to Harvard’s Center on the Developing Child, it is best and more useful to intervene right at the start of development, rather than to try to fix things later. In other words, if we provide the right tools for parents in need, their children will have greater chances to get out of poverty and become successful as adults. Children who live in poverty are affected by one or more risk factors that have been linked to academic failure and poor health, a perfect combination for remaining in the cycle of poverty. According to the National Center for Children in Poverty (2017), between three and 16 percent of children are affected by poverty in combination with another risk factor. An example of a risk factor may include single-parent households or parents with no or low education (1.7 million). These alarming numbers will continue to rise if no adequate intervention is used.

How Environmental Factors Affects The Health Of Children