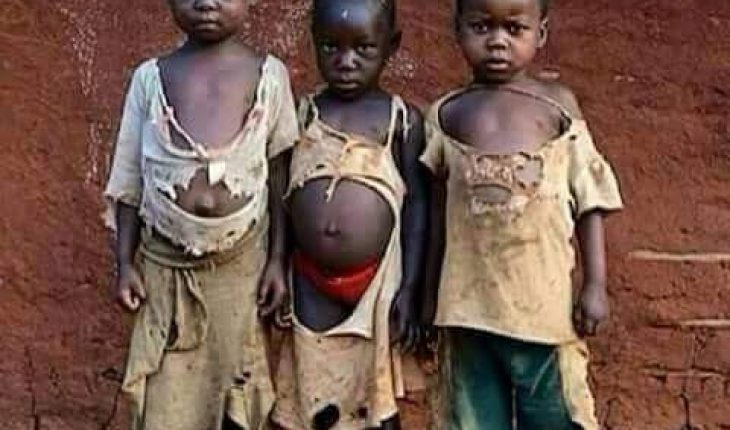 Poverty is a social condition that is characterized by the lack of resources necessary for basic survival or necessary to meet a certain minimum level of living standards expected for the place where one lives. The income level that determines poverty is different from place to place, so social scientists believe that it is best defined by conditions of existence, like lack of access to food, clothing, and shelter.

According to National Bureau of Statistics (NBS) in Africa’s most populated  country, Forty percent of Nigerians live below its poverty line of 137,430 naira ($381.75) a year. This represents 41.5% of its population or 82.9 million people. People in poverty typically experience persistent hunger or starvation, inadequate or absent education and health care, and are usually alienated from mainstream society. Poverty is a consequence of the uneven distribution of material resources and wealth on a global scale and within nations. Sociologists see it as a social condition of societies with unequal and inequitable distribution of income and wealth, and the exploitative effects of global capitalism.

Currently, more than 2 billion people don’t have access to clean water at home, while over 800 million suffer from hunger. You might think that poverty causes hunger and prevents people from accessing clean water (and you would be right!), but hunger and water insecurity are also big reasons why people struggle to escape extreme poverty.

If a person doesn’t get enough food, they simply don’t have the strength and energy needed to work, while lack of access to food and clean water can also lead to preventable illnesses like diarrhea. And when people must travel far distances to clinics or spend what little money remains on medicine, it drains already vulnerable populations of money and assets, and can knock a family from poverty into extreme poverty.Even if clean water sources are available, they’re often located far from poor, rural communities. This means that women and girls collectively spend some 200 million hours every day walking long distances to fetch water. That’s precious time that could be used working, or getting an education to help secure a job later in life.

This might seem a bit like a “no brainer.” Without a job or a way to make money, people will face poverty. But it’s easy to assume that if someone wants a job, they could have one. That just isn’t true, particularly in developing and rural parts of the world. Dwindling access to productive land (often due to conflict, overpopulation, or climate change), and overexploitation of resources like fish or minerals is putting increasing pressure on many traditional livelihoods. In the Democratic Republic of Congo (DRC) for example, most of the population lives in rural communities where natural resources have been plundered over centuries of colonialism — while conflict over land disputes has forced people from the land they relied upon for food and money. Now, more than half of the country lives in extreme poverty. While inconsistent work and low paying jobs can land a family in poverty, absolutely no work means that a family can’t get by without assistance.

Conflict can cause poverty in several ways. Large scale, protracted violence that we see in places like Syria can grind society to a halt, destroy infrastructure, and cause people to flee, forcing families to sell or leave behind all their assets. In Syria, around 70% of the entire population now lives below the poverty line — this in a country where extreme poverty was once very rare. Women often bear the brunt of conflict: during periods of violence, female-headed households become very common. And because women often have difficulty getting well-paying work and are typically excluded from community decision-making, their families are particularly vulnerable.

But even small bouts of violence can have huge impacts on communities that are already struggling. For example, if farmers are worried about their crops being stolen, they won’t invest in planting. Women are particularly vulnerable in these kinds of conflicts, too, as they often become the targets of sexual violence while fetching water or working alone in the fields.

There are many different types of inequality in the world, from economic to social inequalities like gender, caste systems, or tribal affiliations. But no matter the inequality, it generally means the same thing: unequal or no access to the resources needed to keep or lift a family out of poverty.

Sometimes inequalities are obvious, but in other situations, it can be subtle — for example, the voices of certain people or groups might not be heard in community meetings, meaning they don’t get a say in important decisions. Regardless, these inequalities mean that the people affected don’t have the tools they desperately need to get ahead, and for already vulnerable families, this can mean the difference between being poor or living in extreme poverty.

Not every person without an education is living in extreme poverty. But most of the extremely poor children don’t have access to education. And why is that? There’s a lot of barriers stopping children from going to school. Many families can’t afford to send their children to school and need them to work. More still don’t see a benefit in educating girls. Education is often referred to as the great equalizer, and that’s because education can open the door to jobs and other resources and skills that a family needs to not just survive, but thrive. UNESCO estimates that 171 million people could be lifted out of extreme poverty if they left school with basic reading skills. And, with even more education, world poverty could be cut in half.

You might be stunned to learn that the World Bank estimates that climate change has the power to push more than 100 million people into poverty over the next ten years. As it is, climate events like drought, flooding, and severe storms disproportionately impact communities already living in poverty. Why? Because many of the world’s poorest populations rely on farming or hunting and gathering to eat and earn a living. They often have only just enough food and assets to last through the next season, and not enough reserves to fall back on in the event of a poor harvest. So when natural disasters (including the widespread droughts caused by El Niño) leave millions of people without food, it pushes them further into poverty, and can make recovery even more difficult.

Imagine that you have to go to work, or to the store, but there are no roads to get you there. Or heavy rains have flooded your route and made it impassable. What would you do then? A lack of infrastructure — from roads, bridges, and wells to cables for light, cell phones, and internet — can isolate communities living in rural areas. Living “off the grid” means the inability to go to school, work, or market to buy and sell goods. Traveling farther distances to access basic services not only takes time, it costs money, keeping families in poverty. Isolation limits opportunity, and without opportunity, many find it difficult, if not impossible, to escape extreme poverty.

Many people living in the United States are familiar with social welfare programs that people can access if they need healthcare or food assistance. But not every government can provide this type of help to its citizens — and without that safety net, there’s nothing to stop vulnerable families from backsliding further into extreme poverty if something goes wrong. Ineffective governments also contribute to several of the other causes of extreme poverty mentioned above, as they are unable to provide necessary infrastructure or ensure the safety and security of their citizens in the event of conflict.

People living in poverty don’t have the means to weather the storms of life. So when there is a drought, or conflict, or illness, there is little money saved or assets on hand to help. In Ethiopia for example, repeated cycles of drought have caused harvest after harvest to fail, causing a widespread hunger crisis. To cope, families will pull their children from school, and sell off everything they own to eat. That can help a family make it through one bad season, but not another. For communities constantly facing climate extremes or prolonged conflict, the repeated shocks can send a family reeling into extreme poverty and prevent them from ever recovering.

Corruption is the single most important cause of poverty in African countries including Nigeria. Corruption often accompanies centralization of power, when leaders are not accountable to those they serve. Most directly, corruption inhibits development when leaders help themselves to money that would otherwise be used for development projects. In other cases, leaders reward political support by providing services to their followers. According to Transparency International, Nigeria is ranked the 144th least corrupt nation in the world, out of 180 countries. This portrays the high level of corruption in the country. Corruption undermines the rule of law and threatens socio-economic development. It as well increases poverty by retarding investment and employment opportunities. It reduces revenue from tax as well as the effectiveness of government intervention programs. Corruption diverts government spending away from socially valuable goods such as education and health.   SEE: Effects Of Poverty

What Can You Do With A Public Health Major