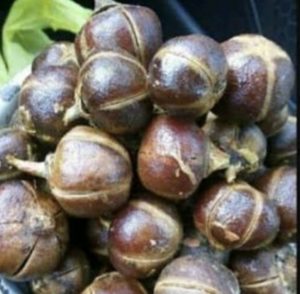 Azanza garckeana is a semi-deciduous tree, which can grow up to 10 m tall, with a roundish crown. The young branches have soft shaggy hairs, becoming smoother and grey to brown, as they age; the older branches and stems have rough, longitudinally cracked bark.

The English name of goron Tula is snot apple or African chewing gum. The high nutritional value of this plant goron tula makes it an important plant traditionally used in herbal medicine to treat or manage around 22 human diseases, ailments and health conditions in tropical Africa especially Nigeria. Biological researchers state that only about 1 percent of the plants in the rain forest have been studied for their medicinal properties.

Goron tula is used for a variety of medicinal and sex enhancing properties this included:

Diabetes mellitus is a disorder in which the amount of sugar in the blood stream is elevated because the body does not produce insulin or does not use it efficiently. Phytochemical and pharmacological screening of the plant indicates that it posses anti hyperglycemic properties making it a good candidate for blood sugar control.

The global cancer burden is estimated to have risen to 18.1 million new cases and 9.6 million deaths last year. One in 5 men and one in 6 women worldwide develop cancer during their lifetime, and one in 8 men and one in 11 women die from the disease. Antioxidants play important roles in the maintenance of cellular integrity and thus are critical in maintaining the balance of the host immune system. This protect cells from the damage caused by unstable molecules known as free radicals which can result in cancer. Azanza Garckeana is a rich source of antioxidants.

According to the World Health Organization (WHO), Infertility is a disease of the reproductive system defined by the failure to achieve a clinical pregnancy after 12 months or more of regular unprotected sexual intercourse. Overall, some 84% of couples are estimated to conceive naturally within a year of attempting pregnancy, when having frequent sexual intercourse. Some 92% of all couples conceive naturally within a two year period. The remaining 8% are considered infertile. Goron tula is used to treat both male and female infertility because of its ability to enhance lubrication, cleanse the body system and boost immune function.

More than 1 million sexually transmitted infections (STIs) are acquired every day worldwide. Each year, there are an estimated 357 million new infections with 1 of 4 STIs chlamydia, gonorrhoea, syphilis and trichomoniasis. A study which investigated the in vitro antimicrobial activity of fruit pulp extracts of Azanza garckeana reported that fruit extracts of plant show promising in vitro anti-microbial activity. This explains the plant is widely used in tropical Africa for menstruation problems and the prevention of sexually transmitted diseases. The antibacterial, antifungal, and antioxidant properties of the plant confers it with these abilities.

An aphrodisiac is defined as a food or drug that arouses sexual instinct, brings on desire or increases sexual pleasure or performance. Low sex drive impacts both people in a relationship. You may feel anxious because you want to increase your sex drive. But at the same time, you don’t feel the emotions or physical longing. While you care for your partner, you may find yourself unable to fulfill the sexual part of the relationship. Low sex drive can also affect your partner. They may see themselves as undesirable and lacking sexual fulfillment. This can lead to relationship difficulties. Azanza Garckeana  is renowned for its aphrodisiac properties. This libido booster known colloquially as kayan mata helps couples to have an unforgettable sexual pleasure.

Side Effects
Although, this plant has many medicinal uses, like many herbs, it also has some drawbacks. The side effects of Azanza garckeana or goron tula can include:

Excessive consumption of goron tula can predispose you to cancer due to the tannins present. Tannins (commonly referred to as tannic acid) are water-soluble polyphenols that are present in many plant foods. They have been reported to be responsible for decreases in net metabolizable energy, and protein digestibility in experimental animals. In large amounts, tannic acid can cause side effects such as stomach irritation, nausea, vomiting, and liver damage. A study published in Critical reviews in food science and nutrition, showed that regular consumption of herbs with high tannin concentrations seems to be associated with an increased chance of developing nose or throat cancer.

Neurological problems are those disorders that affect the nervous system. The nervous system includes your brain, spinal cord, and nerves. The hydrolysis of cyanogenic glycosides during crushing or processing of the crop leads to the production of cyanide. Exposure to cyanide from unintentional or intentional consumption of cyanogenic glycosides may lead to acute intoxications, characterized by growth retardation and neurological symptoms resulting from tissue damage in the central nervous system (CNS) according to new studies.

Many plant species, both native and naturalized, are currently recognized as being toxic for both animals and humans, and some of them are known to cause their toxic effects due to their alkaloid content. Although the alkaloid content in Azanza garckeana is low, the lowest lethal dose (LDLo) of the substance in plant is unknown. According to a study, major target in animals is the nervous system and many alkaloids structurally resemble neurotransmitters. Because of structural similarity, they can interfere with neurotransmitter receptors. Other organs that can be affected by toxic alkaloids, include: liver, kidneys, heart and circulation, gastrointestinal tract, and reproductive organs.

Foods that are rich in polyphenols as part of a healthy diet is safe for most people. However, people with food allergies or certain medical conditions may need to avoid certain polyphenol-rich foods like goron tula. Even though polyphenols appear to offer many benefits, excessive amounts may have adverse effects. A published research in the American Journal of Clinical Nutrition on the safety of polyphenols reported that a high dose of polyphenol can cause kidney damage, lead to tumor development and altered thyroid hormone production.

Malabsorption is a state arising from abnormality in absorption of food nutrients across the gastrointestinal (GI) tract. Some polyphenol-rich foods like Azanza may also affect the absorption of certain nutrients, as is the case with tea and iron from plant foods. Grapefruit juice is known to interact with multiple medications, and part of this interaction may be related to a type of polyphenol found in grapefruit juice.

Side Effects from Microbial Contamination and Adulteration

According to the World Health Organization, the adulteration of herbal products is a threat to consumer safety. Processing and handling of this fruit are vital if they are to deliver their huge medicinal benefits. The increase in popularity of goron tula fruits and powder has also brought concerns and fears over quality due to fraudulent practitioners. In addition, unwholesome products in the market may be contaminated with excessive or banned pesticides, microbial contaminants, heavy metals, chemical toxins, or adulterated with orthodox drugs. These foreign agents can expose you and your loved one to many side effects depending on the agent implicated. CLICK HERE TO SEE : Kayan Mata: How to Use Goron Tula

Can Goron Tula Cause Miscarriage During Pregnancy?