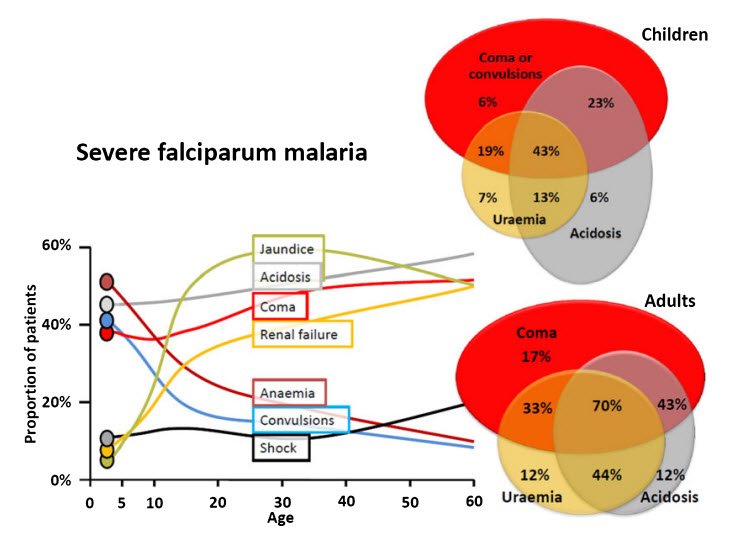 Malaria is a life-threatening disease. It’s typically transmitted through the bite of an infected Anopheles mosquito. Infected mosquitoes carry the Plasmodium parasite. When this mosquito bites you, the parasite is released into your bloodstream. Malaria is typically found in tropical and subtropical climates where the parasites can live. According to the World Health Organization (WHO)Trusted Source latest World malaria report, released in November 2018, there were 219 million cases of malaria in 2017, up from 217 million cases in 2016. The estimated number of malaria deaths stood at 435 000 in 2017, a similar number to the previous year.

The World Health Organization defines Severe malaria as one or more of the following, occurring in the absence of an identified alternative cause, and in the presence of P. falciparum asexual parasitaemia.

A base deficit of >8 meq/l or, if unavailable, plasma bicarbonate of <15 mM or venous plasma lactate >5 mM. Severe acidosis manifests clinically as respiratory distress – rapid, deep and laboured breathing

Hyperparasitaemia is a major indicator of a poor prognosis in children and adults with severe falciparum malaria; however, the relation between parasitaemia and prognosis varies according to the level of malaria transmission.

Radiologically confirmed, or oxygen saturation <92% on room air with a respiratory rate >30/min, often with chest in-drawing and crepitation on auscultation

Including recurrent or prolonged bleeding from nose gums or vein puncture sites; haematemesis or melaena 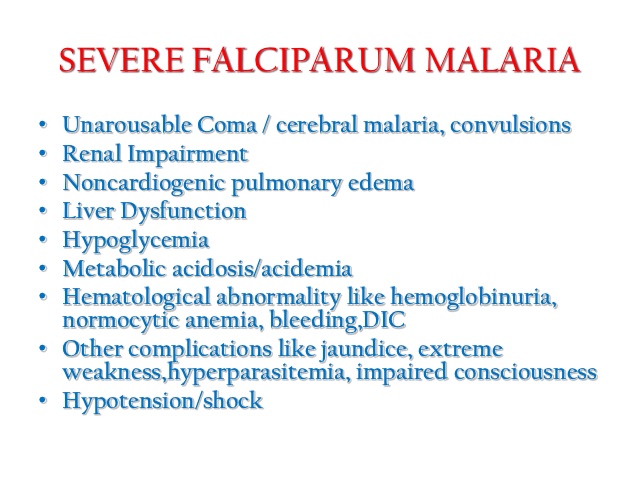 Resistance to antimalarial medicines is a recurring problem. Resistance of P. falciparum malaria parasites to previous generations of medicines, such as chloroquine and sulfadoxine-pyrimethamine (SP), became widespread in the 1950s and 1960s, undermining malaria control efforts and reversing gains in child survival.

Protecting the efficacy of antimalarial medicines is critical to malaria control and elimination. Regular monitoring of drug efficacy is needed to inform treatment policies in malaria-endemic countries, and to ensure early detection of, and response to, drug resistance.

In 2013, WHO launched the Emergency response to artemisinin resistance (ERAR) in the Greater Mekong Subregion (GMS), a high-level plan of attack to contain the spread of drug-resistant parasites and to provide life-saving tools for all populations at risk of malaria. But even as this work was underway, additional pockets of resistance emerged independently in new geographic areas of the subregion. In parallel, there were reports of increased resistance to ACT partner drugs in some settings. A new approach was needed to keep pace with the changing malaria landscape.

At the World Health Assembly in May 2015, WHO launched the Strategy for malaria elimination in the greater Mekong subregion (2015–2030), which was endorsed by all the countries in the sub-region. Urging immediate action, the strategy calls for the elimination of all species of human malaria across the region by 2030, with priority action targeted to areas where multidrug resistant malaria has taken root.

With technical guidance from WHO, all countries in the region have developed national malaria elimination plans. Together with partners, WHO is providing ongoing support for country elimination efforts through the Mekong Malaria Elimination programme, an initiative that evolved from the ERAR.

Surveillance entails tracking the disease and programmatic responses and taking action based on the data received. Currently, many countries with a high burden of malaria have weak surveillance systems and are not in a position to assess disease distribution and trends, making it difficult to optimize responses and respond to outbreaks.

Effective surveillance is required at all points on the path to malaria elimination. Stronger malaria surveillance systems are urgently needed to enable a timely and effective malaria response in endemic regions, prevent outbreaks and resurgences, track progress, and hold governments and the global malaria community accountable.

In March 2018, the WHO released a reference manual on malaria surveillance, monitoring and evaluation. The manual provides information on global surveillance standards and guides countries in their efforts to strengthen surveillance systems.

Malaria Drugs For Babies And Children In Nigeria
WHO definition of  Severe malaria
November 3, 2022 Family & Community HealthPHNLeave a comment