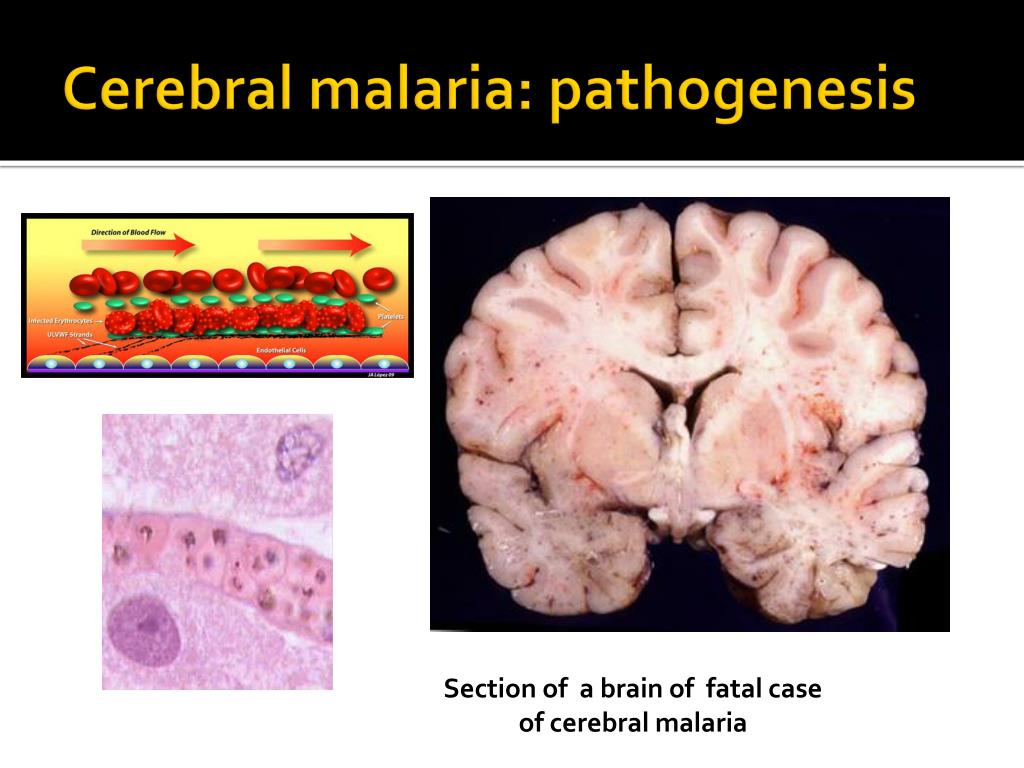 Malaria is a life-threatening disease. It’s typically transmitted through the bite of an infected Anopheles mosquito. Infected mosquitoes carry the Plasmodium parasite. Malaria is typically found in tropical and subtropical climates where the parasites can live. According to the World Health Organization (WHO) latest World malaria report, released in November 2018, there were 219 million cases of malaria in 2017, up from 217 million cases in 2016. The estimated number of malaria deaths stood at 435 000 in 2017, a similar number to the previous year. Cerebral malaria is the most severe neurological complication of infection with Plasmodium falciparum. With over 575,000 cases annually, children in sub-Saharan Africa are the most affected. Surviving patients have an increased risk of neurological and cognitive deficits, behavioral difficulties, and epilepsy making cerebral malaria a leading cause of childhood Neuro-disability in the region.

WHO Definition of Cerebral malaria

The World Health Organization defines Cerebral malaria as malaria that is present in a patient who: Cannot localize a painful stimulus. Has peripheral asexual P falciparum parasitemia. A strict definition of cerebral malaria requires the presence of unarousable coma, exclusion of other encephalopathies, and confirmation of P.falciparum infection. This requires the presence of P. falciparum parasitemia and the patient to be unrousable with a Glasgow Coma Scale score of 9 or less, and other causes (e.g. hypoglycemia, bacterial meningitis, and viral encephalitis) ruled out. To distinguish cerebral malaria from transient postictal coma, unconsciousness should persist for at least 30 min after a convulsion. The deeper the coma, the worse is the prognosis. If necessary, a lumbar puncture should be performed to rule out bacterial meningitis. However, all patients with P. falciparum malaria with neurological manifestations of any degree should be treated as cases of cerebral malaria. 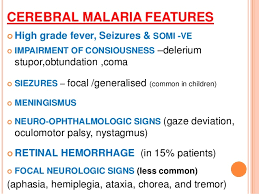 Cerebral malaria is the most important complication of falciparum malaria. However, its pathophysiology is not completely understood. The basic underlying defect seems to be clogging of the cerebral microcirculation by the parasitized red cells. These cells develop knobs on their surface and develop increased cytoadherent properties, as a result of which they tend to adhere to the endothelium of capillaries and venules. This results in sequestration of the parasites in these deeper blood vessels. Also, rosetting of the parasitized and non-parasitized red cells and decreased deformability of the infected red cells further increase the clogging of the microcirculation. It has been observed that the adhesiveness is greater with mature parasites. Obstruction to the cerebral microcirculation results in hypoxia and increased lactate production due to anaerobic glycolysis. The parasitic glycolysis may also contribute to lactate production. In patients with cerebral malaria, C.S.F. lactate levels are high and significantly higher in fatal cases than in survivors. The adherent erythrocytes may also interfere with gas and substrate exchange throughout the brain. However, complete obstruction to blood flow is unlikely, since the survivors rarely have any permanent neurological deficit.

Vascular permeability is found to be mildly increased, however, no definite evidence of cerebral edema has been found on imaging studies. 80%  of children with cerebral malaria have raised ICT, due to increased cerebral blood volume and biomass rather than increased permeability. The mechanism of coma is not clearly known. Increased cerebral anaerobic glycolysis, interference with neurotransmission by sequestered and highly metabolically active parasites have been blamed. Cytokines induce nitric oxide synthesis in leukocytes, smooth muscle cells, microglia and endothelium and NO is a potent inhibitor of neurotransmission.

Causes of neurological manifestations in malaria

High-grade: High-grade fever alone can produce impairment of consciousness, febrile convulsions (in children) and psychosis. These manifestations subside with the decrease in the body temperature. Such cases and patients with unimpaired consciousness after seizures tend to have good prognosis.

Antimalarial drugs: Antimalarial drugs like chloroquine, quinine, mefloquine and halofantrine also can cause altered behaviour, convulsions, hallucinations and even psychosis. Absence of high-grade fever and of falciparum parasitemia may suggest such a possibility.

Hypoglycemia: Hypoglycemia, either due to severe malaria or due to drugs like quinine, may also present with similar manifestations. Hypoglycemia is more common in pregnancy. It may be worthwhile considering this possibility in ALL cases and to administer 25-50% dextrose intravenously.

Hyponatremia: Hyponatremia, most often in the elderly and caused by repeated vomiting, is another important cause for neurological manifestations.

There could be other causes for neurological dysfunction in patients with malaria-like vascular disease, other neurological infections and diseases. Focal neurological deficits, neck rigidity, photophobia, papilloedema and neurological sequelae are very rare in falciparum malaria and such a picture would therefore suggest these other possibilities. SEE: Can I Take Malaria Drugs With Antibiotics?