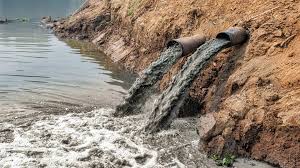 In 2010, the UN General Assembly explicitly recognized the human right to water and sanitation. Everyone has the right to sufficient, continuous, safe, acceptable, physically accessible and affordable water for personal and domestic use. Some 80 percent of the world’s wastewater is dumped largely untreated back into the environment, polluting rivers, lakes, and oceans. This widespread problem of water pollution is jeopardizing our health. Unsafe water kills more people each year than war and all other forms of violence combined. According to the World Health Organization, contaminated drinking water is estimated to cause 485 000 diarrhoeal deaths each year. By 2025, half of the world’s population will be living in water-stressed areas. In least developed countries, 22% of health care facilities have no water service, 21% no sanitation service, and 22% no waste management service.

What Is Water Pollution?

Water pollution is the contamination of water bodies, usually as a result of human activities. Water bodies include for example lakes, rivers, oceans, aquifers and groundwater. Water pollution results when contaminants are introduced into the natural environment. For example, releasing inadequately treated wastewater into natural water bodies can lead to degradation of aquatic ecosystems. In turn, this can lead to public health problems for people living downstream. They may use the same polluted river water for drinking or bathing or irrigation. Water pollution is the leading worldwide cause of death and disease, e.g. due to water-borne diseases.

What Are the Causes of Water Pollution?

There are several causes of water pollution, because water is uniquely vulnerable to pollution. Known as a “universal solvent,” water is able to dissolve more substances than any other liquid on earth. It’s the reason we have Kool-Aid and brilliant blue waterfalls. It’s also why water is so easily polluted. Toxic substances from farms, towns, and factories readily dissolve into and mix with it, causing water pollution.

When rain falls and seeps deep into the earth, filling the cracks, crevices, and porous spaces of an aquifer (basically an underground storehouse of water), it becomes groundwater—one of our least visible but most important natural resources. Nearly 40 percent of Americans rely on groundwater, pumped to the earth’s surface, for drinking water. For some folks in rural areas, it’s their only freshwater source. Groundwater gets polluted when contaminants—from pesticides and fertilizers to waste leached from landfills and septic systems—make their way into an aquifer, rendering it unsafe for human use. Ridding groundwater of contaminants can be difficult to impossible, as well as costly. Once polluted, an aquifer may be unusable for decades, or even thousands of years. Groundwater can also spread contamination far from the original polluting source as it seeps into streams, lakes, and oceans.

Covering about 70 percent of the earth, surface water is what fills our oceans, lakes, rivers, and all those other blue bits on the world map. Surface water from freshwater sources (that is, from sources other than the ocean) accounts for more than 60 percent of the water delivered to American homes. But a significant pool of that water is in peril. According to the most recent surveys on national water quality from the U.S. Environmental Protection Agency, nearly half of our rivers and streams and more than one-third of our lakes are polluted and unfit for swimming, fishing, and drinking. Nutrient pollution, which includes nitrates and phosphates, is the leading type of contamination in these freshwater sources. While plants and animals need these nutrients to grow, they have become a major pollutant due to farm waste and fertilizer runoff. Municipal and industrial waste discharges contribute their fair share of toxins as well. There’s also all the random junk that industry and individuals dump directly into waterways.

In Nigeria Groundwater is widely used in for domestic, agricultural and industrial purposes. Seven years ago there were around 65,000 boreholes or other groundwater points in Nigeria, extracting an estimated total of 6,340,000 m³/day according to the Ministry of Water Resources. However, recent studies have reported high levels of contamination of ground water sources in the country.

Eighty percent of ocean pollution (also called marine pollution) originates on land whether along the coast or far inland. Contaminants such as chemicals, nutrients, and heavy metals are carried from farms, factories, and cities by streams and rivers into our bays and estuaries; from there they travel out to sea. Meanwhile, marine debris particularly plastic is blown in by the wind or washed in via storm drains and sewers. Our seas are also sometimes spoiled by oil spills and leaks big and small and are consistently soaking up carbon pollution from the air. The ocean absorbs as much as a quarter of man-made carbon emissions. According to a study, an estimated 9 to 13 million barrels (1.5 million tons) of oil has spilled into the Niger Delta region of Nigeria over the past 53 years

It goes without saying that water pollution can’t be contained by a line on a map. Transboundary pollution is the result of contaminated water from one country spilling into the waters of another. Contamination can result from a disaster like an oil spill or the slow, downriver creep of industrial, agricultural, or municipal discharge.

The Most Common Types of Water Contamination

Not only is the agricultural sector the biggest consumer of global freshwater resources, with farming and livestock production using about 70 percent of the earth’s surface water supplies, but it’s also a serious water polluter. Around the world, agriculture is the leading cause of water degradation. In the United States, agricultural pollution is the top source of contamination in rivers and streams, the second-biggest source in wetlands, and the third main source in lakes. It’s also a major contributor of contamination to estuaries and groundwater. Every time it rains, fertilizers, pesticides, and animal waste from farms and livestock operations wash nutrients and pathogens such bacteria and viruses—into our waterways. Nutrient pollution, caused by excess nitrogen and phosphorus in water or air, is the number-one threat to water quality worldwide and can cause algal blooms, a toxic soup of blue-green algae that can be harmful to people and wildlife.

Used water is wastewater. It comes from our sinks, showers, and toilets (think sewage) and from commercial, industrial, and agricultural activities (think metals, solvents, and toxic sludge). The term also includes stormwater runoff, which occurs when rainfall carries road salts, oil, grease, chemicals, and debris from impermeable surfaces into our waterways

More than 80 percent of the world’s wastewater flows back into the environment without being treated or reused, according to the United Nations; in some least-developed countries, the figure tops 95 percent. In the United States, wastewater treatment facilities process about 34 billion gallons of wastewater per day. These facilities reduce the amount of pollutants such as pathogens, phosphorus, and nitrogen in sewage, as well as heavy metals and toxic chemicals in industrial waste, before discharging the treated waters back into waterways. That’s when all goes well. But according to EPA estimates, our nation’s aging and easily overwhelmed sewage treatment systems also release more than 850 billion gallons of untreated wastewater each year.

Big spills may dominate headlines, but consumers account for the vast majority of oil pollution in our seas, including oil and gasoline that drips from millions of cars and trucks every day. Moreover, nearly half of the estimated 1 million tons of oil that makes its way into marine environments each year comes not from tanker spills but from land-based sources such as factories, farms, and cities. At sea, tanker spills account for about 10 percent of the oil in waters around the world, while regular operations of the shipping industry through both legal and illegal discharges—contribute about one-third. Oil is also naturally released from under the ocean floor through fractures known as seeps.

Radioactive waste is any pollution that emits radiation beyond what is naturally released by the environment. It’s generated by uranium mining, nuclear power plants, and the production and testing of military weapons, as well as by universities and hospitals that use radioactive materials for research and medicine. Radioactive waste can persist in the environment for thousands of years, making disposal a major challenge. Consider the decommissioned Hanford nuclear weapons production site in Washington, where the cleanup of 56 million gallons of radioactive waste is expected to cost more than $100 billion and last through 2060. Accidentally released or improperly disposed of contaminants threaten groundwater, surface water, and marine resources.

What Are the Effects of Water Pollution?

Nearly one in six deaths, an estimated nine million worldwide, was related to pollution and water pollution is responsible for 1.8 million deaths related to pollution according to a new report published in The Lancet. Contaminated water can also make you ill. Every year, unsafe water sickens about 1 billion people. And low-income communities are disproportionately at risk because their homes are often closest to the most polluting industries.

Contaminated water and poor sanitation are linked to transmission of diseases such as cholera, diarrhoea, dysentery, hepatitis A, typhoid and polio. Absent, inadequate, or inappropriately managed water and sanitation services expose individuals to preventable health risks. This is particularly the case in health care facilities where both patients and staff are placed at additional risk of infection and disease when water, sanitation and hygiene services are lacking. Globally, 15% of patients develop an infection during a hospital stay, with the proportion much greater in low-income countries. Inadequate management of urban, industrial and agricultural wastewater means the drinking-water of hundreds of millions of people is dangerously contaminated or chemically polluted.

Some 842 000 people are estimated to die each year from diarrhoea as a result of unsafe drinking-water, sanitation and hand hygiene. But diarrhoea is largely preventable, and the deaths of 361 000 children aged under 5 each year could be avoided each year if these risk factors were addressed. Where water is not readily available, people may decide handwashing is not a priority, thereby adding to the likelihood of diarrhoea and other diseases. Diarrhoea is the most widely known disease linked to contaminated food and water but there are other hazards. Almost 240 million people are affected by schistosomiasis – an acute and chronic disease caused by parasitic worms contracted through exposure to infested water.

In many parts of the world, insects that live or breed in water carry and transmit diseases such as dengue fever. Some of these insects, known as vectors, breed in clean, rather than dirty water, and household drinking-water containers can serve as breeding grounds. The simple intervention of covering water storage containers can reduce vector breeding and may also have a co-benefit of reducing faecal contamination of water at the household level.

In order to thrive, healthy ecosystems rely on a complex web of animals, plants, bacteria, and fungi—all of which interact, directly or indirectly, with each other. Harm to any of these organisms can create a chain effect, imperiling entire aquatic environments.

When water pollution causes an algal bloom in a lake or marine environment, the proliferation of newly introduced nutrients stimulates plant and algae growth, which in turn reduces oxygen levels in the water. This dearth of oxygen, known as eutrophication, suffocates plants and animals and can create “dead zones,” where waters are essentially devoid of life. In certain cases, these harmful algal blooms can also produce neurotoxins that affect wildlife, from whales to sea turtles.

When water comes from improved and more accessible sources, people spend less time and effort in physically collecting it, meaning they can be productive in other ways. It can also result in greater personal safety by reducing the need to make long or risky journeys to collect water. Better water sources also mean less expenditure on health, as people are less likely to fall ill and incur medical costs, and are better able to remain economically productive. With children particularly at risk from water-related diseases, access to improved sources of water can result in better health and therefore better school attendance, with longer-term consequences for their lives.