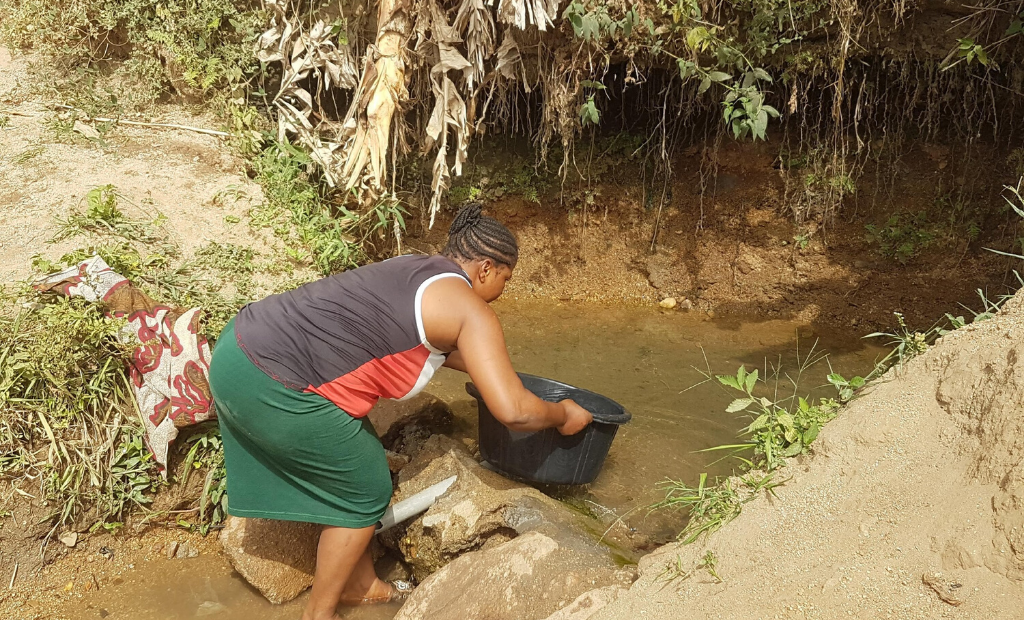 Nigeria has abundant water resources although they are unevenly distributed over the country. The highest annual precipitation of about 3,000 mm occurs in the Niger Delta and mangrove swamp areas of the south-east, where rain falls for more than eight months a year. There is a progressive reduction in precipitation northwards with the most arid north-eastern Sahelian region receiving as little as 500mm precipitation from about 3-4 months of rainfall. Widespread flooding occurs in the southern parts of the country, while the northern parts experience chronic water shortages during the dry season when rain springs, streams, and boreholes dry up.

In spite of the importance of adequate water quality and quantity for human health and survival, public water supply coverage in Nigerian cities appears to be decreasing and deteriorating largely due to pollution.

Almost everything humans do, from growing food to manufacturing products to generating electricity, has the potential to release pollution into the environment. Regulatory agencies charged with protecting the environment identify two main categories of pollution: point-source and nonpoint-source pollution.

Nonpoint-source pollution:  This is the opposite of point-source pollution, with pollutants released in a wide area. As an example, picture a city street during a thunderstorm. Non-point source pollution is comparatively hard to recognize,  and hence methods of control can be complicated and need much effort. The main source of this pollution is the runoff from rains and the direct rainfall through a polluted atmosphere.  One of the most important nonpoint source pollutants is related to agriculture runoff like fertilizers and pesticides which flow into the water and stormwater drainage.

The sewage and wastewater that is produced in each household are treated chemically and released into the sea along with fresh water. The sewage water carries pathogens, a typical water pollutant, other harmful bacteria, and chemicals that can cause serious health problems and thereby diseases. Microorganisms in water are known to cause some very deadly diseases and become the breeding grounds for creatures that act as carriers. These carriers inflict these diseases onto an individual via various forms of contact. A typical example would be Malaria.

Oceans are polluted by oil on a daily basis from oil spills, routine shipping, run-offs, and dumping. Oil spills cause a very localized problem but can be catastrophic to local marine wildlife such as fish, birds, and sea otters. Oil cannot dissolve in water and forms a thick sludge in the water. These substances can be classified as point source pollution, and are almost the highest-ranked contaminants of the water in Nigeria,  mostly in the Niger  Delta region along the coast of  Nigeria.  Positively,  “Nigeria’s economy heavily depends on the oil and gas sector, which in 2008 contributes 97.5 percent of export revenues,   81   percent of government revenues according to the World Bank.    This huge prosperity can have a significant impact on water pollution,  especially,  oil mining operations and activities associated with shipping and drilling in the seabed as well as oil spillage in the water.  Water polluted by oil spills has numerous effects on marine mammals and fish species.

Nutrient   Pollution is a major widespread ecological problem in Nigeria as well as the entire universe. Numerous point and nonpoint pollution sources, involving waste disposal, atmospheric nitrogen oxides, chemical fertilizers used in agriculture, and fossil fuel use,   contain   Nutrients.   Nitrogen and phosphorus are the major nutrient elements to cultivate aquatic plants. However, the overgrowth of these organisms, a consequence of the increment of nutrients, is destructive to water. This is called  “Eutrophication”, which means well-nourished water by nutrients. The eutrophication drive towards a rapid overgrowth of aquatic plants – especially the phytoplankton plants which grow on the surface of the water –  which affects the water sanitation, hinders the food chain cycle which adversely affects the fish population and health, increases the turbidity of the water, and prevent the necessary solar transmission for emergent vegetation growth. Similarly,  when the aquatic plants – namely the benthic plants die and settle in the bottom, the dissolved oxygen is reduced while it is used by them for decomposing,  therefore,  the water quality is inappropriate due to less dissolved oxygen.

Industries discharge chemical wastes comprising substances called effluents in rivers, lakes, streams, etc. Factories sometimes turn waterways into open sewers by dumping oil, toxic chemicals, and other harmful liquids called effluents into them. Water can simply host chemical substances due to its particular physical and chemical properties. Chemical and industrial disposals are frequent pollutants of the water as they have the ability to dissolve in the water molecules. Nevertheless, chemical pollutants either as solutions in the atmosphere or as a direct discharge from factories have a few broad groups discussed below according to their effects.    An obvious example is the disposal of industrial waste into the lagoon from the Lagos metropolis which adversely affected the aquatic life and the aesthetic view of the metropolis. Hence, bluish-green is the current colour of the affected water,  their potential hydrogen  (PH)  level is high,  and the meant rivers have non-preferable sodium and lead components.

Agriculture, which accounts for 70 percent of water abstractions worldwide, plays a major role in water pollution. Farms discharge large quantities of agrochemicals, organic matter, drug residues, sediments, and saline drainage into water bodies. Pesticides are widely used in Nigeria. Pesticides reach and contaminate both surface water and groundwater via runoff – with rain or irrigation water – from adjacent farmlands,  roadsides, or countryside lawns.  Usually,  pesticides are toxic chemicals that are dangerous if contained in the ingested food.  An analytical research study conducted at Ogba, Ikoro, and Ovia rivers in   Edo   State concluded that certain degrees of pollution of fish and water are recorded in the samples taken.  Human health is endangered by the rapid rising of contamination. Pesticides have many effects on human health like destroying the nerve system, liver rotting, chronic diseases, etc.

Water pollution problems caused by mining include acid mine drainage, metal contamination, and increased sediment levels in streams. Sources can include active or abandoned surface and underground mines, processing plants, waste-disposal areas, haulage roads, or tailings ponds. Despite the fact that mining for minerals in Nigeria is still in the development stage as a national industry,  there are many small-scale, mostly illegal, businesses that practice mining actions in some country states like Mabu, Kebbi, and Mambilla  Plateau.  Water pollution from mines is carried by rainwater and other possible means to the fresh surface and groundwater. The contaminated water causes skin blisters and sores. Furthermore,  there are some water bodies near mining practices that are entirely devoid of life. In addition to inclined acidity, the water can be polluted with heavy metals such as cadmium. These heavy metals can be leached into waterways via rainwater. Arsenic leach heaps, in gold mining, may seep out arsenic into groundwater or surface water. See:  Causes Of Water Shortages In Nigeria

Which Type Of Pollution Includes CFCs And Smog?
Causes Of Water Pollution In Nigeria
June 15, 2020 Sanitation & HygienePublic HealthLeave a comment