What Does AMP Mean On A Drug Test?

Drug use can impair a person’s judgment and increase safety risks. This is especially true in certain industries, such as construction, in which using drugs or alcohol at work could cause an injury or even a fatality. As employee drug abuse causes as much as 50% of all on-the-job accidents (source), this is not a matter to be taken lightly. Plus, drug testing can improve the quality of life of employees and their families.

Urine testing is the most popular type of test because it is simple, non-invasive, and highly accurate. A component of marijuana called THC can be detected in the urine. Anabolic steroids can also be detected through urine testing. The ability of the test to detect these substances depends on how much was used and for how long.

Urine drug testing is widely used for testing for opioids and illicit drugs. In the majority of situations, a screening test is used that utilizes an immunoassay, which detects the parent drug and/or metabolite. It usually tests for marijuana, cocaine, opiates, PCP, and amphetamines.

Typically, the screening immunoassay detects the amount of drug present in urine above a predetermined cutoff concentration. Thus, a substance may be present, but if the concentration of that drug is below the cutoff, the result will be negative. For more precise results, the confirmatory urine drug test is done by gas chromatography/mass spectrometry or high-performance liquid chromatography. This test is highly specific and is typically used when testing for the presence of a specific drug is needed.

Typically, drugs cannot be washed out of the hair. This is in contrast to drugs in smoke, which stick to the hair and can be removed with shampoo. However, products used on the hair might, at times, interfere with test accuracy. Hair testing has an advantage because it can detect drug use over longer periods of time (usually around 90 days). This test is available for home use.

To test sweat, a bandage-like patch is placed on the upper arm, midriff, or lower back to collect sweat. Contaminants from the environment cannot penetrate the adhesive barrier from the outside, so the patch can be worn during normal activities. To prevent tampering, the adhesive plastic film cannot be reapplied once removed.

Residue tests are typically found in home testing kits that allow parents to test their children. The kit comes with a pad that picks up drug residue by swiping the pad on the child’s belongings. The pad then is mailed to the manufacturer for testing. The major flaw with this test is that it cannot determine whether any drug residue found was left by the child under suspicion or by someone else.

Blood tests are the most accurate test but are not used routinely in the workplace or school.

A saliva test is a way to detect if someone has been using drugs within the past few days. This type of test can detect many illegal substances, such as heroin and cocaine. But, it may be less reliable in detecting marijuana.

This involves exhaling into a hand-held machine tests for alcohol consumption. Devices are available for home use. There are also disposable devices. 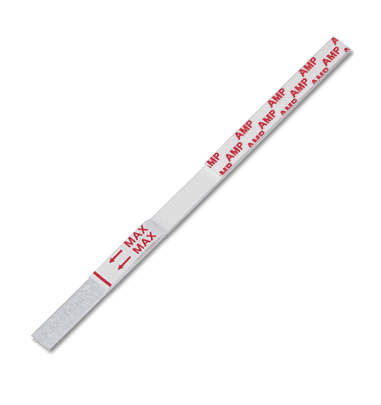 What Does AMP Mean On A Drug Test?

Modern technology enables the detection of a vast range of substances. Employers in industries where abuse of specific substances is a concern (makers and sellers of pharmaceuticals or supplements, for instance) can order custom tests for virtually any substance. AMP on a drug test stands for Amphetamine a central nervous stimulant. Its use results in an increase in certain types of brain activity, resulting in a feeling of higher energy, focus, confidence, and in a dose-dependent manner, can elicit a rewarding euphoria. According to the Center for Substance Abuse Research, amphetamine was first synthesized in Germany in the late 1800s; however, its stimulant properties were not really discovered until about the 1930s, when it began to be used to treat nasal congestion.

Amphetamine abuse has become a major challenge facing people globally. Prescription stimulants like Adderall and Dexedrine, along with illicit amphetamines like methamphetamine and ecstasy, are highly addictive and disruptive when used as recreational drugs. Understanding more about these medications and drugs and how they work in the body creates an ability to recognize the signs of addiction, so individuals can learn how to get help in treating this challenging issue.

People who have been abusing amphetamines often wonder how long these drugs stay in their systems. If you’ve quit taking amphetamines or are considering discontinuing your use, it is important to consult with a doctor to determine the best process for giving up these drugs, as you may experience withdrawal. A doctor can recommend a tapering process or refer you to treatment to help you manage withdrawal.

Once people have completely discontinued using the amphetamines, they normally want to know how long it will take for the drugs to be removed from their systems. Naturally, the process of elimination from the body varies slightly from person to person.

Experts have provided guidelines regarding how long amphetamines stay in the urine, hair and blood. These guidelines are averages and can change from person to person. They are as follows:

The peak effects of amphetamines occur 1 to 3 hours after a person takes them by mouth, and effects last for as long as 7 to 12 hours. According to Johns Hopkins Medicine, the half-life for the popular amphetamine Adderall is 9 hours for the immediate-release version and 10-13 hours for its extended-release version.

Factors that Influence How Long Amphetamines Stay in Your System

Several factors play a role in how long amphetamines linger inside the body. The most influential factors to consider when coming off stimulants are: