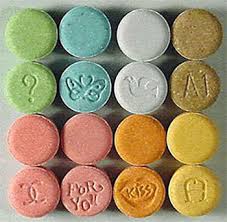 Ecstasy also known as mandy is often called “the love pill” because of its ability to heighten perceptions of color, sound and supposedly amplify sensations when one touches or caresses an individual mostly during sex. Ecstasy drug is a pill containing 3,4-methylenedioxy-methamphetamine (MDMA), a synthetic molecule that alters mood and perception.

Medical research has not targeted a specific link between the concentration of ecstasy in blood and the euphoric effect (feeling “high) induced by ecstasy pills. MDA, the main metabolite in ecstasy, is detected with concentrations varying from 5 to 10%. After you take one dose of 50 mg ecstasy, 0.02-0.08 mg/L MDMA concentration can be detected in the plasma. And if you would increase that dose of ecstasy to 150 mg, the concentration will reach levels of 0.44 mg/L MDMA in plasma. The peak levels of concentrations of MDMA in the first case will be at 1.5 hours later, and up to 4 hours later for the second case. In general, available evidence suggests that ecstasy taken orally reaches its maximal blood concentration in about two hours. As ecstasy is metabolized, it is secreted into the urine and can be present for up to two days in the human body. As a teratogenic substance, the presence of this drug in the body poses a great risk to health and overall well-being.

How long does ecstasy stay in your urine?

As with almost all medications, principal organs such as the liver and kidney play a critical role in helping the body eliminate by-products of a drug and other unwanted substances. When an organ does not function or does not function as it is supposed to, the process of eliminating ecstasy from the body is slower. For example, if a person has kidney disease, the functions of the kidney are not optimal as such, the drug may remain in the system for longer periods of time than normal or even be recirculated. This also applies to the liver which plays a major role in metabolizing substances in the body, the process of getting rid of ecstasy from the body will be slow if the liver is not functioning as it should be. In general, ecstasy will continue to show up for between 3-4 days in urine and 1-2 days in blood post-dose. This is however dependent on several other factors including those discussed in this article. Click On This Link to read: How Long Does Ecstacy High Last

How To Spot A Fake Ecstasy Pill

How Long Does Extacy Stays In Your System
how long does ecstasy stay in your urine
July 24, 2018 Family & Community HealthDr OtorkpaLeave a comment