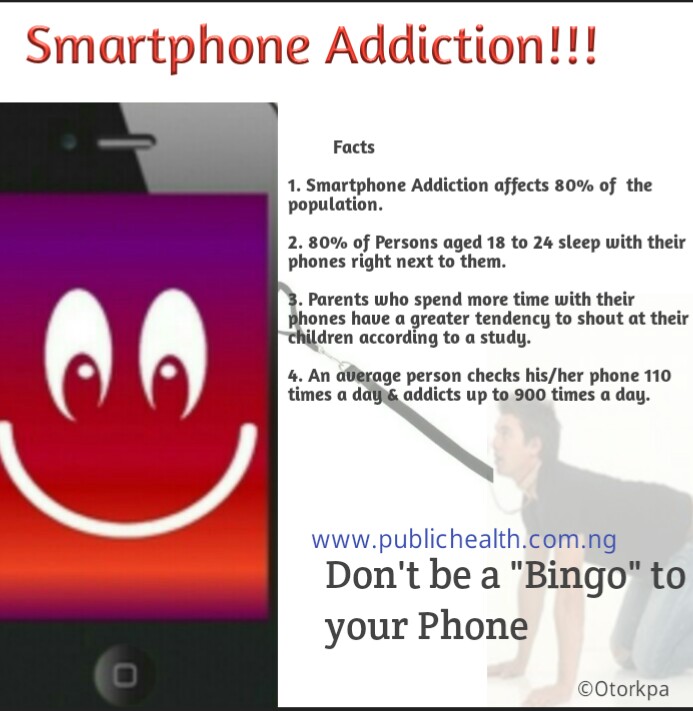 As technology advances so does the complexity and personalization of mobile devices. Phone addiction is a compulsive disorder which involves the non-essential use of phone beyond an initially intended period, this extended use adversely affects other aspects of life such as family, friends and productivity at work.

The excessive use of mobile devices also leads to a mental health disorder otherwise known as Nomophobia which is described as the fear of being without of phone or mobile device. Mobile phones especially smartphones and tablets are a huge source of information and communication capable of enhancing efficiency and productivity. However, the problematic use of these devices has transformed many individuals into walking ghosts owing to their constant swiping, scrolling, chatting and texting.Smartphone addiction has destroyed so many lives, wreaked so many homes and increased the rate of unemployment owing to the constant loss of jobs as a result of addiction and addiction related issues.

The adverse effects of mobile device addiction are:

Most smartphone addicts hardly get enough sleep due to their inability to severe contact with their device and get the required nap. A study published in the Pakistani journal of medical sciences reported that, the sleep quality worsens with increasing phone addiction levels.

A study which dissected the relationship between smart phone and male fertility reported that cell phone radiation may decrease sperm count, sperm motility and viability according to preliminary data.

Depression and anxiety is a recurrent decimal among mobile phone addicts. Researchers from the University of Illinois recently conducted a study involving more than 300 college students and reported that heavier technology use was tied to greater risk for developing anxiety and depression.

Excessive use of mobile devices involves starring at a bright screen and sometimes flash images for a long period of time, this action put severe strain on the eyes and can lead to blurred vision, itchy eyes, headaches and other complications.

Constantly looking down while operating a phone, tablet or other wireless devices over a long period of time can result in the development of a chronic Neck pain known as Text Neck. According to a study conducted by Dr Kenneth K. Hansraj Chief of Spine Surgery at New York Spine Surgery and Rehabilitation Medicine, looking down at your phone puts roughly 27 Kilograms of pressure on the spine as against 5 kilograms while standing. Over time this results in tenderness in the neck, spasm and the bones can even start to change.

Phone addicts are known to operate their devices in virtually every space they find themselves including the toilet. A recent study found feacal matter on 1out of every 6 cell phones analyzed a potentially dangerous situation especially for children who constantly play with this devices.

Phone related accidents leads to the death of millions annually, from air to rail, from marine to the roads. Phones addicts are making nonsense of public safety.A recent study conducted by the National Safety Council found that, 26 per cent (1 in 4) of all car accidents were caused by a driver using a mobile phone.

An investigation into the collision between two trains in California which led to the death of 25 people and injured 102 people revealed that the accident was caused by the excessive use of the mobile phone by the engineer running a red light. Available data from Nigeria shows that, 30% of road traffic accidents are caused by drivers using mobile phones while driving.

Has your phone placed a leash on your neck? Refuse to be the “bingo” take back your life by restricting phone use today

What Are The Side Effects Of Skin of Bleaching Products?