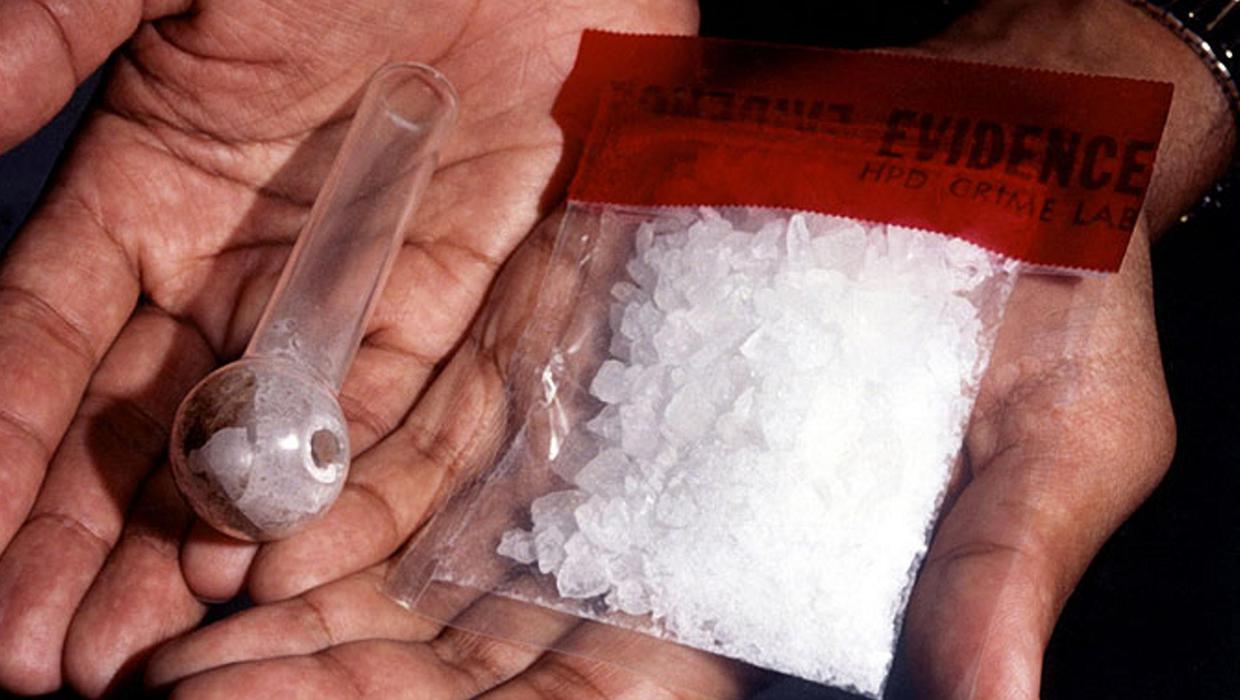 Methamphetamine – meth for short – is a powerful and highly addictive chemical substance used illegally as a stimulant, it directly affects the body’s central nervous system. Street names for methamphetamine include meth, blue, ice, and crystal.

Smoking meth in a small glass pipe is a common practice among addicts. The powder can also be eaten or snorted up the nose. It can also be mixed with liquid and injected into your body with a needle. Smoking meth at first causes a rush of good feelings, but then users feel edgy, overly excited, angry, or afraid. The pleasurable effects of methamphetamine happen when the body releases very high levels of the neurotransmitter dopamine. This is the brain chemical involved in motivation, pleasure, and motor function.

As with many stimulants, methamphetamine is most often abused in a “binge and crash” pattern. Users try to maintain the high by smoking more of the drug before the first dose wears off. The drug acts on parts of the brain involved in reward, and this makes taking another dose tempting.

Some people binge for several days, avoiding food and sleep while continually using the drug until it is finished. However, these high levels of dopamine are also thought to help make the drug more toxic to nerve terminals in the brain.

Methamphetamine is different from and more dangerous than other stimulants because a larger percentage of the drug remains unchanged in the body. This allows the drug to be present in the brain longer, extending the stimulant effects.

How many people smoke methamphetamine?

How many young students use methamphetamine?

How many people have a methamphetamine use disorder?

Meth use can quickly lead to addiction. It causes medical problems. In this article, we shall be looking at the 10 problems caused by smoking meth:

Meth mouth: “Meth mouth” is a term used to describe the visible effects of oral disease in a person who uses methamphetamine because of the rampant tooth decay that often occurs with the drug’s use. People who smoke methamphetamine may have blackened, stained, broken, or rotting teeth both as a result of side effects of the drug itself and related lifestyle factors.

Heart problems and stroke: Smoking methamphetamine increases the risk of heart problems, such as chest pain, abnormal heart rhythm, and high blood pressure. This can lead to a heart attack, acute aortic dissection, or sudden cardiac death, even after using the drug for the first time. These risks are higher when using the drug with alcohol, cocaine, or opioids. There is a higher risk of stroke, possibly due to elevated blood pressure or a faster rate of atherosclerosis.

Tremors and convulsions: A tremor is a rhythmic shaking movement in one or more parts of your body. It is involuntary, meaning that you cannot control it. This shaking happens because of muscle contractions. Smoking crystal meth can send your body into a state of chaos with uncontrollable twitching and violent tremors.

Respiratory problems: Chronic meth smoking can lead to many damaging, long-term health effects, even when people stop taking meth, including labor breathing and other respiratory concerns.

Anorexia – Meth-induced anorexia is characterized by a distorted body image, with an unwarranted fear of being overweight. Symptoms include trying to maintain a below-normal weight through starvation. Female crystal meth smokers have a high incidence of anorexia, as they are so consumed by the drug that they fail to take in the nutrients their body needs to survive.

Crime and Criminality: Smoking meth is associated with significant increases in crime beyond premorbid risk for criminality. Many hardcore crystal meth users have been known to turn to crime (especially robbery) as a means of financing their drug habit.

Relationship Problems: Effects of meth abuse frequently expand beyond the nuclear family. Extended family members can experience feelings of abandonment, anxiety, fear, anger, concern, embarrassment, or guilt. When an individual develops a crystal meth addiction through smoking, the drug becomes the only thing of importance in their lives. That means family and friends are neglected in the name of the drug.

Sexual problems: Many women who smoke methamphetamine report extreme sexual reactions to the drug. Some get super-horny, very wet, and seek immediate sexual satisfaction which increases the risk of HIV infection and other STDs. Long-term use of crystal meth also leads to the inability to achieve an erection or sexual climax.

Mood problems: People who smoke meth experience paranoia, hallucinations, mood disturbances, delusions, or violent behavior (psychotic symptoms can sometimes last for months or years after meth use). Individuals who use crystal meth are also prone to violent mood swings, often moving from intense euphoria into depression or anger without warning.

What Are The Benefits of Quitting Smoking Sexually?
Smoking Meth
January 29, 2022 Family & Community HealthPublic HealthComments Off on 10 Dangers Of Smoking Meth