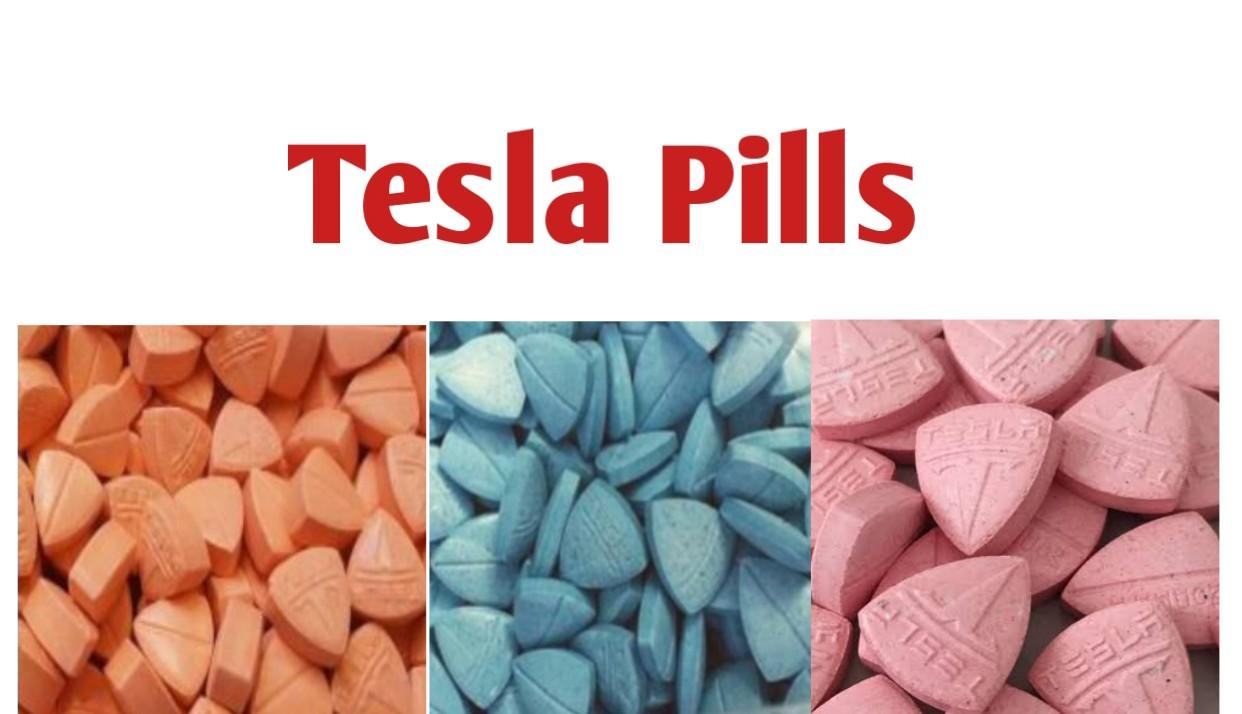 What are Tesla Pills?

Tesla pill is a type of ecstasy containing MDMA (3, 4 methylenedioxymethamphetamine), a synthetic psychoactive drug chemically similar to the stimulant methamphetamine and the hallucinogen mescaline. Tesla pills are shaped with the Logo of Tesla Inc., an American electric vehicle and clean energy company based in Palo Alto, California.

This illegal drug acts as both a stimulant and psychedelic, producing an energizing effect, as well as distortions in time and perception and enhanced enjoyment from tactile experiences. Its primary effects are in the brain on neurons that use the chemical serotonin to communicate with other neurons. The serotonin system plays an important role in regulating mood, aggression, sexual activity, sleep, and sensitivity to pain.

Why is Tesla’s Logo on an illegal Drug?

Tesla logo is also meant to look luxurious and powerful something that its design and color scheme helps with. The makers of this illegal drug mimic this allure to drag users to this product. According to Forbes, early this summer, 20-year-old Jenny, a Los Angeles-based student was getting ready for Coachella. She had the requisite cute hat, tasseled flip flops and of course, two Orange Tesla ecstasy pills secreted away in a hidden pocket. She went for Tesla because she’d heard that they’re potent and make people feel good; plus she’d love to own a Tesla one day.

Types of Tesla Pills In Circulation

There are several types of Tesla branded ecstasy pills in circulation, they include; 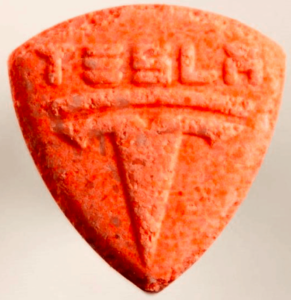 The Orange Tesla Pills: Orange Tesla is an orange Ecstasy pill with a stamped image of the Tesla company logo on it. One of its trademark identifiers is that it glows in the dark. Some of the most potent versions of Orange Tesla contain at least 240 milligrams of methylenedioxymethamphetamine (MDMA). The street price for orange Tesla pills ranges from $10 – $20. Sometimes, drug dealers who are trying to increase their profits from the drug may mix in other ingredients when they make it. These include ephedrine from diet pills, heroin, cocaine, and phencyclidine (PCP). 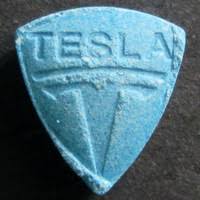 The Blue Tesla Pills: Blue Tesla pill is a blue Ecstasy pill with a stamped image of the Tesla company logo on it. According to reports, the average dose of MDMA in blue triangular “TESLA” tablets that were seized and analyzed was approximately 130mg, which amounts to more than double the dose commonly found. 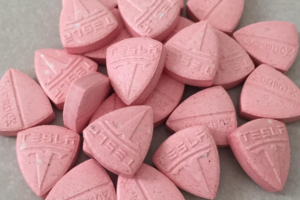 The Pink/Red Tesla Pills: This Tesla pill can be pinkish or reddish in color with a stamped image of the Tesla company logo on it. According to revelations following the seizure of 4 parcels which arrived from Germany and the Netherlands by Chennai Air Customs, these red looking pills embossed with the logo of Tesla Company contain 224 mg of MDMA. 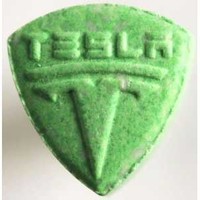 The Green Tesla Pills: Green Tesla is a greenish looking Ecstasy pill with a stamped image of the Tesla company logo on it. Recently, following the arrest of a suspected drug dealer, officers took 10 small green pills into evidence that bear the Tesla logo. The pills and other unknown materials were sent to the coroner’s office to be tested. According to police sources, these super-strength pills, emblazoned with the name of the American car firm, contain up to 300mg of MDMA.

Health Hazards of Tesla Pills Use

For some people, this illicit drug can be addictive. A survey of young adult and adolescent users found that 43% met the accepted diagnostic criteria for dependence, as evidenced by continued use despite knowledge of physical or psychological harm, withdrawal effects, and tolerance (or diminished response), and 34% met the criteria for drug abuse.

Almost 60% of people who use ecstasy report withdrawal symptoms, including:

Research in animals indicates that this drug, also referred to as MDMA or Molly, is neurotoxic; whether or not this is also true in humans is under investigation. Its effect on cognition and memory is a concern. The drug can also be lethal on rare occasions.

Chronic users of ecstasy perform more poorly than nonusers on certain types of cognitive or memory tasks. Some of these effects may be due to the use of other drugs in combination with Tesla Pills, among other factors. Research indicates heavy Tesla Pills use may cause persistent memory problems in humans, although studies are conflicting.

Are There Any Medical Uses for Tesla Pills?

A small study published in The Lancet Psychiatry looked at the use of MDMA in patients suffering from post-traumatic stress disorder (PTSD). Researchers gave three different doses of MDMA to 22 veterans, three firefighters, and one police officer with PTSD. Among the participants, 23% had used ecstasy before. MDMA use was also combined with psychotherapy sessions. A month after the second session, a greater percentage in the high-dose groups no longer met the diagnostic criteria for PTSD, compared with the low-dose group.

After one year, 16 of the 26 participants (62%) no longer suffered from PTSD, but two had received a new diagnosis of PTSD. In addition, 12 patients were also taking additional psychiatric medications.

However, not all experts were convinced. Long-term safety could not be guaranteed with this small group, and there is a risk of addiction and suicide in a population already at risk for these serious outcomes. Researchers note larger phase 3 studies should be completed, but those with PSTD should NOT use MDMA on their own to try to replicate these results.