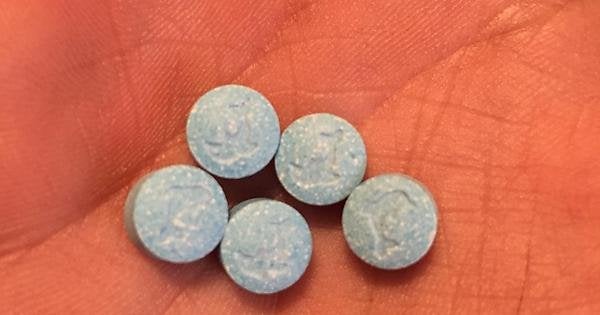 The Blue dolphin pill with a dolphin logo is a type of ecstasy containing the illegal synthetic drug called 3,4-methylenedioxy-methamphetamine (MDMA). It is classified as an empathogen, which means it increases feelings of empathy and compassion towards others. It also acts as a stimulant, since it speeds up the workings of the central nervous system and at high doses can also alter someone’s perception of reality giving it hallucinogenic qualities.

The effects of Blue dolphin pill are usually felt about 20 minutes to an hour after it is taken and last for around 3-4 hours. The comedown (or return to normal as the drug leaves the body) may last one to two days or up to a week.

How Blue dolphin pill is used

MDMA was originally developed in Germany. Today, Blue dolphin pill is generally made in illegal laboratories, which means the person taking it has no idea if the dose will be strong or weak, or even if it will contain any MDMA at all.

It is possible for pills sold as Blue dolphin pills to contain little or no MDMA. They may contain other chemicals (such as amphetamines, PMA, PMMA or ketamine), or ‘fillers’ (such as household products) which may have unexpected or dangerous side effects.

When we are stressed or under threat, the central nervous system prepares us for physical action and our bodies react in response. This may include the release of adrenalin and other stress hormones. Key functions like heart rate and blood pressure may increase, redirecting blood flow into the muscles and away from the gut.

As a nervous system stimulant, Blue dolphin pill works by prompting the brain to initiate this ‘fight or flight’ response and the user feels refreshed by a burst of energy.

Blue dolphin pill can distort your experience of reality by influencing perceptions of sight and sound. Blue dolphin pill is renowned for the feelings of peace and love it invokes. This could be caused by an elevation in brain chemicals, or neurotransmitters (such as serotonin and dopamine).

People with certain conditions – such as epilepsy, high blood pressure, heart disease, diabetes, kidney disease or mood or psychiatric disorders – are at greater risk of harm if they take Blue dolphin pill.

Fake Blue dolphin can also be dangerous because they are mixed with other drugs including alcohol, cocaine, amphetamines, ice and some prescription medications (such as antidepressants).

The effects of Blue dolphin pill can vary from person to person and depend on factors such as:

Generally, effects begin around 20 minutes and will last around 3-4 hours. They may include:

In addition to these symptoms, people who take Blue dolphin pill in large or strong doses, may experience further effects such as:

‘Coming down‘ from Blue dolphin pill

After experiencing a ‘high’, coming down from Blue dolphin pill can be an unpleasant experience. Symptoms may last a few days and include:

If the strength of the dose is high or if Blue dolphin pill is taken in large amounts, it can cause bad reactions or overdose. Signs to watch include:

Blue dolphin pill use can lead to serious harm or death

Blue dolphin pill may also contribute to serious harm, including:

There has been little research on the long-term effects of taking Blue dolphin pill. Studies suggest that problems may include:

It is unknown whether Blue dolphin pill is a drug of addiction. Many users say that it is hard to stop taking the drug and may indicate that it is possible to become psychologically dependent.

Like many other drugs, someone can build up a tolerance to Blue dolphin pill. This means they need to take larger and larger doses to try and achieve the same effect. However, this also tends to increase the intensity of unpleasant side effects.

MP 657 Pills: Uses, How It Works, Dosage, Side Effects