Percocet 30 mg: Facts, Side Effects, Addiction, How to Spot Fakes 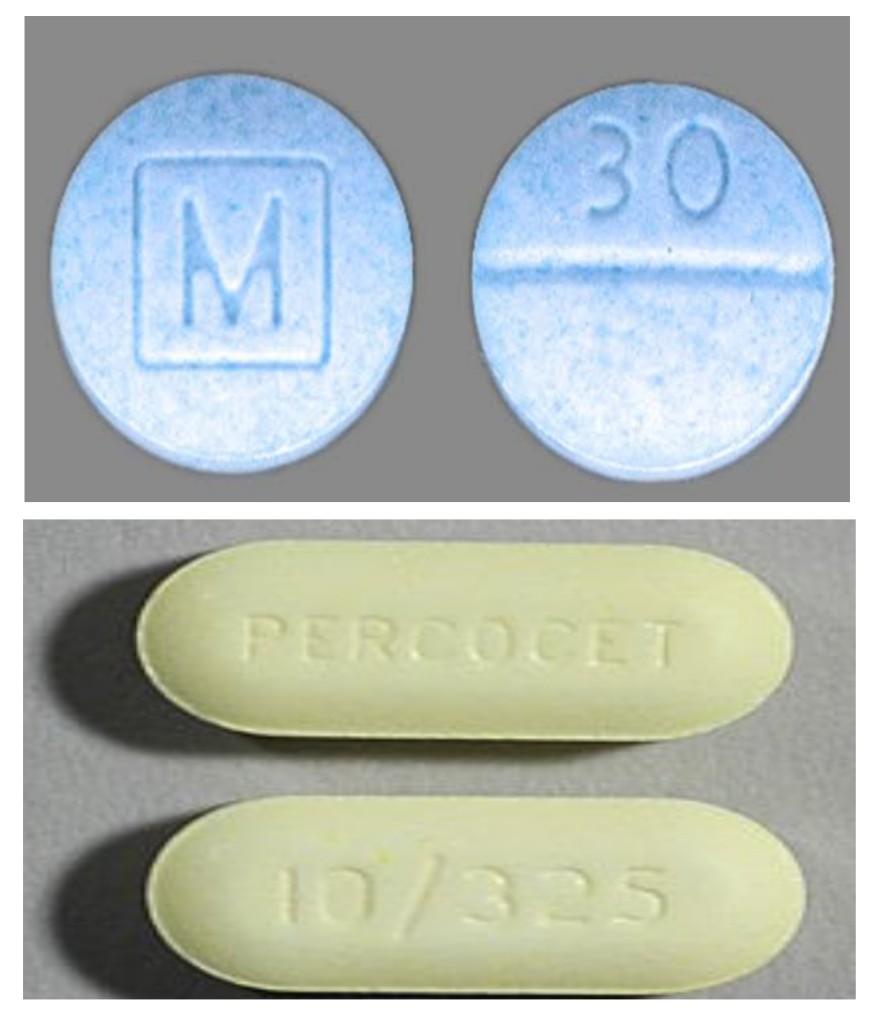 Percocet is the brand name for a painkiller that combines oxycodone and acetaminophen. Oxycodone is a powerful opioid. It’s derived from the same source as morphine and some illegal drugs, including heroin.

Opioids like Percocet activate the brain’s reward center. You can become addicted to the way the drug makes you feel. But over time, the drug will stop working as well as it used to, and you’ll need to take more of the medicine to achieve the same effect.

The blue round pill with the imprint 30 M is a brand of Oxycodone produced by Mallinckrodt Pharmaceuticals. The genuine pill contains 30 mg Oxycodone Hydrochloride AND used in the treatment of chronic pain; pain and belongs to the drug class narcotic analgesics. FDA has not classified the drug for risk during pregnancy. Oxycodone 30 mg is classified as a Schedule 2 controlled substance under the Controlled Substance Act (CSA).

However, according to DEA reports, the most common counterfeit pill found is an illicit substitute of M30 pill. Counterfeit pills are sold on the black market, either on the street by drug dealers or on the dark web. As with other illicit drugs, agents have tied counterfeit pills back to gangs and violent crimes. The prices of counterfeit M30 pills vary, with distributors in Arizona and California, selling a single pill for $4. In Minnesota, the same pill can sell for upwards of $30, or $1 per milligram. Agents have reported seeing prices as high as $100 a pill on Native Reservations.

All of the pills were illicit (fake) pills produced in a clandestine laboratory and not to FDA regulated standards, according to the release.

Most of the pills were stamped with the pill identifier markings “M 30” or “A 215“. Both pills are light blue in color and to the untrained eye look nearly identical to the pharmaceutically-produced products.

These additional chemical compounds are used to either assist in the binding of the substances during the pill pressing process; and/or, to enhance the power and effects of the drug.

In addition to containing fentanyl, the below listed compounds were identified from January 2017 to August 2017 by the Tucson Police Department Crime Lab in seized pills. Additional Chemical Compounds Identified in Tucson Area Fentanyl Seizures:

Does Percocet come in 30 mg?

According to Rx.com, each tablet of Percocet, for oral administration, contains oxycodone hydrochloride and acetaminophen in the following strengths:

Oxycodone, 14-hydroxydihydrocodeinone, is a semisynthetic opioid analgesic which occurs as a white, odorless, crystalline powder having a saline, bitter taste. The molecular formula for oxycodone hydrochloride is C18H21NO4•HCl and the molecular weight 351.82. It is derived from the opium alkaloid thebaine.

Opioids like Percocet can cause serious health complications. The drug can increase a person’s risk for choking. It can also slow a person’s breathing, which may cause them to stop breathing entirely. It’s even possible to fall into a coma or die as a result of an overdose.

A person who is addicted to Percocet may be more likely to use other illegal drugs or prescription medications. Certain combinations of medicines can be lethal. An addiction can affect work performance and personal relationships. People who use and abuse Percocet sometimes engage in risky behaviors. This may lead to motor vehicle accidents or accidents that cause bodily harm.

People who are addicted may also find themselves involved in criminal activity, especially if they decide to steal, forge a prescription, or lie to get more pills.

Medications such as buprenorphine or methadone may be prescribed for Percocet withdrawal. Both have shown great success at treating and easing the symptoms caused by opioid withdrawal.

People who are trying to overcome addiction often go for counseling. Speaking with a professional can help you discover underlying problems that may have contributed to your addiction in the first place.

Whether you’re trying to assist a loved one or searching for a solution yourself, you can find help. Reach out to a family member you trust or a doctor if you’re currently addicted to Percocet. Ask for help locating the resources you need, and work with your support group to find a treatment plan that works for you.

If you’re trying to help a loved one enter treatment, talk with your doctor or an addiction treatment specialist about holding an intervention. Confronting someone about their addiction can be challenging, but ultimately it’s the best thing for both you and your loved one. SEE: How to Spot Fake Percocet