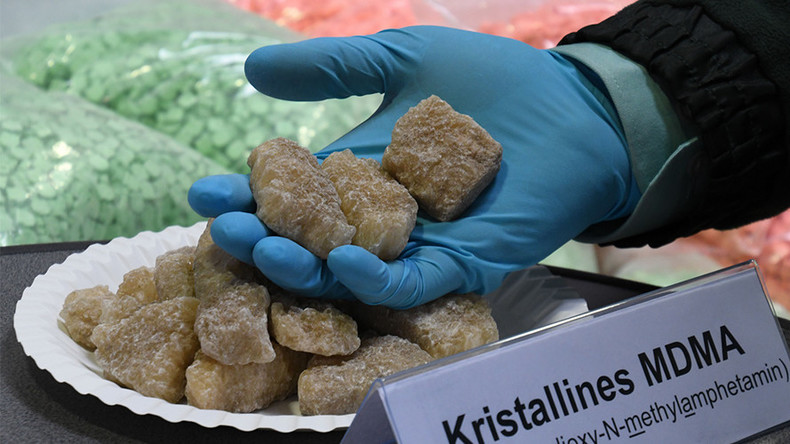 MDMA is the abbreviation of 3,4-methylenedioxy-methamphetamine , a synthetic drug  that alters mood and perception. It achieves this by increasing the activity of three brain chemicals in the following ways:

How do people use MDMA?

People who use MDMA usually take it as a capsule or tablet, though some swallow it in liquid form or snort the powder. The “pure” crystalline powder form of MDMA known in the streets as molly is usually sold in capsules.More recently , researchers are investigating whether controlled doses of MDMA may be useful in psychotherapy as an aid in treating a number of psychiatric conditions such as severe, treatment-resistant posttraumatic stress disorder (PTSD), social anxiety in autistic adults. A new paper suggests past research on MDMA, often overestimated the dangers of the drug because the studies examined heavy users, not average ones.  The idea for the study, published in the Journal of Psychopharmacology, came when lead author Balázs Szigeti of the University of Edinburgh read about a neuroimaging study that claimed MDMA use results in lower levels of serotonin transporter, a protein that’s been linked to anxiety and depression. UK organization based organisation Addaction is leading a new study that will administer MDMA to help people battling alcoholism talk about, and eventually (hopefully) overcome, their addictions. This will be a world-first clinical trial investigating whether or not MDMA can be used as a feasible treatment in such cases. The trial is being led by University of Bristol’s Clinical Research and Imaging Centre. Up to 20 clients are expected to take part in the first phase of the study. 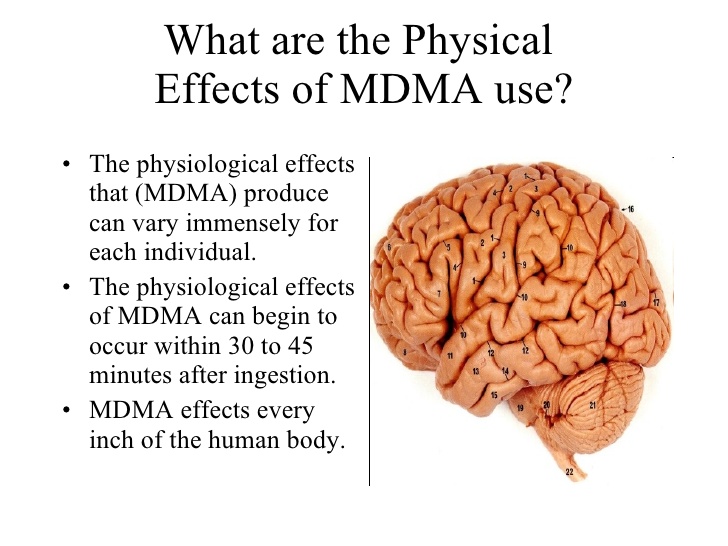 Side Effects of MDMA

MDMA pills side effects include:

How long does MDMA stay in your System?

It usually takes three to four days before MDMA can be completely eliminated from the urine and approximately one to two days before it can be removed from the blood. Also See How Long Does Molly Last

How long Does MDMA High Last

MDMA trip is highly overrated when compared to the accompanying consequences. Noticeable effect sets in about 20-45 minutes after taking the drug, however, in some cases it may take an hour or more.

A user of MDMA for 15 years describes MDMA as a very ‘narrow’ drug, which will heighten feelings and sensations, but only a few at a time. A New York University public-health researcher Joseph J. Palamar, who has investigated the impact of MDMA on sex asserts that MDMA could leave you vulnerable if you get into an unsafe situation. MDMA significantly increases the risk of engaging in risky behavior, thus exposing the user to sexually transmitted diseases such as HIV /AIDS, Genital herpes, Syphilis, Trich and many other forms of VD Despite MDMA being illegal in most, if not all countries, its use remains widespread. In 2014, MDMA was estimated to be one of the most popular recreational drugs used in the world

It is illegal to use MDMA under Controlled Substance Act (CSA).  In 2001, the US Government enacted harsh new sanctions and penalties for those supplying and or using the drug. In

Austria – MDMA is a controlled substance and illegal to buy, sell, or possess in Austria.

Australia–  MDMA is listed as a Schedule 9 Prohibited Substance in Australia and only  available in limited quantities for scientific research purposes only. Any other type of sale, use or manufacture is strictly prohibited by law. Permits for research uses on humans must be approved by a recognized ethics committee on human research. Under the Misuse of Drugs Act 1981 OF western Australia , 4.0g of MDMA is the amount required determining a court of trial, 2.0g is considered a presumption with intent to sell or supply and 28.0g is considered trafficking under Australian law.

Belgium– DMA is illegal to buy, sell, or possess in Belgium.

Denmark – MDMA is a controlled substance and illegal to buy, sell, or possess in in Denmark.

Egypt – MDMA is listed as a Schedule 3 substance in Egypt meaning it requires a prescription or license to legally possess. Egyptian authorities passed a 2015 law allowing anyone in possession of tramadol without a prescription to be imprisoned.

Finland – MDMA is in Finland’s list of controlled substances, in the hard-drug category, meaning that it is illegal to buy, sell, or possess

Germany–  MDMA is classified as a Schedule I in Germany, It is illegal to buy, sell, or possess, except for limited medical or research purposes.

Italy–  MDMA is listed in Tabella I of “Tabelle delle sostanze stupefacenti e psicotrope“, making it illegal to possess, purchase, or sell.

Netherlands –  In Netherlands MDMA is classified as a “hard drug”  making it illegal to sell, manufacture, or possess in large amounts. However, possession of small amounts for personal use is ignored and generally not prosecuted, yet it is still illegal.

New Zealand – MDMA was recategorized from class B2 to the stricter class B1 controlled substance on Aug 2 2005, making it illegal to possess, purchase, or sell. See Misuse of Drugs Act 1975

Norway – In Norway MDMA is listed as Schedule I substance meaning it is  illegal to buy or possess without a license. See Norway Law

Peru– According to Article 2999 in the Peruvian penal code, personal possession of small amounts individual drugs is not a crime. The list of maximum quantities include 2000mg of cocaine, 5000 mg cocaine basic paste, 8000 mg of cannabis, 2000mg of cannabis derivatives, 1000 mg of opium latex or 200mg of opium derivatives, 250mg of MDA or MDMA. See Drugs In Peru: Law of Possession

Portugal– The personal use of MDMA was decriminalized by Law 30/2000 of 2001. Possession of less than 1 g is not regarded as a criminal offense, though the substance is liable to be seized and the possessor can be referred to mandatory treatment. Sale, or possession of quantities greater than the personal possession limit, are criminal offenses punishable by jail time.  See Drug Policy in Portugal. See EMCDDA:Drug policy profiles, Portugal,

Steps on How to Overcome Drug Addiction

What Is Crocodile Drug (Krokodil)?