According to the American Heart Association, replacing bad fats (saturated and trans) with healthier fats (monounsaturated and polyunsaturated) is better for your heart. One way you can do this is by choosing healthier non-tropical vegetable oils for cooking and preparing food. The main purpose of using cooking oil is to quickly transfer heat to the food that’s being cooked. This is why frying is usually quicker than other cooking methods, such as boiling or roasting. Cooking oil has good tolerance against high temperatures, which means it doesn’t boil or break down right away.

In addition, cooking oil can provide additional flavor, depending on what it’s made of, and bring out the fat-soluble nutrients in the other ingredients. When used in baking, it can help with moisture retention, as well as tenderizing and leavening the ingredients.

What is Cooking Oil Smoke point?

The smoke point of oil can be defined as the temperature at which the oil begins to break down and starts to smoke. Despite the many advantages of cooking, one of the main issues with some cooking oil is that when heated, they release trans fat, free radicals, and toxins that can leach into your food and wreak havoc on your health. This explains why you need cooking oil with a high smoke point with a healthy balance of Omega 3 to Omega 6 fatty acids, antioxidants, and vitamins, especially for high-heat cooking.

Omega-3-fatty acids are polyunsaturated fatty acids and are associated with many health benefits. According to a study published in 2001 by the American Medical Association, eating fish high in omega-3-fatty acids has significant health benefits. They promote anti-depressant and anti-inflammatory effects, improve mental skills in children, and reduce the chances of thrombotic infarction, which is a kind of stroke where a blood clot clogs an artery in the brain-destroying brain tissue.

Knowing the smoke point of oils is important because heating oil to the point where the oil begins to smoke produces toxic fumes and harmful free radicals. Frying with some type of oil destroys omega-3-fatty acids quicker and also adds more fat to the food. One study research found that frying tuna destroyed nearly 80% of the omega-3 fatty acids in them. 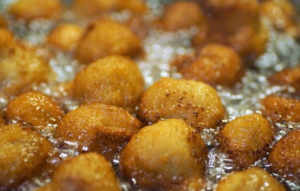 For high-temperature cooking, it is best to select cooking oils with a high smoke point. This will reduce the likelihood of the release of trans fat, free radicals, and toxins that can leach into your food and wreak havoc on your health when heated. 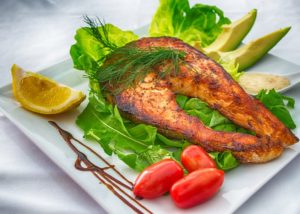 For low-temperature cooking, or adding to dishes and salad dressings, it is best to choose oils with a higher Omega-3 fatty acid because they promote healthy cells and decrease stroke and heart attack risk in addition to other significant health benefits.

Olive oil- Olive oil is a basic ingredient of the heart-healthy Mediterranean diet and is best for drizzling on salads, pasta, and bread. It’s okay to use the oil for a quick sauté or for baking, but it has a low smoke point, making it a bad candidate for deep frying.

Canola oil- According to the U.S. Food and Drug Administration (FDA) 1 1/2 tablespoons of canola oil a day may reduce the risk of coronary heart disease when used instead of saturated fat. Canola oil has a higher smoke point than olive oil and can be used safely for cooking at high temperatures.

Palm oil – Is an edible vegetable oil derived from the mesocarp (reddish pulp) of the fruit of the oil palms, primarily the African oil palm Elaeis guineensis, and to a lesser extent from the American oil palm Elaeis oleifera and the maripa palm Attalea maripa. The health benefits of red palm oil come from its red color as it is very high in the antioxidants beta-carotene and lycopene, as well as tocotrienols, a form of vitamin E that has been shown to be cardioprotective.

Flaxseed oil- Flaxseed oil is a good source of alpha-linolenic acid (ALA), one of three omega-3 fatty acids (olive and canola oils also contain omega-3s). You need dietary omega-3s since your body cannot make them on its own. Omega-3 fatty acids reduce inflammation and thus may help lower the risk of cancer, according to the MD Anderson Cancer Center. Flaxseed oil should not be heated, so it’s best to use it in cold dishes like smoothies or salads.