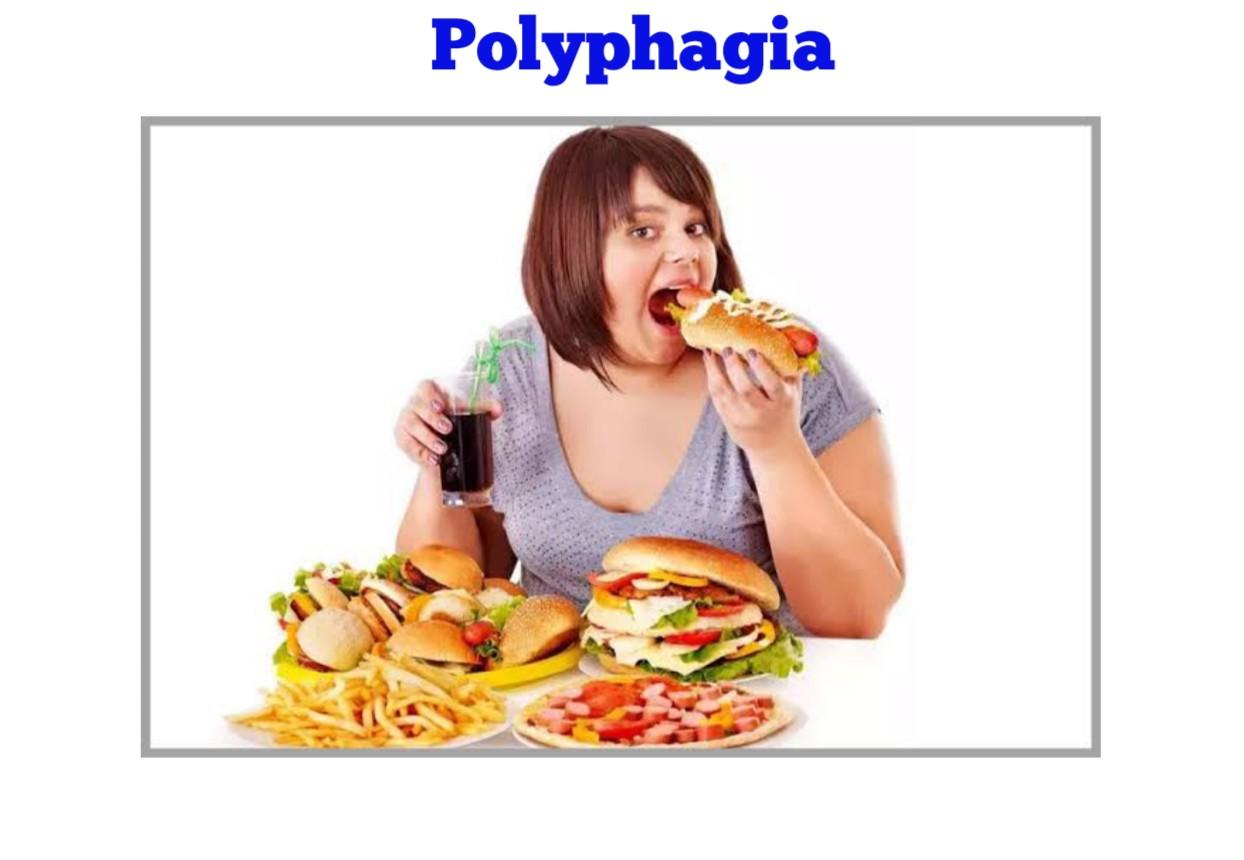 Polyphagia is the medical term used to describe excessive hunger or increased appetite. It is an abnormally strong sensation of hunger or desire to eat often leading to or accompanied by overeating. In contrast to an increase in appetite following exercise, polyphagia does not subside after eating and often leads to rapid intake of excessive quantities of food.

Polyphagia is not a disorder by itself, rather it is a symptom indicating an underlying medical condition. It is frequently a result of abnormal blood glucose levels (both hyperglycemia and hypoglycemia) and is one of the 3 main signs of diabetes that all start with the letter “p”.

While non-diabetics can certainly experience ongoing polyphagia, it is especially common in people with diabetes because both high and low blood sugar levels can have a significant impact on your appetite. An increase in hunger is usually a response to normal things such as intensive exercise or other strenuous activity, but polyphagia can also be the result of more severe issues such as depression or stress.

Polyphagia is probably based on an imbalance of the hypothalamic centers of satiety and diet. In the case of the polyphagia that accompanies diabetes mellitus without ketoacidosis, the decrease in the use of carbohydrates causes a state of hydrocarbon starvation and, by a not entirely clear mechanism, hypothalamic centers are affected, which is why there is an increased desire to eat. In this sense, it is interesting to remember that there are insulin receptors in the ventromedial zone of the hypothalamus and that the presence of this hormone would be necessary for glucose to penetrate the cells of the center of satiety.

Experimental studies suggest that beta-endorphin, an opioid peptide, plays a role in appetite control and that it may be a factor leading to polyphagy, overfeeding, and obesity. Pituitary rats with genetic obesity contain more endorphin. Naloxone, a beta-endorphin antagonist, cancels polyphagia in these animals.

Several physiological conditions, particularly those that affect the endocrine system, can cause polyphagia. Excessive hunger or thirst, excessive cravings for particular types of food, and binge eating may occur with diabetes, pre-menstrual syndrome, pregnancy, hyperthyroidism, Graves’ disease, and some other conditions.

Polyphagia is also a symptom of some psychological conditions and is commonly associated with the eating disorder bulimia. Bulimics may eat huge quantities of food and then force themselves to vomit. Some people suffering from anxiety or depression may also have bouts of polyphagia, though it is not characteristic of either condition.

Is There Treatment for Polyphagia?

Treatment for polyphagia varies depending upon the cause. For some people, excessive hunger or thirst is the first indication they have of an underlying physiological condition, so doctors may run blood and other tests to rule out potential health conditions. Medication can help with diseases that cause polyphagia and may eliminate symptoms entirely.

If a physician cannot locate an underlying physical cause, he or she may refer the patient to a mental health specialist. Treatment for bulimia focuses on stabilizing the person with bulimia, addressing stressors that contribute to the bulimia, and working on his or her body image. Some people with bulimia require inpatient treatment, and may also require medical care if their bulimia has caused health problems. When polyphagia co-occurs with depression, anxiety, or other mental conditions, psychotherapists focus on treating the underlying factors that caused the polyphagia rather than on the symptom itself.

Polyphagia rarely occurs without other symptoms. However, when it does, it may become a compulsion. Certain types of therapy and some medications can be effective at treating compulsive over-eating.

10 Tips On How Prevent Food Cravings

“The first way to prevent food cravings is to avoid big swings in blood sugar, which is part of the major treatment goal for people with diabetes. A Research published in the September 2013 issue of Diabetic Medicine found that cravings decreased with better blood sugar control, whereas a higher A1C was linked to increased cravings for carbohydrate-rich foods.

Sometimes it’s hard to tell whether you’re experiencing a craving or actual hunger, but the timing can give you a clue. Hunger grows over a longer period of time, whereas food cravings emerge suddenly. Hunger is also less likely to go away with distraction. And, , while a food craving is usually for some specific treat, if you’re hungry, you should be interested in eating a wider variety of healthier foods.

If it’s true hunger, it will keep nagging at you, but a craving will pass if you wait it out a little bit. Try going for a walk around the block, calling a friend, listening to music, or reading. Drinking water can also help since some cravings masquerade as thirst, she says.

If you aren’t really hungry and your blood sugar is within a healthy range, your desire to eat could be related to stress, anxiety, or other emotions. Keep a detailed log of what you eat, when you exercise, how worried you are, what your blood sugar levels are, and when your cravings spike to help you pinpoint what’s going on. Once you figure out your pattern, you can “break the chain. If you feel like you have a craving for chocolate every time you have a stressful meeting at work, take a short walk afterward instead.

People who are sleep-deprived tend to have more food cravings than those who are well-rested. Not getting enough sleep may alter your brain function so that you crave a high-calorie food, according to a study published in the August 2013 issue of Nature Communications. If you’re having trouble sleeping, try to improve your bedtime habits by making sure your bedroom is cool, quiet, and dark and by going to sleep and waking up at the same time every day, the National Sleep Foundation recommends.

It’s easier to resist unhealthy foods when they aren’t sitting in your pantry. That’s why you should keep them out of your house and work environment — out of sight, out of mind. This might be most important for people who crave sweets, which can be harder to resist. A published research in the September 2016 issue of Obesity Science & Practice showed that people with a sweet tooth may have a tougher time switching from sweetened drinks to water than do those who don’t have a sweet tooth.

Knowing yourself can help you decide whether to forbid or give in to a craving, says Breeden. If you can be satisfied with a reasonable portion or if you’re at a special celebration, it’s fine to give in occasionally. However, if you’re likely to overdo it, it may be best to avoid a particular food altogether. When you do indulge, remember to account for all carbohydrates, calories, and sodium consumed and factor it into your daily meal plan.

Eating on a regular schedule should help you keep hunger at bay. Make sure each meal and snack has a balance of protein, carbohydrates, fat, and fiber. This will help you consume more nutrients and feel fuller longer. Just be careful if you rely on prepackaged meals and snacks. Even snacks that claim to be healthy can have more carbohydrates — often in the form of sugar — than you need, so be sure to read food labels carefully.

WHO Definition of Hypertension