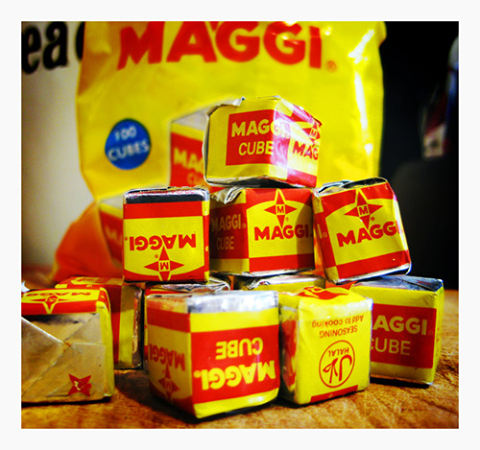 Maggi cube is a popular flavoring enhancer or bouillon, that can be found all over the world. Before Maggi came around, West African cooks used fermented locust beans called iru in Nigeria and dawadawa in Ghana. Maggi is a brand, however, it has become a stand-alone noun in many household. Maggi can come in cubes, powder, sauce, or packets. In Germany, Cameroon, Côte d’Ivoire, Bénin, Gambia, Sénégal, Guinea, Nigeria, Ghana, Burkina Faso, Togo, Sierra Leone, Liberia, Mali, Niger, and Mauritania and parts of the Middle East, Maggi cubes are an integral part of the local cuisine.

In Haiti and throughout Latin America, Maggi products, especially bouillon cubes, are widely sold with some repackaging to reflect local terminology. In the German, Dutch, and Danish languages, lovage has come to be known as Maggi herb (Ger. Maggikraut, Du. maggikruid or maggiplant, Da. maggiurt), because it tastes similar to Maggi sauce, although lovage is not present in the sauce.

What are the ingredients used in making Maggi cubes?

Back in 2009, Nestlé spotted an opportunity, according to Petra Klassen-Wigger, Scientific Advisor at Nestlé’s Nutrition, Health and Wellness department. “Maggi bouillon cubes and tablets were widely consumed across the region, making them an ideal vehicle for iron fortification,” she says.

Nestlé scientists spent two years researching different forms of iron to find the right one. “By making small alterations to other ingredients, we were eventually able to add iron to the cubes without making them more expensive,” Klassen-Wigger explains. Without enough iron, your body can’t produce enough of a substance in red blood cells that enable them to carry oxygen (hemoglobin). As a result, iron deficiency anemia may leave you tired and short of breath. Small changes to food production can have a significant impact. In the case of iron deficiency, treatment can restore health and raise community productivity levels by as much as 20%.

Various studies have proven that garlic can improve heart health and blood pressure. It has also been used for weight loss, as it boosts metabolism and suppresses the appetite. Apparently, garlic also treats vaginal yeast infections, stomach cancers while providing relief from mouth ulcers. Garlic powder is one of the ingredients in Maggi cubes. The tremendous demand of functional food, nutraceuticals, and fortified products has urged food scientists and technologists to come up with novel fortified foods having health-promoting benefits, sensorial acceptability, and better shelf life. Garlic is a promising source of bioactive compounds, especially allicin.

Turmeric, another component of Maggi cube, and its powerful ingredient, curcumin, have a range of health benefits. Antioxidants have the potential to prevent heart disease, eye conditions, and Alzheimer’s. Anti-inflammatory properties can help people with arthritis. Turmeric may even reduce the risk or spread of cancer.

What are the side effects of Maggi cubes?

Trans fats concerns. Partially hydrogenated oil, used in many processed baked goods and snacks and for frying foods, is a major source of trans fat. Trans fats raise your LDL (bad) cholesterol. They also lower your HDL (good) cholesterol. High LDL along with low HDL levels can cause cholesterol to build up in your arteries (blood vessels). This increases your risk for heart disease and stroke.

High Sodium content. Maggi cubes are high in not only sodium. Similar products average about 1,000mg per cube or half cube, excessive sodium is linked to high blood pressure, which can lead to heart disease, stroke, heart failure, and kidney disease. The WHO strongly recommends a reduction in dietary salt intake as one of the top priority actions to tackle the global non-communicable disease crisis and has urged member nations to take action to reduce population-wide dietary salt intake to decrease the number of deaths from hypertension, cardiovascular disease, and stroke.

Monosodium glutamate, or MSG. Monosodium glutamate (MSG) is the main flavor enhancer in Maggi cubes. The Food and Drug Administration (FDA) has classified MSG as a food ingredient that’s “generally recognized as safe,” but its use remains controversial. India’s food regulator had banned Maggi in 2015 after tests showed it contained excessive lead and for alleged mislabeling over flavor enhancer MSG. The product returned to stores after a court lifted the restriction. Nestlé has since then removed the claim “No added MSG.”

The FDA has received many anecdotal reports of adverse reactions to foods containing MSG. These reactions known as MSG symptom complex  include:

However, researchers have found no definitive evidence of a link between MSG and these symptoms. Researchers acknowledge, though, that a small percentage of people may have short-term reactions to MSG. In addition,  MSG has been linked with obesity, metabolic disorders. Results from both animal and human studies have demonstrated that administration of even the lowest dose of MSG has toxic effects.  The only way to prevent a reaction is to avoid foods containing MSG. SEE: Does Ajinomoto Cause Cancer?