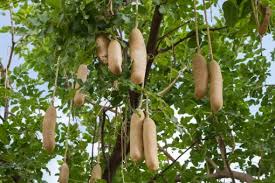 Kigelia oil is extracted from the plant Kigelia pinnata (Bignoniaceae), colloquially called the Sausage Tree, Pandoro or Worsboom, on account of its large fruits. The plant has a variety of medicinal uses throughout Africa where it grows as an endemic species in many areas.

The tree is widely grown as an ornamental tree in tropical regions for its decorative flowers and unusual fruit. In Central Kenya, especially among the Agikuyu and the Akamba, the dried fruits are used to make an alcoholic beverage (muratina in Kikuyu, kaluvu in Kamba), which is a core component in cultural events in Central Kenya. The fruit is harvested then split into two along the grain, then dried in the sun. The dried fruit is then treated with bee pollen and honey. The treated fruit (miatine) is then used in fermentation process in making of sweet beer. 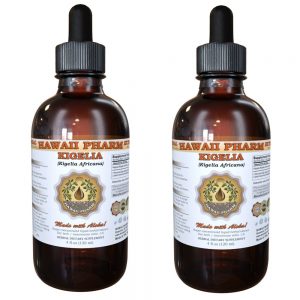 Cancer is a broad term. It describes the disease that results when cellular changes cause the uncontrolled growth and division of cells. A study published in the experimental journal of clinical sciences, reported the presence of Flavonoids in Kigelia pinnata which partly supports the common traditional use of plant in the treatment of cancer. Flavonoids have been shown to exhibit their actions through effects on membrane permeability, and by inhibition of membrane-bound enzymes such as the ATPase and phospholipase and this property may possibly explain the mechanisms of antioxidative action of Kigelia Africana extract particularly the Kigelia oil extract. The extract has been tested against melanoma cells (a tumour of pigmented skin cells, which can develop into malignant melanoma-the potentially fatal form of skin cancer). The extract inhibited the growth of cultured melanoma cells to a significant degree.

Ulcers occur when stomach acid damages the lining of the digestive tract. Common causes include the bacteria H. Pylori and Non steroidal anti inflammatory drugs (NSAID). A study published in the European Journal of Medicinal plants, revealed that potent compounds like alkaloids, phylobatannins, cardiac glycosides, saponins and steroids in Kigelia africana extracts could be employed in the management of ulcer disease caused by non-steroidal anti inflammatory drugs.

A wart is a small growth with a rough texture that can appear anywhere on the body. It can look like a solid blister or a small cauliflower. Warts are caused by viruses in the human papillomavirus (HPV) family. The appearance of a wart depends on its location on the body and the thickness of the skin. The extract of Kigelia Africana have been reported to be actively anti-viral according to a study published in the international Journal of Green Pharmacy. This plant is widely use in the treatment of warts. Kigelia Oil has been found to be effective in reducing and eliminating common flat, plantar warts and skin tags (filiform warts).

It is quite common to hear, questions like: What does kigelia fruit extract do for skin? The answer to this question is quite simple the analgesic, antipyretic, anti-inflammatory, antibacterial, antifungal and antiviral effects of Kigelia fruit extract makes it one of the most traditionally used oil for the treatment of skin conditions. Different parts of Kigelia are used by ethnic groups throughout the world for the treatment of common skin diseases such as fungal infections, psoriasis, eczema, boils, leprosy, syphilis, and  skin cancer. Kigelia Africana extract contain powerful skin-friendly compounds, including flavonoids,  steroids , saponins and fatty acids. Flavanoids are polyphenols known mostly for their potent antioxidant benefits, which are very vital for fighting free radical damage to minimize the signs of aging. Free radicals cause a negative cascade in molecules, triggering wrinkles and other deleterious outcomes (the worst is cancer). Steroids are well known to soothe skin conditions including eczema.  Steroidal saponins are known to create uplifted, taut skin, while fatty acids are popular for moisturizing and plumping the appearance of skin.

Insect bites are puncture wounds or lacerations made by insects. Insects typically inject formic acid. This can lead to blisters, inflammation, redness, swelling, pain, itching, and irritation. Kigelia Oil and extracts have been used for centuries for the treatment of, insect bites, spider bites and “mystery spots”. Pharmacological activities of different extracts as well as isolated compounds from the plant posses analgesic, antipyretic,  anti-inflammatory and tissue regenerating properties  which makes them suitable for the treatment of insect bites.

Treatment of gynecological disorders and Contraception.

Traditional Medicine has significant advantages in treating gynaecological disorders. Kigelia Oil and extracts is widely used by indigenous tribes to treat gynecological disorders. Aqueous preparation of the roots, fruits and flowers are administered orally or as a virginal pessary while the fruits and bark are used to promote breast development in young women or in contrast to reduce swelling and mastitis of the breasts. The plant has also been reported for its anti-implantation activities as well. According to the Indian Journal of Traditional Knowledge, rural women prefer plant medicines rather than modern medicines for abortion, menstrual trouble, conception disorders, sterility, delivery problems.

Men and women have sought aphrodisiacs, agents that arouse or increase sexual response or desire, since the beginning of time. Kigelia Oil and extracts have a strong aphrodisiac effect. They have been reported to have a beneficial effect on sperm parameters resulting in significant increase in the sperm count, testicular weight, body weight, testosterone levels and follicle-stimulating hormone FSH. Testosterone is a sex hormone that plays important roles in the body. In men, it’s thought to regulate sex drive (libido), bone mass, fat distribution, muscle mass and strength, and the production of red blood cells and sperm. But FSH is directly responsible for sperm production in the testicles. Decreased FSH levels together with already low natural levels of testosterone can decrease your sperm count. SEE :Kayan Mata: Types , Uses, Dosage, Side Effects, Warnings

Malaria is a disease caused by a parasite. The parasite is transmitted to humans through the bites of infected mosquitoes. People who have malaria usually feel very sick, with a high fever and shaking chills. The plant has been reported for its antimalaria activities against drug resistant strains of Plasmodium falciparum superior to chloroquine and quinine. In addition, all three compounds isolated from the plant according to a study were shown to significantly act in synergy with some first line malaria drugs like artemether.

In addition, Kigelia Oil and extracts is used for the treatment of rheumatism, dysentery and veneral diseases. It is also used as ringworm and tapeworm expellant, while other uses include treatment of haemorrhages, diabetes, pneumonia and toothache. READ: How To Use Kigelia Africana For Enlargement

Side Effects Of Kigelia Africana Extract

Blisters are small pockets of fluid that usually form in the upper layers of skin after it’s been damaged. Raw Kigelia Africana extract can cause blisters in the mouth and on the skin. These blisters are often annoying, painful, or uncomfortable. But in most cases, they aren’t a symptom of anything serious and will heal without any medical intervention.

Some people can experience mild reactions at the point of contact with Kigelia Africana extract, but certain people with allergies or sensitive skin that is prone to eczema or atopic dermatitis may experience severe or longer-lasting effects that will require medical attention. The main side-effects of essential oils like Kigelia Africana oil extract  are allergic reactions. See: Tamanu Oil Extract Benefits

How To Use Kigelia Africana For Breast Enlargement