How to Use LSD Test Kit 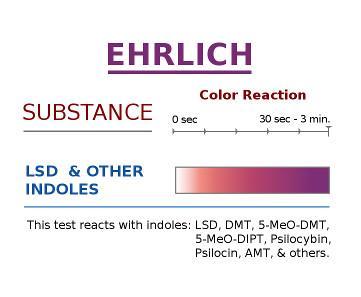 LSD (lysergic acid diethylamide) is a synthetic chemical, made from a substance found in ergot, which is a fungus that infects rye (grain). LSD belongs to a group of drugs known as psychedelics. When small doses are taken, it can produce mild changes in perception, mood and thought. Larger doses may produce visual hallucinations and distortions of space and time.

LSD was studied from the 1950s to the 1970s to evaluate behavioral and personality changes, as well as remission of psychiatric symptoms in various disorders. LSD was used in the treatment of anxiety, depression, psychosomatic diseases and addiction. However, most of the studies were not performed under contemporary standards, and it has taken several decades for a resurgence of interest in LSD research and its therapeutic potential for psychiatry.

Beyond research, LSD is a common drug on the streets. Sometimes, what is sold as LSD can actually be other chemicals such as NBOMe or the 2C family of drugs (part of the new psychoactive substances). These can be quite dangerous, as their quality is inconsistent. Taking too much of these other substances can be fatal with a number of deaths having been reported.

In its pure state, LSD is a white odorless crystalline substance. However, LSD is so potent that an effective dose of the pure drug is so small, it’s virtually invisible. As a result, it’s usually diluted with other materials.

The most common form is drops of LSD solution dried onto gelatin sheets, pieces of blotting paper or sugar cubes, which release the drug when swallowed. LSD is also sometimes sold as a liquid, in a tablet or in capsules.

LSD can be detected in many human samples. Factors that can affect these tests include how much LSD the person took prior to the test, their age, their health, and their weight. The onset and duration of effects of LSD depend on dose taken and the method of use, but most “trips” last between 9-12 hours.

The specifics of how long it’s detectable depends on the type of drug test used:

How to Use LSD Test Kit

Most LSD Test Kit contains what is known as the Ehrlich test or “DMAB test”. It detects indoles such as LSD, DMT, 5-MeO-DMT, 5-MeO-DIPT, Psilocybin, Psilocin, AMT, and others. A color reaction chart, as well as a multi-use testing vial, are also included with the kit.

If you’re testing blotter LSD or geltabs, you’ll likely see less vivid colors compared with testing something more concentrated, like a crystal. You might have to give it some time to see a color change (around 3 minutes). Yet, you will eventually see a color change if you have LSD.

Geltabs (small squares of gelatin containing LSD) can be tested by placing a drop or two of the test liquid on a very small amount of the geltab. Over time, a purple reaction color will appear if LSD is present. Larger gelatin samples (such as jello squares) can’t be tested. Brownies, sugar cubes, cookies etc. can’t be tested with the kit because they contain too much foreign material.

The testing vial that comes with the kit helps prevent your skin from contacting the reagent while testing. Extra testing vials are also great for when you’re on the go. But using a white ceramic plate can help you see the results more easily.

1P-LSD will react slowly with this test. You may only notice a color change after an 1 to 3 hours, and the purple color may be more subtle than it is with “regular LSD”.

Reagents consist mostly of concentrated acid and are strong enough to burn skin and clothing.

Neutralize used reagents using baking soda. If you get some on you/clothing, then immediately wash with lots of soap and water. Dispose of any unwanted reagent with running water and baking soda, ventilate. Store all testing kits away from any heat in a cool, dark place between uses, preferably a fridge. The average shelf life of 1 year can be significantly extended by storing in a freezer (warm to room temperature before use). A positive or negative reaction for a substance does not indicate if it is safe. No substance is 100% safe.