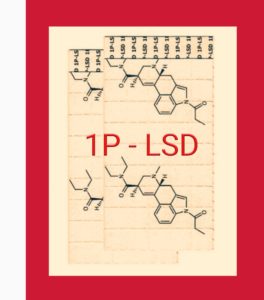 1P-LSD – Chemically known as  1-propionyl-lysergic acid diethylamide is a very potent, long-lasting hallucinogenic substance of the lysergamide class that produces LSD-like psychedelic effects when administered. This psychedelic drug is a derivative and functional analog of LSD and a homolog of ALD-52.

Anecdotal reports from many users appear to suggest that the subjective effects of 1P-LSD are in many ways similar to the effects of LSD in a manner that makes it almost impossible to distinguish one from the other. The effects of 1P-LSD  following recreational use can have far-reaching health consequences and in comparison to other psychedelics such as ayahuasca LSA psilocybin, and LSA, 1P-LSD is significantly more stimulating and fast-paced regarding the specific style of its physical and cognitive effects.

Side Effects of 1P-LSD

The side effects listed in this section are not as a result of improper preparation of set and setting, a bad trip, or inexperience as they have been reported to occur very frequently even among very experienced drug users. The side effects of 1P-LSD include:

Anxiety–  1p-LSD related anxiety is more than just feeling stressed or worried. It manifests as extreme fear, nervousness, restlessness, or panic caused by taking the drug or stopping the drug. Many times these symptoms refuse to go away and can even get worse over time especially among individuals with anxiety prior to 1p LSD use.

Paranoia – involves intense anxious or fearful feelings and thoughts often related to persecution, threat, or conspiracy. This is often manifested as an irrational and persistent feeling that people are ‘out to get you’. This is one of the side effects that often accompany the use of LSD-1P.

Delusions – delusion is one of the many side effects of 1P-LSD, it involves an idiosyncratic belief or impression maintained despite being contradicted by reality or rational argument. It is an associated mental state in which a person using 1P-LSD cannot tell what is real from what is imagined, resulting in unshakable beliefs in something untrue or not based on reality.

Drug-Induced psychosis- Drug-induced psychosis, also known as substance-induced psychotic disorder, refers to any psychotic episode that is linked with the use or abuse of an intoxicant, chemical, or drugs, including those produced by the body itself. Persons with underlying mental health issues or behavioral conditions are very susceptible to 1P-LSD induced psychosis. SEE: Does LSD (Acid) Show Up On A Drug Test

Although 1P-LSD has been sold online as a designer drug since 2015, it is not a scheduled substance under the United Nations Convention on Psychotropic Substance. Psychedelic substances including 1P-LSD   are illegal and prohibited in most countries around the world. In the United States, the drug is not a scheduled drug under the Controlled Substance Act (CSA). However, since 1P-LSD is an analog of LSD, it implies that sale, being in possession, or buying 1p-LSD for human consumption can be illegal under the Federal Analogue Act, under which any substance “substantially similar” to an illegal substance listed in Schedule I or II is treated like those in the schedules. Recently, the Swedish public health agency added 1p-LSD as a health hazard under the act on the prohibition of certain goods dangerous to health (SFS 1999:42). With effect from January 26, 2016, 1p-LSD listed as N,N-dietyl-6-metyl-1-propionyl-9,10-didehydroergolin-8-karboxamid became an  illegal substance in Sweden.