What Do They Cut Off In A Female Circumcision?

Female circumcision also known as Female Genital Mutilation (FGM), is defined as all procedures that involve partial or total removal of the external female genitalia. It also refers to all other procedures that result in injury to the female genital organs for non-medical reasons. The global prevalence of Female Genital Mutilation (FGM) ranges from 0.6% up to 98% and has many health and psychological impacts including abnormalities in female sexual function.  Female circumcision is common in countries such as Egypt, Cameroon, Nigeria and Ethiopia. Many countries in Western, Eastern, and North-Eastern Africa also engage in this practice. The practice is mostly carried out by traditional circumcisers, who often play other central roles in communities, such as attending childbirths. FGM is conducted from days after birth to puberty and beyond. More than 3 million girls are estimated to be at risk for FGM annually.

What Do They Cut Off In A Female Circumcision?

Female circumcision or Female Genital Mutilation is classified into four major sub types. They are:

Type 1 – Clitoridectomy: This involves the partial or total removal of the clitoris (a small, sensitive and erectile part of the female genitals) and, in very rare cases, only the prepuce (the fold of skin surrounding the clitoris).

Type 2 – Excision: This procedure involves the partial or total removal of the clitoris and the labia minora, with or without excision of the labia majora (the labia are “the lips” that surround the vagina).

Type 3 – Infibulation: This type of Female circumcision or female genital mutilation involves the narrowing of the vaginal opening through the creation of a covering seal. The seal is formed by cutting and re-positioning the inner, or outer, labia, with or without removal of the clitoris.

Type 4 – Others: All other harmful procedures (cultural , traditional , religious) to the female genitalia for non-medical purposes, e.g. pricking, piercing, incising, scraping and cauterizing the genital area.

What is the reason for female circumcision?

There are several reasons why some people support female circumcision or FGM. Most of female circumcision proponents believe it is a religious obligation that must be fulfilled. Traditionalists embrace the practice because they see it as a  necessary rite of passage into womanhood which ensures cleanliness or better marriage prospects. Another major reason for female circumcision according to adherents, is that FGM prevents promiscuity and excessive clitoral growth, preserves virginity, enhance and male sexuality. it is important to emphasize that female circumcision has none of these benefits.

The Disadvantages of Female Circumcision

Female circumcision/ Female Genital Mutilation has no health benefits for girls and women but comes with several dangers, disadvantages and potential complications for both women and new borns. The dangers and side effects of female circumcision are: 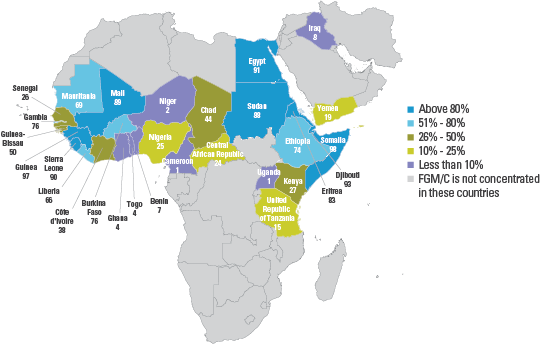 Although the practice of female circumcision can be found in many communities around the world, Africa appears to be the continent where the practice is most prevalent. Around 30 countries in Africa are known to practice female circumcision they include: Benin, Burkina Faso, Cameroon, Central African Republic, Chad, Cote d’Ivoire, Democratic Republic of Congo, Djibouti, Egypt, Eritrea, Ethiopia, Gambia, Ghana, Guinea, Guinea-Bissau, Kenya, Liberia, Mali, Mauritania, Niger, Nigeria, Senegal, Sierra Leone, Somalia, Sudan, Tanzania, Togo, Uganda and Zambia. In recent times Kenya has seen a setback in its progress to eradicate female genital mutilation (FGM) after an open parade in defiance of the government clampdown on the practice took place this week. Almost 2,800 girls from the Kuria community in south-western Kenya have undergone FGM.

Nigeria, has the highest number of circumcised females in the world, accounting for about one-quarter of the estimated 115–130 million women who have either being circumcised women or whose genitals have been mutilated. Available data shows that 27% of Nigerian women between the ages of 15 and 49 are victims of FGM . In May 2015 it became illegal to circumcise a woman in Nigeria following the signing into law of a federal law banning Female Genital Mutilation in Nigeria. Click To Read Female Circumcision In Nigeria

Some ethnic groups in Asia practice female circumcision including in communities in India, Indonesia, Malaysia, Pakistan and Sri Lanka.

Female Circumcision India : In India, female circumcision is practiced by the close-knit Dawoodi Bohra community, a Shia Muslim sect who consider the procedure known as khatna a religious obligation. In most cases, part of the clitoral hood is cut, but in some cases girls have had part, or all of the clitoris cut.

Female Circumcision in Malaysia: In 2009, Malaysia’s religious authority ruled circumcision was obligatory, unless harmful. A small study of Malay Muslims in north Malaysia found more than 90 percent of women had been cut, with 80 percent citing religious reasons. In 2012, the health ministry called for the procedure to be standardized.

Female Circumcision in Singapore: Female circumcision or Female Genital Mutilation is legal in Singapore and performed in clinics for around 20-35 Singapore dollars ($15-$26), adherents of this practice cite religious, cultural and hygiene reasons.

Female Genital Mutilation in Thailand: A ‘symbolic form’ of female genital cutting, a pricking or scratching of the clitoral hood is reported to be practised in  Satun province, located on the Andaman of southern Thailand.

Female Genital Mutilation in Madives: Female circumcision or female genital mutilation is legal in Maldives. It has been actively encouraged by some influential Islamic scholars. One issued a fatwa in 2012 saying female circumcision was “part of nature”.

According to the minaret, islamic law protects a woman’s right to sexual enjoyment, as demonstrated by the fact that a woman has the right to divorce on the grounds that her husband does not provide sexual satisfaction. It follows that Islamic law prohibits clitorodectomy (partial or complete removal of the clitoris) or infibulation (excision of part or all of the external genitalia and stitching/narrowing of the vaginal opening), or any genital mutilation which impairs the woman’s ability to enjoy sexual relations. Such prohibitions are consistent with the hadithic warning against severity in female circumcision. Opponents of this school of thought such as Dr. Haamid al-Ghawaabi of  islamqa  who averred that Female circumcision has not been prescribed for no reason, rather there is wisdom behind it, and it brings many benefits. He stated that secretions of the labia minora accumulate in uncircumcised women and turn rancid, so they develop an unpleasant odour which may lead to infections of the vagina or urethra.  He further stated that circumcision reduces excessive sensitivity of the clitoris which may cause it to increase in size to 3 centimeters when aroused, which is very annoying to the husband, especially at the time of intercourse stressing that female   circumcision also reduces the excessive  desire for sex.

What countries is female circumcision illegal?

Read Causes and Remedies of Pimple Like Bump on Clitoral Hood

Causes and Remedies of Pimple Like Bump on Clitoral Hood