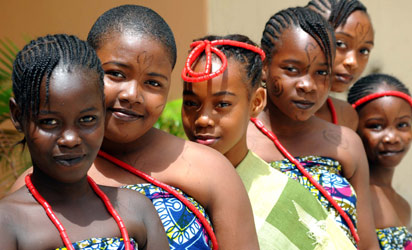 What is Female genital Mutilation?

The global prevalence of female genital mutilation (FGM) ranges from 0.6% up to 98% and has many health and psychological impacts, including abnormalities in female sexual function. It is mostly carried out using a blade by traditional circumcisers, who often play other central roles in communities, such as attending childbirths. FGM is conducted from days after birth to puberty and beyond but most girls are cut before the age of five. Around 3 million girls are estimated to be at risk for FGM annually.

FGM is among the harmful traditional practices In Nigeria, the country has the highest number of circumcised females in the world, accounting for about one-quarter of the estimated 115–130 million women who have either been circumcised women, or whose genitals have been mutilated. Most cases of female genital mutilation occur in the rural areas. Available data shows that 27% of Nigerian women between the ages of 15 and 49 are victims of FGM.

According to UNICEF, the national prevalence of FGM in Nigeria is 61% among Yoruba, 45% among Ibo and 1.5% among Hausa-Fulani ethnic group. A further breakdown of the female genital mutilation picture in Nigeria by the United Nations Population Fund, UNFPA reveals that Osun State ranked the highest in the prevalence of Female Genital Mutilation practice in Nigeria with over 76.3 per cent. The UN said the practice was high in the South-West in spite of the geo-political zone’s high literacy and awareness rate. According to the report, Osun had 76.3% prevalence rate, Ekiti had 71.2%, Oyo, 69.7%; Ebonyi, 55.6%; Imo, 48.8%; and Lagos, 44.8%. Click Here to Download : Female Genital Mutilation In Nigeria Fact Sheet Pdf (UNICEF)

When was FGM Banned in Nigeria?

FGM was banned in Nigeria in May 2015 when President Goodluck Jonathan signed the Violence Against Persons (Prohibition) Act, 2015. The Act prohibits female circumcision or genital mutilation, forceful ejection from home and harmful widowhood practices. It also prohibits abandonment of spouse, children and other dependents without sustenance, battery and harmful traditional practices.

Female circumcision or female genital mutilation is classified into four major sub types. They are:

Type 1 – Clitoridectomy: This involves the partial or total removal of the clitoris (a small, sensitive and erectile part of the female genitals) and in very rare cases, only the prepuce (the fold of skin surrounding the clitoris).

Type 2 – Excision: This procedure involves the partial or total removal of the clitoris and the labia minora, with or without excision of the labia majora (the labia are “the lips” that surround the vagina).

Type 3 – Infibulation: This type of Female circumcision or female genital mutilation involves the narrowing of the vaginal opening through the creation of a covering seal. The seal is formed by cutting and repositioning the inner or outer labia, with or without removal of the clitoris.

Type 4 – Others: All other harmful procedures (cultural, traditional, religious) to the female genitalia for non-medical purposes e.g. pricking, piercing, incising, scraping and cauterizing the genital area. 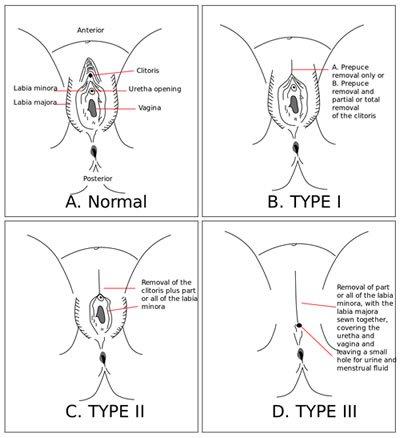 What is the reason for female circumcision?

There are several reasons why some Nigerians support female circumcision or FGM. Majority of female circumcision proponents believe it is a religious obligation that must be fulfilled. Traditionalists in Nigeria support the practice because they see it as a necessary rite of passage into womanhood which ensures cleanliness or better marriage prospects. Another major reason for female circumcision according to adherents, is that FGM prevents promiscuity and excessive clitoral growth, preserves virginity, and enhance female sexuality. See Meningitis vaccine in Nigeria

Dangers and Side Effects of Female Genital Mutilation

Female circumcision/ Female genital mutilation has no health benefits for girls and women but comes with several dangers, disadvantages and potential complications for both women and newborns. The dangers and side effects of female circumcision are: