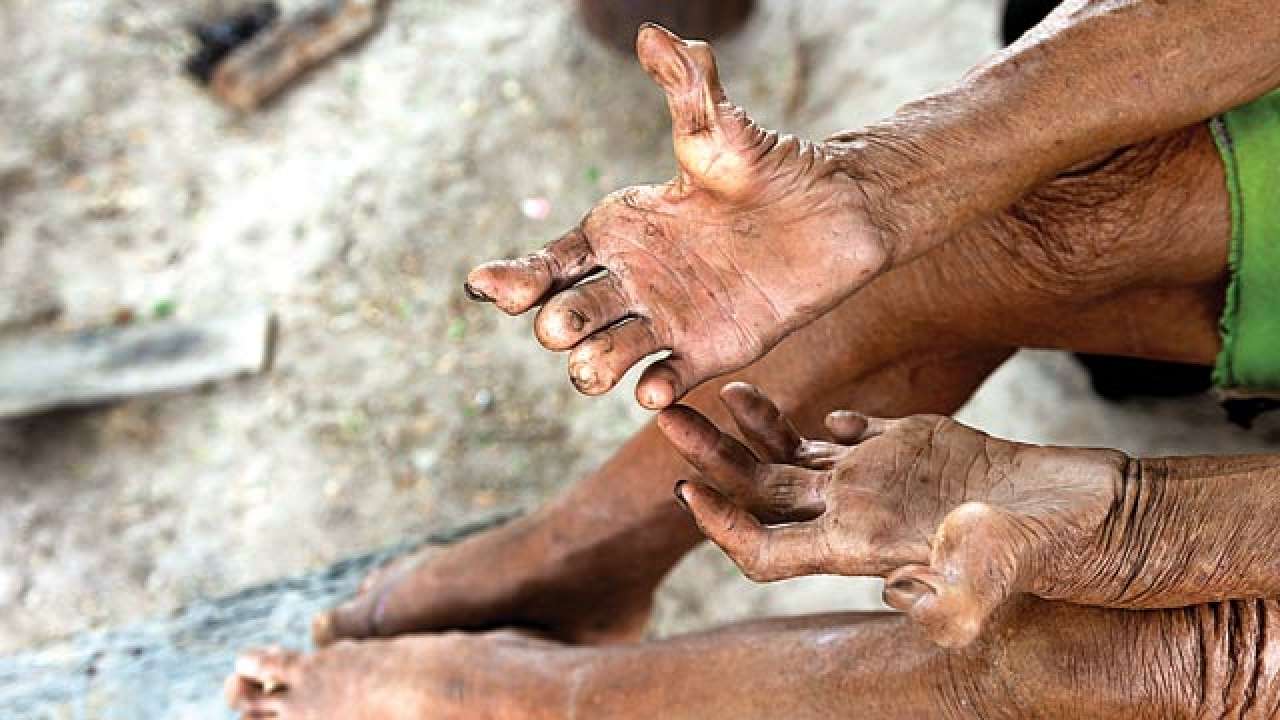 Leprosy is a disease mainly caused by the bacteria Mycobacterium leprae, which causes damage to the skin and the peripheral nervous system. The disease develops slowly (from six months to 40 years) and results in skin lesions and deformities, most often affecting the cooler places on the body (for example, eyes, nose, earlobes, hands, feet, and testicles). The skin lesions and deformities can be very disfiguring and are the reason that historically people considered infected individuals outcasts in many cultures.

Although human-to-human transmission is the primary source of infection, three other species can carry and (rarely) transfer M. leprae to humans: chimpanzees, mangabey monkeys, and nine-banded armadillos. The disease is termed a chronic granulomatous disease, similar to tuberculosis, because it produces inflammatory nodules (granulomas) in the skin and peripheral nerves over time.

Leprosy is contagious but is considered to be only mildly contagious. However, acquisition of the disease usually occurs after long-term (months to years) contact with an untreated individual with the disease. It is passed from person to person via droplets from the nose and mouth during close and frequent contact with an untreated individual with leprosy.

What is the history of leprosy (Hansen’s disease)?

Unfortunately, the history of leprosy and its interaction with man is one of suffering and misunderstanding. The newest health research suggests that M. leprae has infected people since at least as early as 4000 B.C., while the first known written reference to the disease was found on Egyptian papyrus in about 1550 B.C. The disease was well recognized in ancient China, Egypt, and India, and there are several references to the disease in the Bible. Many cultures thought the disease was a curse or punishment from the gods because they did not understand the disease, it’s very disfiguring, slow to show symptoms and signs, and had no known treatment. Consequently, priests or holy men treated leprosy, not physicians.

Are there different forms (classifications) of leprosy?

There are multiple forms of leprosy described in the literature. The forms of leprosy depend on the person’s immune response to M. leprae. A good immune response can produce the so-called tuberculoid form of the disease, with limited skin lesions and some asymmetric nerve involvement. A poor immune response can result in the lepromatous form, characterized by extensive skin and symmetric nerve involvement. Some patients may have aspects of both forms. Currently, two classification systems exist in the medical literature: the WHO system and the Ridley-Jopling system. The Ridley-Jopling system is composed of six forms or classifications, listed below according to increasing severity of symptoms:

Indeterminate leprosy: a few hypopigmented macules; can heal spontaneously, this form persists or advances to other forms

Tuberculoid leprosy: a few hypopigmented macules, some are large and some become anesthetic (lose pain sensation); some neural involvement in which nerves become enlarged; spontaneous resolution in a few years, persists or advances to other forms; cell-mediated immune response appears in this classification but is almost absent in lepromatous leprosy

Mid-borderline leprosy: many reddish plaques that are asymmetrically distributed, moderately anesthetic, with regional adenopathy (swollen lymph nodes). The form may persist, regress to another form, or progress

Lepromatous leprosy: Early lesions are pale macules (flat areas) that are diffuse and symmetric. Later medical professionals can find many M. leprae organisms in the lesions. Alopecia (hair loss) occurs. Often patients have no eyebrows or eyelashes. As the disease progresses, nerve involvement leads to anesthetic areas and limb weakness. Progression leads to aseptic necrosis (tissue death from lack of blood to area), lepromas (skin nodules), and disfigurement of many areas, including the face. The lepromatous form does not regress to the other less severe forms. Histoid leprosy is a clinical variant of lepromatous leprosy that presents with clusters of histiocytes (a type of cell involved in the inflammatory response) and a grenz zone (an area of collagen separating the lesion from normal tissue) seen in microscopic tissue sections.

In Nigeria, leprosy remains a disease of public health importance with over 3500 people diagnosed with leprosy every year and about 25% of patients having some degree of disability. Stigma and discrimination against persons and communities affected by leprosy in Nigeria is very high, due to myths and superstitions associated with fear of the disease

Leprosy is airborne and is transmitted mainly through spread of nasal secretions of patients infected by Hansen’s bacillus and also through inoculation into broken skin. There are also other possibilities such as transmission through insects which cannot be completely ruled out.

Clinical signs are easy to observe. In a country or area with a high incidence of leprosy, an individual should be regarded as having leprosy if he or she shows one of the following cardinal signs:

The skin lesion can be single or multiple, usually less pigmented than the surrounding normal skin. Sometimes the lesion is reddish or copper-coloured. A variety of skin lesions may be seen but macules (flat), papules (raised), or nodules are common. Sensory loss is a typical feature of leprosy. The skin lesion may show loss of sensation to pin prick and/or light touch. Thickened nerves, mainly peripheral nerve trunks constitute another feature of leprosy. A thickened nerve is often accompanied by other signs as a result of damage to the nerve. There may be loss of sensation in the skin and weakness of muscles supplied by the affected nerve.

In order to reinvigorate efforts for leprosy control WHO has developed the “Global Leprosy Strategy 2016‒2020”, which is structured around 3 core pillars:

The targets of the new global strategy to be met by 2020 are:

Moisturizer Withdrawal: Everything You Should Know
What is leprosy
July 9, 2020 Family & Community HealthPublic HealthLeave a comment