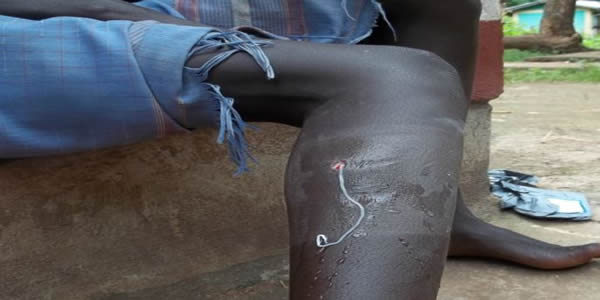 Guinea Worm Disease (also known as Dracunculiasis) is a parasitic infection caused by a long thread-like worm, Dracunculiasis medinensis. The worm is about 1-2 millimeters wide; the female worm measures about 60 to 100 centimeters, with the adult male worm being a few centimeters shorter. The disease has been in existence since ancient times. The word “Dracunculiasis” is of Latin origin which means “affliction with little dragons”. In 1986, there was an estimated 3.5million cases in parts of Africa, Asia, and the Middle East. There have been worldwide efforts at eradicating this disease and in 2015, only 22 cases of Guinea worm disease were reported worldwide. However, the only four Guinea Worm endemic countries are in Africa (Chad, Mali, Ethiopia, and South Sudan). By October 2016, the number of human cases had risen to 23, compared with 22 cases in 2015, largely due to 15 cases of human transmission in Chad.

In Nigeria, seven consecutive years have elapsed without a case of Guinea worm disease. The Country has been officially certified free of Dracunculiasis transmission by the International Commission for the Certification of Dracunculiasis Eradication (ICCDE).

Guinea worm disease is transmitted when people who have little or no access to potable water, ingest stagnant water contaminated with the parasite-infected water fleas (cyclops), which carry the infective guinea-worm larvae. The larvae are eaten by the water fleas and reach maturation within two weeks, after which they can infect humans. Infection occurs from drinking contaminated water sources e.g. ponds, pools in drying riverbeds, and shallow uncovered wells. People cannot get infected when they drink from flowing waters (streams and rivers). There is a seasonal pattern to the disease; in dry regions, people are infected during the rainy season, when stagnant surface water is available. In wet regions, people get infected during the dry season, when surface water is drying up and becoming stagnant.

Symptoms of the disease like swelling of the feet, itching, and blister formation are usually experienced by infected individuals. This occurs 10-14 months after the person has been infected. It is then followed by the emergence of the guinea worm from the blisters formed (on the feet, in most cases). Other symptoms may include fever, nausea, and vomiting as well as an allergic reaction from the migration of the female adult worm from the deep tissue to the skin.

There is no drug treatment for guinea worm disease. Once part of the worm starts to emerge, the rest of the worm can only be pulled out a few centimeters each day. This is done by winding the worm around a small stick or piece of gauze. The process of pulling out the worm can range from days to a few weeks. Analgesics such as aspirin and ibuprofen can help to reduce pain and swelling. Antibiotic ointment can help prevent secondary bacterial infections. The worm can also be surgically removed by a trained doctor in a medical facility before a blister forms.

Prevention of Guinea worm disease can be achieved through two strategies

Prevention of people from drinking water contaminated with the water flea(cyclops): This can be through encouraging treatment of drinking water which can be achieved through the use of a fine-mesh filter, ceramic, or sand filters to remove cyclops and boiling of water before drinking.

Control measures are also geared towards vector control. Aggressive innovative use of temephos to kill the vector has been recommended by the International Commission for the Certification of Dracunculiasis Eradication (ICCDE). Eradication of Guinea worm has been achieved with strategies of the Guinea Worm Eradication Programme (GWEP). This program includes a group of national and international partners whose main purpose is to support the global eradication of Guinea Worm. By October 2016, Guinea worm only exists in four countries, down from 20 countries in the 1980s.

In recent years, the understanding has grown that biological and technical feasibility is not the only criterion to consider before launching an eradication program. Costs and benefits are no less important. The benefits of dracunculiasis eradication, in contrast to those of smallpox and polio, will accrue almost exclusively to the population in which the disease is endemic.

In the past, most cases of dracunculiasis went unreported for a number of reasons: most health centers had little to offer the patient besides palliative treatment; most patients live in poor, remote rural areas and are hindered by their disease from walking to a health facility; and most recover spontaneously after the expulsion of the worm. For example, a large teaching hospital in Nigeria never saw dracunculiasis cases in the Casualty Department, although the disease was endemic in villages a few kilometers away. Because few cases were reported, the disease was often considered an exotic curiosity rather than a major public health problem. However, in areas of endemicity, its social, economic, nutritional, and educational consequences, and the costs incurred by the individuals, households, and communities which suffer from it, can be substantial.

Dracunculiasis is rarely fatal; studies in India based on medical records suggest a case fatality rate of 0.1% or less, and this is probably a generous estimate because only persons with severe complications usually seek treatment from health facilities. The proportion of patients permanently disabled by the disease is also small; a number of studies have found it to be less than 1%.

The social impact of guinea worm disease is mainly attributable to the temporary disability suffered by the patient. Two longitudinal studies in Nigeria found that 58 to 76% of patients were unable to leave their beds for approximately a month during and after the emergence of the worm. The more severe and protracted disability is associated with secondary infection of the lesion; this occurs in roughly half the cases.

The impact of this temporary disability is reinforced by the seasonal pattern of worm emergence, often peaking at stages of the agricultural year when labor is in maximum demand. This seasonality means that a whole community can be laid prostrate simultaneously and household members can be prevented from substituting for one another in agricultural and other tasks. The impact of guinea worm disease does not end when the worm is out and the sufferer returns to work. A study in Ghana found that, between 12 and 18 months after the emergence of a worm, 34% of patients still had some difficulty performing everyday activities, usually due to pain attributable to its location and the date of onset to the episode of dracunculiasis. While this disability is not necessarily permanent, it extends beyond the incapacity occurring during worm emergence.

Some attempts to estimate the economic impact of dracunculiasis have simply multiplied the number of days of labor lost by the mean value of production per day or by the wage rate. From such a simplification, it is a small step to multiply the loss per household to derive an estimated cost for a whole region. One such study, based on a survey of 87 households, estimated that the rice-growing areas in three states of southern Nigeria sustained an annual loss of $20 million due to guinea worm disease. In spite of its simplistic argument, this study was extremely effective in mobilizing the support of senior politicians in Nigeria for the eradication of the disease.

Is It Safe For A Pregnant Woman To Deworm?
Guinea Worm Disease (Dracunculiasis)
July 9, 2020 Family & Community HealthPublic HealthLeave a comment