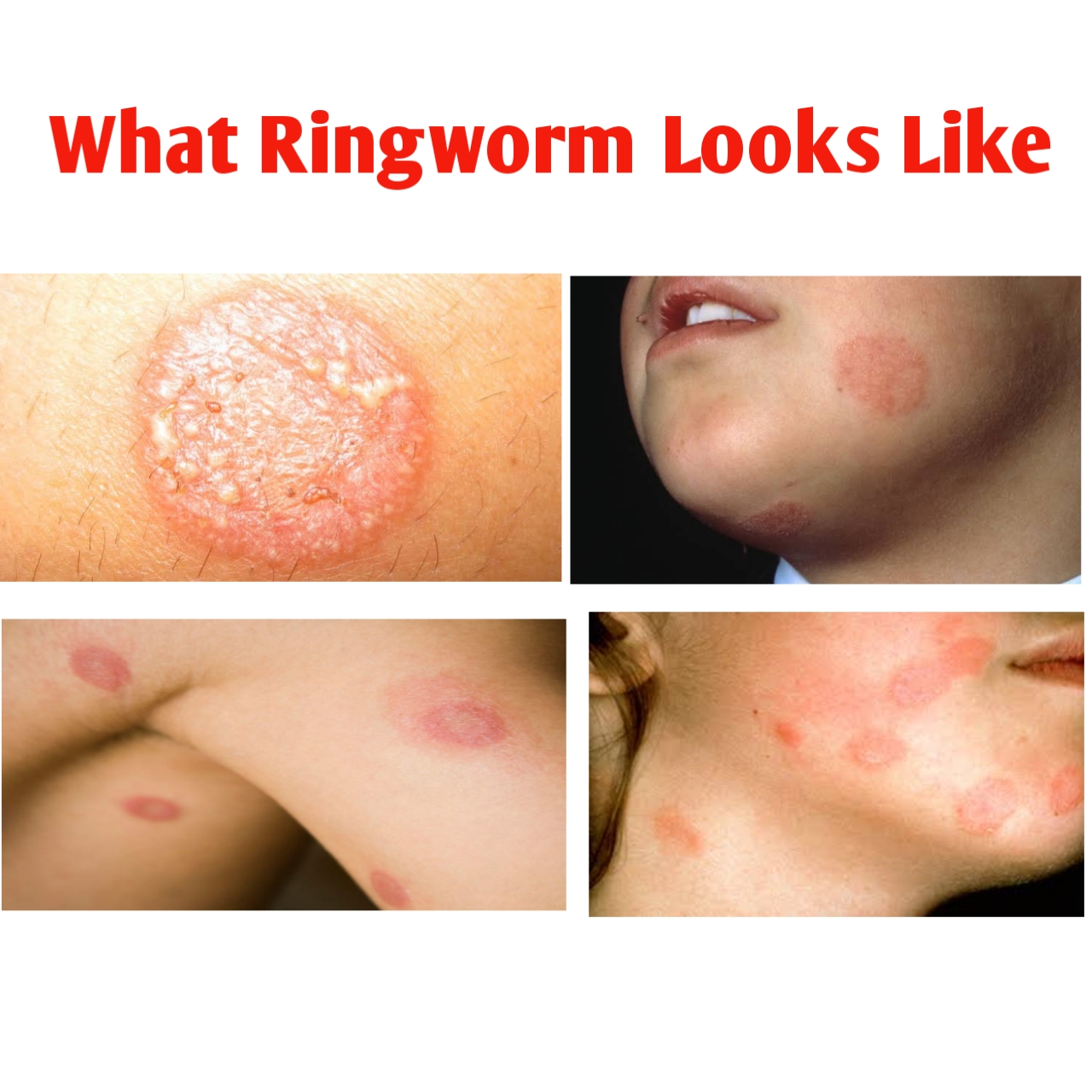 Dermatophytosis, also known as ringworm, is a fungal infection of the skin. Typically, it results in a red, itchy, scaly, circular rash. Hair loss may occur in the area affected. Symptoms begin four to fourteen days after exposure. Multiple areas can be affected at a given time. About 40 types of fungi can cause ringworm. They are typically of the Trichophyton, Microsporum, or Epidermophyton type. 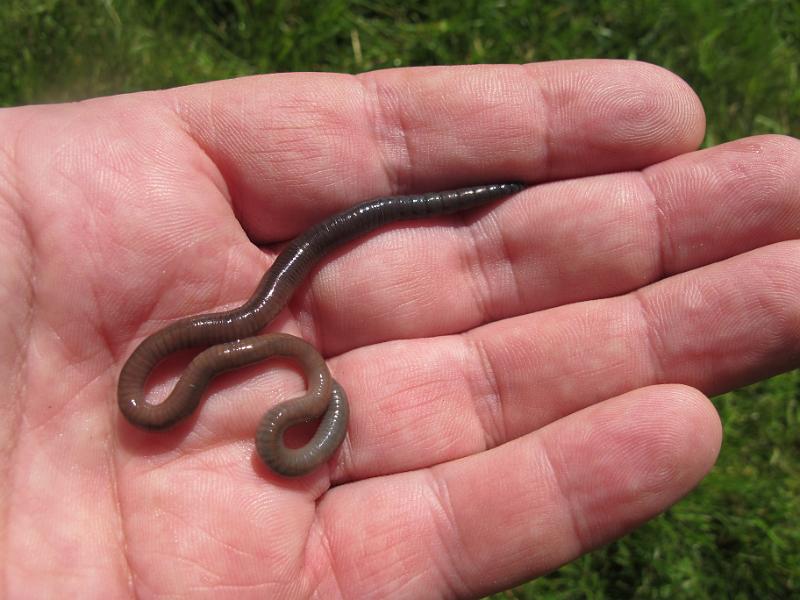 Does Ringworm Mean I Have Worms?

Despite its name, ringworm is not caused by a worm. The ancient Greeks called ringworm “herpes,” meaning “ring,” while the ancient Romans called it “tinea,” referring to the larval stage of a clothes moth.

Characterized by round skin lesions (rings) and early belief that the infection was caused by a parasitic worm, the English word “ringworm” was born sometime in the early 15th century. We now know a fungus causes the condition, and not a worm, but the name has stuck.

It wasn’t until 1841 that anyone realized fungus could be responsible for ringworm. In that year, Hungarian physician David Gruby demonstrated that favus, a scalp infection, had a fungal cause. Unfortunately, his research went largely ignored. In 1934, Chester Emmons published a careful study of several species of infectious fungi, which helped pave the way for our modern understanding of the disease. 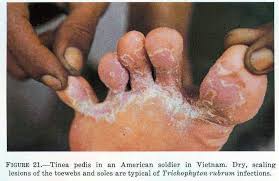 Before then, scattered studies of fungus infections conducted in isolation had led researchers to give about 1,000 different names to about 350 species of related fungus. That study made great progress in clearing up much of the confusion.

How Do You Get Ringworm?

Although the world is full of yeasts, molds, and fungi, only a few cause skin problems. Ringworm fungi are known as dermatophytes — microscopic organisms that feed on the dead tissues of your skin, hair, and nails, much like a mushroom can grow on the bark of a tree. Dermatophytes cause superficial infections—so-called because they occur on the surface of the skin.

Infection is more common in unsanitary and crowded places. That’s because these fungi can live on both skin and surfaces like shower floors, and can be transferred by direct contact with infected clothes, sheets, and towels. Even other mammals, including cats and dogs, can infect humans. 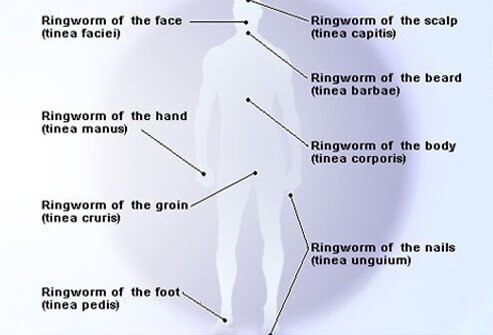 What Types Are There?

There are several types of ringworm of the skin, and they tend to specialize. Different infectious fungi target different body parts, including

On the next several slides, we’ll take a look at the various forms of infection, from the top of your head to bottom of your feet.

Fungal Infections of the Body

Tinea corporis refers to ringworm of the trunk, legs, or arms. Different fungi cause this condition in different parts of the world. It’s common for this infection to originate in the feet or nails, then spread to other body parts. It may spread to the

When fungus affects the skin of the body, it often produces the round spots of classic ringworm, which is characterized by a red ring of scaly skin that grows outward as the infection spreads. Though children are especially vulnerable, it can infect adults as well.

Tinea corporis can be acute or chronic. When acute, the fungus causes suddenly appearing, itchy, red patches that may fill with pus and spread rapidly. When chronic, the infection spreads by slightly inflamed rashes more slowly, and tends to appear in body folds. When the infection is widespread and chronic, it is harder to treat and more likely to reappear.

How Long Does Treatment Take?

With treatment, this disease usually goes away within four weeks. Avoid scratching, as this may lead to additional skin infections.

One of the most distinctive signs of tinea corporis is the appearance of an itchy, red, circular rash in the shape of a ring. This rash may resemble a target or a bullseye, and it usually has raised edges. Finding one of these is a helpful way to distinguish this rash from other common skin rashes such as eczema. Eczema and other rashes may appear similar to ringworm, but they require very different treatment.

One note of caution, though—another skin disease can also cause bullseye rashes. Lyme disease is a serious condition that can cause nerve pain, facial drooping, and brain inflammation, and its characteristic rash is also in the shape of a bullseye. One way to tell the difference is the raised lines that usually accompany fungal rashes.

While fungi cause ringworm, bacteria cause Lyme disease. That’s why doctors use different treatments for the two skin conditions. Because of the serious consequences of Lyme disease, anyone in doubt should seek medical attention immediately.

Tinea manuum finds its way onto human hands through either soil, animals, or human contact. This infection is fairly uncommon and frequently confused with other skin conditions. Symptoms of tinea manuum may include

These symptoms are usually seen on only one hand. The people most likely to contract this skin infection are those who

How to Prevent Ringworm Infection

Ringworm is difficult to prevent. The fungus that causes it is common, and the condition is contagious even before symptoms appear. Take these steps to reduce your risk of ringworm:

Educate yourself and others. Be aware of the risk of ringworm from infected people or pets. Tell your children about ringworm, what to watch for and how to avoid infection.

1- Keep clean. Wash your hands often. Keep shared areas clean, especially in schools, child care centers, gyms and locker rooms. If you participate in contact sports, shower right after practice or a match and keep your uniform and gear clean.

3- Avoid infected animals. The infection often looks like a patch of skin where fur is missing. If you have pets or other animals, ask your veterinarian to check them for ringworm.

How To Use Tydineal Cream