What Is A Pill Press: How To Tell If A Pill Is Pressed 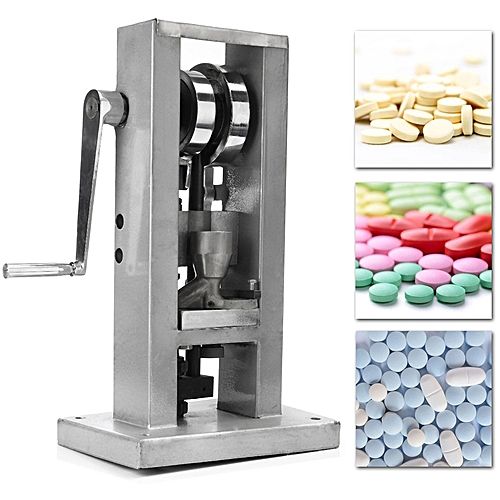 A pill press is a tablet making mechanical device that compresses powder into pills of uniform size and weight. A pill press can be used to manufacture pills of a wide variety of materials, including pharmaceuticals, nutraceuticals, cleaning products, industrial pellets and cosmetics.

To form a pill, the granulated powder material must be metered into a cavity formed by two punches and a die, and then the punches must be pressed together with great force to fuse the material together. In the first step of a typical operation, the bottom punch is lowered in the die creating a cavity into which the granulated feedstock is fed. The exact depth of the lower punch can be precisely controlled to meter the amount of powder that fills the cavity.

The excess is scraped from the top of the die, and the lower punch is drawn down and temporarily covered to prevent spillage. Then, the upper punch is brought down into contact with the powder as the cover is removed. The force of compression is delivered by high pressure compression rolls which fuse the granulated material together into a hard pill. After compression, the lower punch is raised to eject the pill.

Pill tooling design is critical to ensuring a robust pill compression process.  Pharmaceutical pill compression tool design include tooling set, head flat, top head angle, top head radius, head back angle, and punch shank. As well as ensuring a single dose of drug, the pill tooling is also critical in ensuring the size, shape, embossing and other physical characteristics of the pill that are required for identification.

What are the types of pill press?

There are 2 types of pill presses: single-punch and rotary pill presses. Most high-speed pill presses take the form of a rotating turret that holds any number of punches. As they rotate around the turret, the punches come into contact with cams which control the punch’s vertical position. Punches and dies are usually custom made for each application, and can be made in a wide variety of sizes, shapes, and can be customized with manufacturer codes and scoring lines to make pills easier to break. Depending on pill size, shape, material, and press configuration, a typical modern press can produce from 250,000 to over 1,700,000 pills an hour.

Drug counterfeiters can acquire a pill press and a counterfeit pill mold to churn out counterfeit medications for less than $500. Unfortunately, “garage manufacturers” are not careful about manufacturing controls, and their products often contain fatal doses of fentanyl or other drugs. Since 2015, bootleg prescription drugs made with machines like these have killed unsuspecting Americans in all states. Fentanyl is a powerful synthetic opioid that is similar to morphine but is 50 to 100 times more potent.

According to the DEA, illicit fentanyl, primarily manufactured in foreign clandestine labs and smuggled into the United States through Mexico, is being distributed across the country and sold on the illegal drug market.  Fentanyl is being mixed in with other illicit drugs to increase the potency of the drug, sold as powders and nasal sprays, and increasingly pressed into pills made to look like legitimate prescription opioids.  Because there is no official oversight or quality control, these counterfeit pills often contain lethal doses of fentanyl, with none of the promised drug.

There is significant risk that illegal drugs have been intentionally contaminated with fentanyl.  Because of its potency and low cost, drug dealers have been mixing fentanyl with other drugs including heroin, methamphetamine, and cocaine, increasing the likelihood of a fatal interaction.

The good news is that public health authorities are fighting back. Recently, the Province of British Columbia introduced the Pill Press and Related Equipment Control Act to fight against the illegal production of counterfeit pills, particularly those containing opioids, and to help keep them off the streets.

How to Identify a Pressed Pill

Advances in pill press technology is making it increasingly difficult to differentiate a real pill from pressed one. To spot a pressed pill, you are meant to check for differences in the physical appearance (color uniformity, size, shape, consistency etc.) of the drug. As stated by WHO, commonly encountered physical defects that should be looked out for in tablets include:

In addition, fentanyl testing is one of the most reliable ways of telling a fake from a real pill. The procedure described below can help you pick out fentanyl laced pressed pills.

NOTE: If the strip does not either have one or two lines, the test is invalid. If used correctly, fentanyl testing strips can detect fentanyl and most of its known analogs, including carfentanil. However, they cannot detect all of them. A negative result, therefore, does not guarantee your drugs are free from all fentanyl analogs or other dangerous synthetic opioids. Read: How To Spot Fake RP 30 Pills

How To Spot Blue M 30 Pill Fake Vs Real
pill press
August 28, 2021 Family & Community HealthPublic HealthComments Off on What Is A Pill Press: How To Tell If A Pill Is Pressed