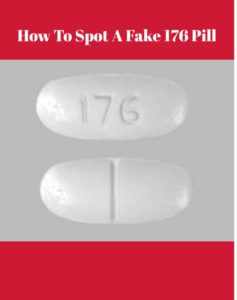 Fake drugs also referred to as counterfeit drugs can be defined as illegally produced drugs or pharmaceutical preparations that may be contaminated or contain the wrong or no active ingredient at all. They sometimes have the right active ingredient but at the wrong dose. Fake drugs are illegal and may be harmful to your health. Each year, fake or substandard medications kill more than 300000 people worldwide.

The White, Elliptical / Oval pill with imprint 176 has been identified as Acetaminophen and hydrocodone bitartrate 325 mg / 10 mg, a Schedule 2 controlled substance under the Controlled Substance Act (CSA). The drug is supplied by Sun Pharmaceutical Industries Inc.

An increasing number of deaths have been linked to fake 176 white pill (lorcet) laced with illicit fentanyl, a dangerous and sometimes deadly drug that is 50 times more potent than morphine sold by neighborhood dealers. According to a former drug investigator for the Cincinnati Police department who is now president of the International Health Facility Diversion Association, “Dealers brag about the potency of their products, and even brag when someone overdoses or even dies as proof of the superiority  of their product. Screwed up thought process, but nevertheless that’s the world of illicit drug dealing.” READ: How To Spot Fake surgical Instruments and Medical devices

How to Spot a 176 White Pill fake or Counterfeit

Fake drug manufacturers are acquiring new technologies, making it easier to make fake pills look very much like the real thing. Sometimes, it is difficult to tell fake 176 pills from an original. Here is how to detect a 176 pill fake:

– Visual inspection as stated by World Health Organization (WHO) (1999) still remains the first step in identifying potential fake drug irrespective of the analytical methods used. Look at the fonts in the imprints on the pills and the pack for inconsistencies

– A fake 176 pill will sometimes have excessive powder and/or pieces of tablets at the bottom of the container (from abraded, crushed or broken tablets);

-A fake 176 pill easily cracks or check for discoloration and fusion of tablets.

-If the price of 176 pill you are being offered is far cheaper than what is expected, then you have to think twice, the product might be fake or counterfeit. However, this may not always be true especially for some products (fake innovator/generic brands) which may be sold at the same price as the genuine one.

Many communities are saturated with counterfeit, gray and substandard drugs and the attendant negative impacts of these drugs know no bound. Drugs are poisons and adequate care should always be taken to avoid the consequences and side effects of a fake. The tips outlined in this article will not only help reduce your chances of purchasing, using and suffering the untoward effects of a fake 176 white pill (Lorcet), but will also help you save money. You can contribute your own quota to fight against fake and counterfeit drugs by sharing this information. You can also let us know  your thoughts in the comment section. Also See: How to Spot Fake, Counterfeit Watson 853 White Pill [Norco]