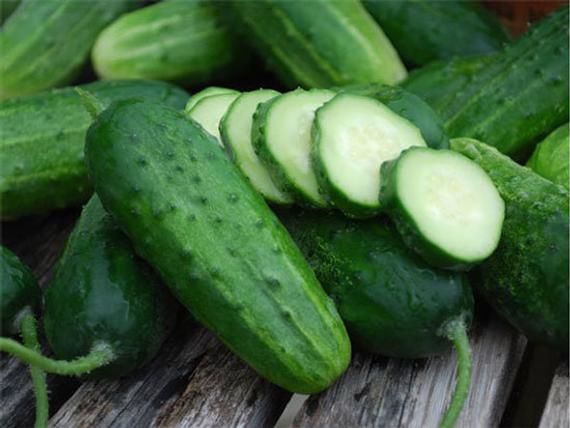 Cucumbers known scientifically as Cucumis sativus belongs to the same botanical family as melons (including watermelon and cantaloupe) and squashes (including summer squash, winter squash, zucchini and pumpkin). Commercial production of cucumbers is usually divided into two types. “Slicing cucumbers” are produced for fresh consumption.

Cucumbers provides us with a unique combination of conventional nutrients and phytonutrients. In terms of conventional nutrients, we are talking about a food that rises high in a food rating system with two excellents (for vitamin K and the mineral molybdenum), one very good (for the B vitamin, pantothenic acid), and 8 goods (for vitamin C, vitamin B1, and biotin in the vitamin category and for copper, magnesium, manganese, phosphorus, and potassium in the mineral category).

In addition, cucumbers also contain fisetin – a flavonoid that has been of special interest to researchers not only because of its antioxidant and anti-inflammatory properties but also because of its potential for risk reduction in the case of certain cancer types. Cucumbers may play a role in controlling and preventing diabetes. It contains substances that may help lower blood sugar or stop blood glucose from rising too high. One theory is that the cucurbitacins in cucumber help regulate insulin release and the metabolism of hepatic glycogen, a key hormone in the processing of blood sugar.

Generally, this plant can help with cardiovascular system problems, type 2 diabetes, and help prevent the development of some type cancer. According to an article in the International Journal of Health Services, cucurbitacins found in this plant may help prevent cancer by stopping cancer cells from reproducing. A 133-g cup of chopped cucumber with its skin also provides around 1 g of fiber. Fiber may help protect against colorectal cancer.

Are There any Benefits Of Eating Cucumber At Night?

Cucumber is usually considered a vegetable because of how it’s used in the culinary world. However, as it grows from flowers and contains seeds, it’s botanically a fruit.

According to The National Sleep Foundation, eating certain foods before bed can interfere with sleep due to the body’s digestive processes. They recommend avoiding foods with processed sugars just before bed, as these can cause energy levels to rise and fall quickly. Choosing fresh fruit may be a better option.

However, health experts advise against eating fruits including cucumber too close to bed time. They advise that food should be consumed at least three hours before your sleep. As far as fruits are considered there should be a gap between proper meals and fruits because both have different effect on the digestive system. Fruits get digested faster and are pushed from the stomach to the intestine much earlier. Meals which are especially rich in protein and fiber require much more time and gastric juices to digest. Therefore it is always advisable to take your cucumber early in the evening. This could be altered according to individual need.