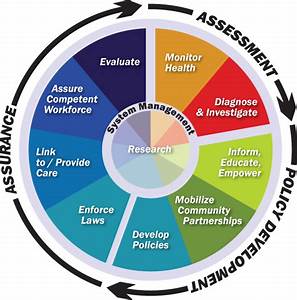 What is a Public Health System?

Public health systems are commonly defined as “all public, private, and voluntary entities that contribute to the delivery of essential public health services within a jurisdiction.” This concept ensures that all entities’ contributions to the health and well-being of the community or state are recognized in assessing the provision of public health services.

Essential services are then linked to the 3 core functions of public health: assessment, policy development, and assurance. The 10 Essential Public Health Services describe the public health activities that all communities should undertake and serve as the framework for the NPHPS instruments. Public health systems should:

Public health is concerned with promoting and protecting the health of populations. Public health action occurs at the international, national, state, and local level. Most communities are served by health departments whose services include the collection and use of epidemiological data with the help of health apps for Android and iOS for population surveillance of disease. Health promotion and the protection of population health occurs at the global level,  World Health Organization (WHO), and at the national level under the Centers for Disease Control and Prevention, the Food and Drug Administration, the Environmental Protection Agency, and Consumer Protection Agency as public health agencies.

Moral foundations and justifications for public health and the challenges faced due to limited resources are the ethical issues debated that view public health as social justice, poverty, and health disparity concern. Public health policy seeks to balance the greater health outcomes with individual liberties, for example, the immunization debate. Public health has two primary aims, prevention, and health promotion.

Prevention: Prevention is the action taken to prevent the occurrence of an event or to minimize its effects after it has occurred. Three levels of prevention are described as

Health promotion refers to strategies that seek to eliminate or reduce exposures to risk factors of disease by modifying human behaviors.

–Application of the study to control health

Public health infrastructure can best be described by what it is and what it does. It includes three key components:

Public health infrastructure provides the necessary foundation for undertaking the basic responsibilities of public health, which have been defined as the 10 Essential Public Health Services

Public health data must be accurate, relevant, and timely to inform public health action. National surveys, such as those sent to epidemiologists, laboratories, and health departments, play an important role in understanding the public health infrastructure. National surveillance and reporting systems also play a vital role. Efforts are underway to improve the content of surveys, data collection for major population groups, and timely access to data through public reports and data files. These national surveys and monitoring systems should be sustained, strengthened, and harmonized.

Continuing to strengthen the evidence base for effective community interventions and for the effective organization, administration, and financing of public health services is critical to the future development of public health infrastructure. Public health surveillance, services, and systems research play an important role in the development of this evidence base; support should be expanded over the decade, with a strong focus on translating research into practice. SEE: What Is Behavior Modification?

Public health in the US works in the public interest. Consider the positive impact in daily life attributed to public health policy and action:  food safety/restaurant inspections, fluoridated water, seatbelt use, unleaded gasoline, influenza vaccine programs, trans-fats and other nutritional information, public health response to the most recent disaster.

Control of infectious diseases—Infections (such as typhoid and cholera), major causes of illness and death early in the 20th century, have been reduced dramatically by improved sanitation. Also, the discovery of antimicrobial therapy has been critical to successful public health efforts to control infections such as tuberculosis and sexually transmitted diseases.

Healthier mothers and babies—Healthier mothers and babies are a result of better hygiene and nutrition, antibiotics, access to health care, technology in maternal and neonatal medicine, and immunizations. Since 1900, infant mortality has decreased more than 90%, and maternal mortality has decreased 99%. SEE: The 10 Qualities Of A Good Public Health Leader

WHO Definition of Public Health

What Is The Function Of Public Health?