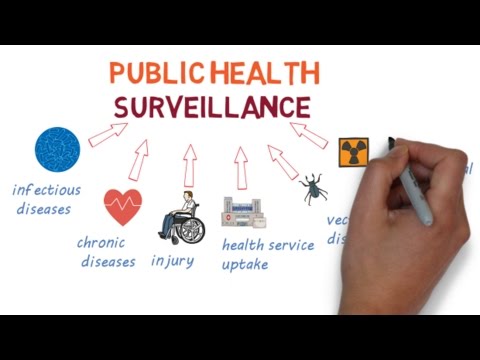 The World Health Organization (WHO) defines public health surveillance as the “continuous, systematic collection, analysis and interpretation of health-related data needed for the planning, implementation, and evaluation of public health practice. The term ‘surveillance’ is derived from the French word meaning ‘to watch over’ and, as applied to public health, means the close monitoring of the occurrence of selected health conditions in the population. Although surveillance methods were originally developed as part of efforts to control infectious diseases, basic concepts of surveillance have been applied to all areas of public health.

Public health surveillance is the epidemiological foundation for modern public health. Data resulting from the continuous monitoring of the occurrence of a disease or condition underlie what public health actions are taken and reflect whether these actions are effective. Surveillance may also include monitoring of risk factors associated with adverse health events. A surveillance system should be designed to meet the needs of a prevention and control programme, which generally includes a description of the temporal and geographical trends in the occurrence of a health event in a particular population. Most importantly, surveillance systems should identify changes in disease occurrence and in its characterization (for example, changes in antimicrobial resistance, changes in mortality). The data should be useful for substantiating patterns of both endemic and epidemic diseases.

General principles that underlie the practice of surveillance are essentially the same for all countries, regardless of economic development. Defining the objectives of a surveillance system depends on what information is needed, who needs it, and how it will be used. Implementing a system will require a balance of competing interests, and a clear statement of objectives will provide a framework for subsequent decisions.

Public health surveillance data are collected in many ways, depending on the nature of the health event under surveillance, potential methods for identifying the disease, the population involved, the resources available, and the goals of the programme. The widespread use of the Internet and electronic media has led to innovations in public health surveillance reaching far beyond traditional methods of disease monitoring on an individual patient basis. The performance of surveillance systems can be assessed by using a series of attributes, including sensitivity, timeliness, representativeness, positive predictive value, acceptability, flexibility, simplicity, and costs. Systems should be periodically or continually assessed as part of quality assurance. Surveillance provides a stimulus to keep prevention and control activities moving rapidly and in the right direction, guiding the response to individual cases as well as public policy.

The type of surveillance for a particular disease depends on the attributes of that disease and the objectives of the immunization programme. For example, when the objective of the programme is control of measles and surveillance for measles is started, the number of cases is high, and it is important to know where the cases are. Therefore, a system that covers the entire country is needed, but the details of individual cases are not. In contrast, when the number of measles cases is reduced and the programme objectives change to elimination, investigation of individual cases and transmission chains will become necessary. The type of public health surveillance include:

Active surveillance involves visiting health facilities, talking to healthcare providers, and reviewing medical records to identify suspected cases of disease under surveillance. Designated active surveillance staff regularly visit health facilities in person to search for suspected cases among persons who might have attended the facility. It involves the physical review of medical records and registers, interviews with health workers, and visits to relevant outpatient clinics and hospital wards. When a case is found, the active surveillance staff investigate it, document clinical and epidemiological data, arrange to send appropriate laboratory specimens, and report the information rapidly, according to national policy. This method is usually used when a disease is targeted for eradication or elimination when every possible case must be found and investigated. It is also used for outbreak investigations.

Regular reporting of disease data by all institutions that see patients (or test specimens) and are part of a reporting network is called passive surveillance. There is no active search for cases. It involves passive notification by surveillance sites and reports are generated and sent by local staff.

Passive surveillance is less expensive than other surveillance strategies and covers wide areas (whole countries or provinces); however, because it relies on an extensive network of health workers, it can be difficult to ensure completeness and timeliness of data.

Some countries might not have the capacity or resources to identify all cases of a disease, either because the diagnosis of the disease requires specialized clinical skills or because laboratory resources are not available throughout the country. Under these circumstances, passive surveillance can be adapted in a number of ways, depending on the completeness and quality of data required, financial constraints, and the availability of specialist skills and services.

A sentinel surveillance system is used when high-quality data are needed about a particular disease that cannot be obtained through a passive system. Selected reporting units, with a high probability of seeing cases of the disease in question, good laboratory facilities, and experienced well-qualified staff, identify and notify on certain diseases. Whereas most passive surveillance systems receive data from as many health workers or health facilities as possible, a sentinel system deliberately involves only a limited network of carefully selected reporting sites. For example, a network of large hospitals might be used to collect high-quality data on various diseases and their causative organisms, such as invasive bacterial disease caused by Haemophilus influenza type b, meningococcus, or pneumococcus.

Data collected in a well-designed sentinel system can be used to signal trends, identify outbreaks and monitor the burden of disease in a community, providing a rapid, economical alternative to other surveillance methods. Because sentinel surveillance is conducted only in selected locations, however, it may not be as effective for detecting rare diseases or diseases that occur outside the catchment areas of the sentinel sites.

The following criteria should be considered in selecting a sentinel health facility (usually a general or infectious disease hospital) :

WHO Definition of Public Health