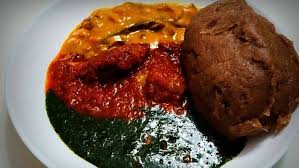 Àmàlà is a local indigenous Nigerian food made out of yam and or cassava flour, or from unripe plantain flour. Yams are peeled, sliced, cleaned, dried and then blended into a flour, also called elubo. Yams are white in colour but turn brown when dried; this gives àmàlà its colour. Àmàlà is from Western Africa and eaten mostly by the Yoruba people in Nigeria. Amala is mainly consumed by indegenious people of the Southwestern part of Nigeria. It could be served with a variety of ọbẹ (soups), such as ẹfọ, ilá, ewédú, ogbono or gbegiri (black-eyed beans soup).

Types of àmàlà and The Nutritional Benefits

This is the most common type of àmàlà which is derived from yam. The particular yam specie best for preparing àmàlà is Dioscorea cayenensis because of its high starch content. Yam, the common name for species in the genus Dioscorea, grows in Africa, Asia, the Caribbean, Oceania, and Latin America, but 95% of it is cultivated and harvested in West Africa. Yam can be barbecued, roasted, fried, grilled, boiled, smoked, and grated. Àmàlà isu is an African food made of dried yam; this gives it a black/brownish colour when added to boiling water. Amala is high in carbohydrates and packs a lot of calories.

The nutrient carbohydrate is what Amala isu is mostly known for but it contains other essential nutrients such as vitamins and minerals like vitamin C, phosphorus, manganese, vitamin B-complex, potassium, vitamin A, calcium, copper, iron etc. and also contains dietary fiber, protein and fats. Yam from which Amala isu is made has a high percentage of carbohydrates which makes it a good source of energy, the presence of dietary fiber in yam aids in digestion and prevents any form of constipation as well as suppressing the side effect of weight gain and diabetes. The presence of the vitamins in amala isu gives it an edge over other foods that do not have it, though some of these vitamins are in little quantity, it is still beneficial to health when prepared well. It also contains the highest amount of potassium nutrient alongside folate among other food which helps to lower hypertension and modifies the blood vessel for proper blood flow.

Amala isu is good for pregnant women as it contains many nutritional elements that is good for the baby and the mother as well. It contains Folate which is absolutely necessary for the brain and the central nervous system. In addition, Amala isu contains minerals such as (iron) that relieves pregnant women from early morning sickness such as nausea and vomiting as well as keeping the bones strong which is extremely important for fetus development. SEE Nutritional Value and Health Benefits of Kpomo

The second type is àmàlà láfún, made from cassava flour. Cassava is a woody shrub of the Euphorbiaceae (spurge) family. Cassava and yam are the most important source of food carbohydrate in Nigeria; Nigeria is the world’s largest producer of cassava. Cassava flour when used as a dry powder makes àmàlà láfún. Fermented and flaky, it is called Garri, another common dish, most often eaten by the Ijebu people.

Amala made from Cassava is free from gluten and a good source of dietary proteins and vitamin-K. Vitamin-K has a potential role in bone strengthening by stimulating osteoblastic cells activity in the bones. It also has an established role in the treatment of Alzheimer’s disease patients by limiting neuronal damage in the brain. Amala made from cassava carries some of the valuable B-complex group of vitamins such as folates, thiamin, pyridoxine (vitamin B-6), riboflavin, and pantothenic acid.

This food is one of the chief sources of some essential minerals like zinc, magnesium, copper, iron, and manganese for many inhabitants in the tropical belts. Also, it has adequate amounts of potassium (271 mg per 100g or 6% of RDA). Potassium is an important component of cell and body fluids that help regulate heart rate and blood pressure.

Amala Lafun contains fibers, which are not soluble in water. It helps in the absorption of toxins that enter your intestines. In that way, it improves your digestive health and keeps it chugging along nicely.

Another type of Amala is elubo ogede (which is usually lighter in color). The low carbohydrate level in plantain flour makes it a good diet for people diagnosed of diabetics and others who need a low-carbohydrate food. Unripe plantain is peeled, dried, and grated into boiling water to become amala ogede, light brown in colour when cooked. Unripe plantain Amala contains some amount of serotonin which dilates the arteries, improves blood flow and reduces homocysteine (a condition that causes coronary artery disease and stroke). SEE: Health Benefits and Side Effects of Aju Mbaise

Its richness in potassium makes it heart friendly by preventing heart attack and hypertension through controlling heart rate and blood pressure in our body and cell. Also, its fibre content is great for reducing cholesterols level which reduces the risk of developing any heart diseases. This type of Amala is a good source of vitamin B6 that can help in curing neuritis (inflammation of the nerve), and anaemia: a medical condition where someone is having low red blood cells in the blood, which causes weakness. With inclusive into meal plan and consumption, it can cure anaemia and neuritis and serves as a preventive measure. Unripe plantain Amala also can boost fertility in both men and women because it’s rich in vitamin B6. And B6 is responsible for regulating hormones (Including sexual hormones). As matter of fact, a deficiency in vitamin B6 can cause poor sperm development in men and poor egg development in women. See: Health Benefits of Unripe Plantain

How To Prepare Amala

The only ingredient needed when making àmàlà is boiling water and one of the types of flour. Once the water has come to a boil, the heat is reduced. The flour is added and stirred until all the water is absorbed. More hot water is added, then the dough is left to simmer for approximately five minutes. Then the dough is kneaded until it has the desired texture. Kneading the dough into a smooth paste is the most difficult part of making àmàlà. The Top 4 Healthiest Nigerian Food

Health Benefits and Side Effects of Garri