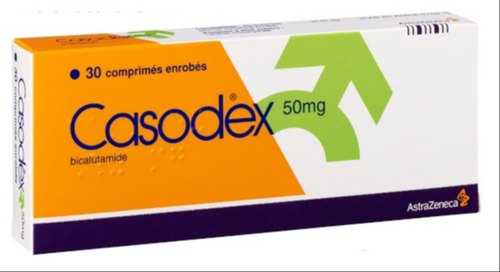 A counterfeit medication or a counterfeit drug is a medication or pharmaceutical product that is produced and sold with the intent to deceptively represent its origin, authenticity or effectiveness. Casodex (bicalutamide) is an anti-androgen. It works in the body by preventing the actions of androgens (male hormones). Casodex is used together with another hormone to treat prostate cancer.

Prostate cancer is the second most frequent cancer diagnosis made in men and the fifth leading cause of death worldwide. Prostate cancer may be asymptomatic at the early stage and often has an indolent course that may require only active surveillance. Based on GLOBOCAN 2018 estimates, 1,276,106 new cases of prostate cancer were reported worldwide last year, with a higher prevalence in developed countries. Differences in the incidence rates worldwide reflect differences in the use of diagnostic testing. Prostate cancer incidence and mortality rates are strongly related to age with the highest incidence being seen in elderly men (> 65 years of age). African-American men have the highest incidence rates and more aggressive type of prostate cancer compared to White men. READ: Top Health Benefits of Prostate Massage

Casodex is given as part of a combination prostate cancer treatment with another medicine called a luteinizing (LOO-tee-in-ize-ing) hormone-releasing hormone or LHRH. These medicines prevent the testicles from producing testosterone. Treatment with Casodex and LHRH is usually started at the same time. Follow your doctor’s instructions. LHRH is given as an injection or a tiny implant injected through a needle under the skin around your navel. LHRH injections are given at intervals such as once every 4 weeks.

The World Health Organization defines counterfeit drugs as those which is deliberately and fraudulently mislabelled with respect to identify and/or source.  A counterfeit medication or pharmaceutical product is produced or sold with the intent to deceptively represent its origin authenticity or effectiveness.  According to public health officials, counterfeit Casodex contains only 75% of the active ingredient, Bicalutamide, so within weeks of taking it, men could start suffering worse symptoms. It is not known how long the counterfeit drug has been available.

Pharmacists  and consumers are asked to note the following:

As a consumer, you may not have access to most of the test equipment used by regulatory bodies to verify the identity of a drug product as discussed in our previous article “Drug Product Faking: Methods for Testing Counterfeit Drugs”. The following tips will serve as a guide to purchasing genuine drug products.

Visual inspection as stated by the World Health Organization (WHO) (1999) still remains the first step in identifying potential fake drugs irrespective of the analytical methods used. This is because such observation serves as a lead to identifying fake products even in the absence of the knowledge of the physical characteristics of a genuine drug product. You are expected to examine carefully both the package and its content before purchase or use.

Examine the package and check if it appears suspicious or different from what you previously know.

Check if the security seal has been tampered with by looking for breaks or tears in the sealing tape and seals.

Check the legibility of the information on both the primary and secondary packages.

Check if the batch number, expiry date and manufacturer’s address on the secondary package are the same as that on the primary package.

Check if the manufacturer’s address is traceable, that is if it contains the exact location of the company and not just the country address.

Check if the registration number (NAFDAC number as the case is for products marketed or sold in Nigeria) is properly printed or if it appears to be tampered with.

Check for differences in the physical appearance (colour uniformity, size, shape, consistency etc.) of the drug. As stated by WHO, commonly encountered physical defects that should be looked out for in tablets include:

Excessive powder and/or pieces of tablets at the bottom of the container (from abraded, crushed or broken tablets);

Cracks or chips in the tablets, swelling, mottling, discolouration, fusion of tablets;

Appearances of crystals on the walls of the container or on the tablet.

Hardening or softening, cracking, swelling, mottling or discolouration of capsule shell should also be looked out for.

Also, check the organoleptic properties of the dosage form if you have been using the medication. SEE: Do Prostate Massages Help Prevent Cancer

How to Spot Fake Hydrochlorothiazide Tablets