Vodka is a clear distilled alcoholic beverage with different varieties originating in Poland, Russia and Sweden. It is composed primarily of water and ethanol, but sometimes with traces of other additives and flavorings. The traditional vodka consists of about 95 percent alcohol and high-quality vodkas are 96.5 percent alcohol. There is a lot of sophistication that goes into making other spirits, but vodka is the simplest spirit to make in the industry. It consists of only two parts: water and ethanol, 40 percent and 60 percent, respectively. That’s it. It technically has no taste, so enjoying the taste is basically saying you enjoy the taste of ethanol.

There are several types of Vodka which include; Belvedere Vodka, Absolut  Vodka, Grey Goose Vodka, Chopin Potato Vodka, Smirnoff Vodka, Hangar 1 Straight Vodka, Ketel One Vodka Haku Vodka, Khortytsa among others. However, in recent times  there have been media reports of Fake Vodka with devastating health  consequences. Fake and adulterated alcohol products are a major problem across the globe especially when it comes to expensive brands. The Markets are saturated with fake alcoholic drinks professionally counterfeited to look like the original. Fake alcohol is pretty much exactly what it sounds like: a bootleg distillate, very often sold as if it were legally produced. They can produce similar effects to ethanol in terms of making you feel tipsy. But they are also potentially very dangerous. Methanol has been implicated as the main culprit in many fake alcohol related deaths. Counterfeit alcohol in Costa Rica, for example, has recently been linked to 25 deaths, with a total of 59 patients confirmed to have required hospital treatment for methanol poisoning.

Commonly-used substitutes for ethanol include chemicals used in cleaning fluids, nail polish remover and automobile screen wash, as well as methanol and isopropanol which are used in antifreeze and some fuels.  Methanol is often deliberately added to alcoholic beverages as a cheaper alternative to ethanol, which is so-called normal alcohol that can be consumed, according to the Methanol Institute. Drinking just 25 to 90 milliliters of methanol can be fatal without proper medical treatment.

Drinking alcohol containing these chemicals can cause nausea and vomiting, abdominal pain, drowsiness and dizziness. It can also lead to kidney or liver problems and even coma. Methanol, a substance which can be used in fake vodka, may cause permanent blindness.

Alcohol counterfeiting is becoming very pervasive, fuelled by the sudden explosion of ecommerce sites over the past decade or so. Counterfeiters have taken note of the profits to be had by taking real drinks bottles and filling them with either their cheaply-made, dangerous swill, or with lower-quality alcohol and passing them off as authentic products to unsuspecting consumers. Ecommerce provide the perfect channels for this enterprise, not only as a source of customers, but also for the acquisition of the packaging itself.

It is estimated that a third of all alcohol production worldwide is illicit, and that number rises to a half in places such as Africa and China. This means billions of people worldwide are put at massive risk of health complications whenever they choose to take a drink. This mostly concerns the production of moonshine, meaning home-brewed alcohol which is never sold as an authentic product. However, the incredible volume of fake alcohol being produced worldwide surely offers counterfeiters a near-unending supply of drink.

According to the BBC, Criminal gangs are known to target festivals to flog their fake spirits to young people, who may be trying to save some money on their summer outings while enjoying drinks from brands they know and trust. Individuals with experience in working with certain shady bars may have encountered “pouring over”, the practice of giving customers a drink poured from the bottle of a high-quality brand, but which contains inferior or illicit alcohol inside.

The keys to safe drinking experiences are moderation of consumption and regulation of the product. Enjoying a few drinks with friends and sampling luxury vintages are generally harmless to most people because they’re enjoyed in reasonable, safe amounts. The responsibility of the manufacturers is to provide a beverage that is safe for consumers to enjoy. So when bootleggers counterfeit alcohol, they are forgoing this responsibility, and put lives in danger of extreme alcohol poisoning in the hunt for profit 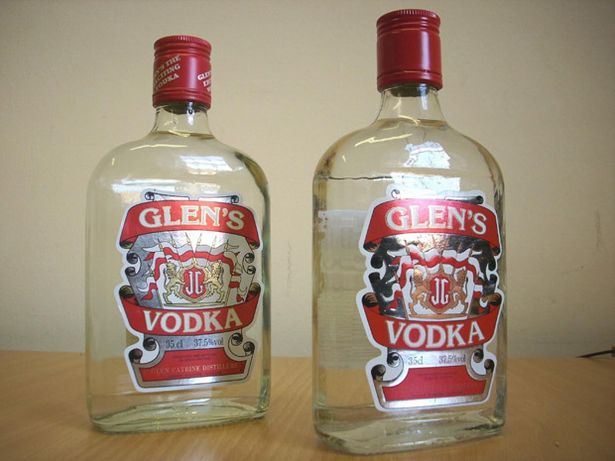 Fake vodka often smells like nail varnish and often tastes horrible. It can also contain sediment, pure vodka should always be clear. In addition Fake bottles of Vodka often have fake barcodes. If in doubt, there are apps that can check a barcode’s authenticity.

There have been numerous outbreaks of methanol poisoning from adulterated counterfeit or informally-produced spirit drinks in recent years, according to the World Health Organization. Countries affected include Cambodia, Czech Republic, Ecuador, Estonia, India, Indonesia, Kenya, Libya, Nicaragua, Norway, Pakistan, Turkey, and Uganda. The size of these outbreaks has ranged from 20 to more than 800 victims, with case fatality rates of 30 percent in some instances.

This information on Fake Vodka is provided as part of our harm reduction efforts. It’s important to note that alcoholism is a real disease. It can cause changes to the brain and neurochemistry, so a person with an alcohol addiction may not be able to control their actions.

Fake Vodka Symptoms You Should Know

How to Spot Fake Jack Daniels vs Real
Fake Vodka
January 25, 2021 Family & Community HealthPublic HealthComments Off on How to Identify Fake Vodka vs Real