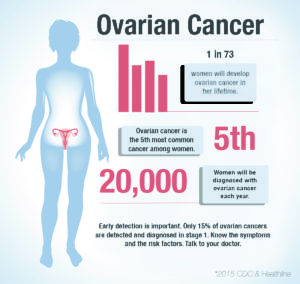 Ovarian cancer is a type of cancer which begins in the ovaries of a woman. The female reproductive system contains two ovaries, one on the left side of the uterus and the other on the right. The ovaries are about the size of an almond and they produce the hormones estrogen and progesterone but their primary role is the production of eggs or ova for fertilization. Detecting ovarian cancers can be a daunting task because they often show no symptoms and by the time ovarian cancer is considered as a possible cause of some symptoms, it usually has already spread to other parts of the body.

What are the early signs of ovarian cancer?

A pelvic exam can be useful in detecting female cancers at an early stage, However, most early ovarian tumors are difficult or impossible to feel. Pelvic exams may, however, help find other cancers or female conditions. Women should discuss the need for these exams with their doctor.

There has been a lot of efforts and research geared towards  developing a screening test for ovarian cancer. However, there hasn’t been much success so far. The 2 tests most often used to detect ovarian cancer in addition to a complete pelvic exam are:

Transvaginal ultrasound (TVUS)– is a test that employs sound waves to look at the female uterus, fallopian tubes, and ovaries. During this procedure, the ultrasound wand is placed into the woman’s vagina. It can help in detecting a mass (tumor) in the ovary. However, it cannot tell if a mass is cancer or benign.

The CA-125 blood test– This is another test used in detecting ovarian cancer, it measures the amount of a particular protein called the CA-125 in the blood. Most women with ovarian cancer have high levels of CA-125 protein in their blood. This test can be useful as a tumor marker to help guide treatment in women known to have ovarian cancer, because a high level of CA-125 often goes down if treatment is working.

Can you be fully cured of ovarian cancer?
For some people with ovarian cancer, treatment may remove or destroy the cancer. Completing treatment can be both stressful and exciting. For other people,ovarian cancer never goes away completely. Some women may be treated with chemotherapy on and off for years See: Alternative Cancer Treatment In Nigeria

How To Detect Prostate Cancer