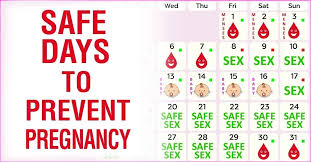 Unintended pregnancies are pregnancies that are mistimed, unplanned or unwanted at the time of conception. Sexual activity without the use of effective sexual orientation birth control through choice or coercion is the predominant cause of unintended pregnancy. About 85% of sexually active women who do not use contraceptives become pregnant within a year.

A woman can become pregnant while breastfeeding, from about 10 days after childbirth, and even during her menstruation. Withdrawal before climax and periodic abstinence does not prevent pregnancy or spread of sexually transmitted diseases. Knowing when you’re likely to release an egg (ovulate) can help you plan or avoid pregnancy. Find out when ovulation occurs in the menstrual cycle and when you can get pregnant.

When can I get pregnant?

During the menstrual cycle, an egg is released from one of your ovaries and travels down the fallopian tube. The egg only lives for 24 hours after ovulation, and a sperm must meet the egg within that period for pregnancy to happen. This doesn’t mean that a woman has to have sex on the day of ovulation, as sperm can survive in your body for several days after sex. If you want to get pregnant, having sex every couple of days will mean there are always sperm waiting to meet the egg when it’s released.

When does ovulation happen?

It’s difficult to pinpoint exactly when ovulation happens, but usually it takes place 10-16 days before the start of your next period. The first day of your period is day one of your menstrual cycle. The average cycle takes 28 days, but shorter or longer cycles are normal. “It’s not accurate to say that women are fertile on day 14 of the menstrual cycle,” says Toni Belfield, a specialist in sexual health information and a trained fertility awareness teacher.”If your cycle is 35 days long, you’re not going to be fertile on day 14 of your cycle. You’re more likely to be fertile around days 19-25. If you have a shorter cycle – for example, 23 days – you might ovulate around days 7-13.” See: 10 Top Signs Your Period Is Coming Tomorrow

There are many methods of contraception you can choose from to avoid pregnancy. Condoms are the only method that helps protect against both pregnancy and sexually transmitted infections (STIs). It’s difficult to know exactly when ovulation happens. So if you’re trying to avoid pregnancy, there isn’t a “safe” time of the month to have unprotected sex. For a woman with a shorter menstrual cycle (for example, 23 days), having unprotected sex during her period could put her at risk of pregnancy. “Sperm can hang around for seven days, and she might ovulate very soon after her period has finished.”

Tracking your fertile window is a way to determine your “optimal” time to get pregnant. It can also help prevent pregnancy if you aren’t trying to conceive. As a method of reliable birth control, it can take several months of recording your monthly cycle to figure out your fertile window.

How to track your fertile window

The following method will help you find out your fertile window.

How to use your fertile window as birth control

Ovulation will occur one day during your fertile window. The egg released is viable for 12 to 24 hours. That doesn’t mean you can get pregnant every day during this window. But if you’re trying to prevent pregnancy, you should abstain from unprotected sex during the entire fertile window. ALSO READ: Nigerian Foods and Beverages to Avoid During Pregnancy

Tools for tracking your cycle

To track your cycle, mark the first day of your menstrual cycles on the calendar or in your day planner. Do this over several months. You can also use a fertility app, such as Glow Ovulation or Clue Period Tracker, to help you keep track.

How do I calculate when my next period will be?

Add up the number of days, divide by 4 months, and you get an average of 30 days. With that number, you can predict the first day of your next period when adding 30 days to the last. So, if my last period started on February 2, I add 30 days and come up with March 4 for the first day of my next period.

Can I get pregnant 5 days before my period?

Although, it is possible to get pregnant in the days leading up to your period, it isn’t likely. You can only get pregnant during a narrow window of five to six days a month. Ovulation usually occurs in the middle of your menstrual cycle about two weeks before your period  but not everyone’s cycle is regular.

ALSO READ: Types Of Sanitary Pads and Tampoons In Nigeria